The three Al-Ummah operatives, who were arrested in a joint operation by the Andhra Pradesh and Tamil Nadu police after a 10-hour operation, have admitted that they had planned to target Modi during a political rally in Andhra Pradesh.

The arrested operatives -- Bilal Malik, Panna Islmail and Faqruddin -- reportedly sourced the explosives from Udupi in Karnataka. They hid the cache at their hideout in Puttur, Andhra Pradesh, from where they were finally nabbed by the police.

The trio told interrogators that they planned to use the six pipe bombs to target Modi’s rally that is scheduled to be held in Andhra Pradesh on October 18. They had planned a similar operation at Modi’s rally in Hyderabad but could not carry it out.

“We wanted to plant six pipe bombs around the venue to carry out a series of blasts and send across a very strong message. We had planned to target Modi’s rallies in south India,” they said.

During the earlier round of questioning, the arrested trio had revealed that they had included several BJP leaders from south India in their hit list.
The police even claimed that they had found a diary with the name of the targets.

This Al-Ummah group has been accused of murdering a BJP leader in Salem and targeting a rally by BJP leader L K Advani in Tamil Nadu.

The Andhra Pradesh police, who have been questioning the arrested terrorists, have informed their counterparts in Gujarat about the plan to target Modi.

A police team from Gujarat will soon question the trio to elicit more information about the plan to target Modi.

Police are also trying to find the source of funding for Al-Ummah which has no apparent links to other terror outfits. It generates funds from donations and one Abu Siddiqui is reportedly a major benefactor of the group.

The group operates on a small scale -- it needs only Rs 50,000 to carry out a terror strike and it has enough sympathisers who will finance such an operation. 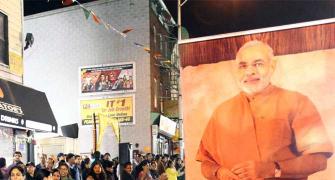 In Photos: Dancing the night away with Narendra Modi 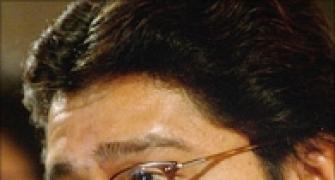 Rajnath not so keen on Raj any more