While the Bharatiya Janata Party threw a pantheon of star campaigners, Akhilesh Yadav's was virtually the lone face of his Samajwadi Party in the Uttar Pradesh elections. From distributing tickets to choosing allies, it was the SP president's one-man show.

At 48, he is a year younger to Yogi Adityanath, the UP chief minister and the man he hoped to send 'back to Gorakhpur'.

That didn't happen and the BJP has won another term in office.

Yadav fought hard, but his party was well behind the BJP.

Born in Saifai on July 1, 1973, Yadav entered politics in 2000, winning a Lok Sabha bypoll from Kannauj and is now the MP from Azamgarh.

He contested his debut assembly election this time, picking Karhal, a segment in his father's Mainpuri parliamentary constituency.

The SP president, who burnt his fingers by partnering with the Congress in the 2017 UP polls and had joined hands with Mayawati's Bahujan Samaj Party in last general election, this time chose to enter into an alliance with a string of small regional parties.

Briefly, he outmanoeuvred the BJP by inducting ministers Swami Pradesh Maurya, Dara Singh Chauhan and Dharam Singh Saini in an attempt to get the Other Backward Classes (OBC) on his side.

Yadav studied at the Military School in Dholpur, Rajasthan and then got his bachelor's and master's degrees in Civil Environmental Engineering from JSS Science and Technology University.

He also has a master's degree in environmental engineering from the University of Sydney, Australia.

Married to Dimple Yadav, Yadav has two daughters and a son.

In 2012, after a stint as the head of the SP's youth wing and then the party's UP president, he became, with his father's blessings, the state's youngest ever CM at 38.

In the early years of his term as the SP unit chief and the CM, he struggled with his father's legacy, tackling politicians like D P Yadav, Amar Singh and Azam Khan.

His uncle Shivpal Yadav brought in mafia don Mukhtar Ansari's Quami Ekta Dal into the SP, against his will.

Another uncle Ram Gopal Yadav remained on his side as Akhilesh Yadav tackled dissension in the party and the Yadav clan.

And just ahead of the 2017 assembly polls, Yadav staged a coup of sorts.

At an emergency convention of the party in January 2017, SP founder Mulayam Singh Yadav was ousted as national president and relegated to the post of its 'patron'.

The Bharatiya Janata Party was to call Akhilesh Yadav Aurangzeb, recalling what one Mughal emperor did to his own father.

Both sides approached the Election Commission, which ruled in the younger Yadav's favour, giving his faction the bicycle symbol.

In the past, Yadav has tried an image makeover for the SP.

As chief minister, he junked his party's declared opposition towards computers, announcing what is sometimes claimed to be the world's biggest laptop distribution scheme for students.

His government also took credit for launching development projects like the Agra-Lucknow expressway, a metro rail, an international stadium and a cancer hospital in Lucknow.

Yadav went to 2022 polls with the slogan 'Nayi hawa Hai, Nayi Sapa Hai (in the fresh breeze of air it's a different SP), which promised a 'new SP' to ward off attacks on the party's previous record on law and order.

He referred to the National Crime Records Bureau (NCRB) to challenge the perception that the BJP government has tackled crime better.

He also distanced himself from 'bahubalis' (muscleman-politician) like Raja Bhaiya popularly called 'Kunda ka Goonda' and Mukhtar Ansari, said to be close to the party during Mulayam Singh Yadav's time. 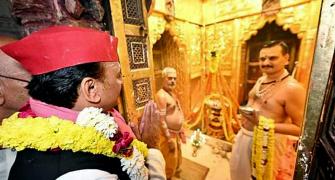 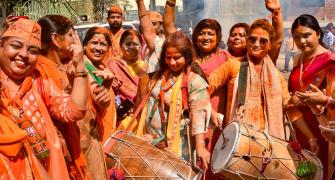 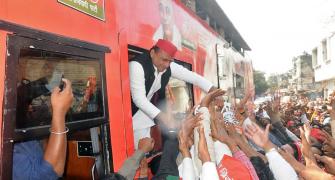 'Does UP CM know what thermodynamics is?'