Trinamool Congress supremo Mamata Banerjee and Rashtriya Janata Dal leader Tejashwi Yadav on Monday discussed the evolving political scenario in poll-bound West Bengal but there was no clarity yet about seat sharing. 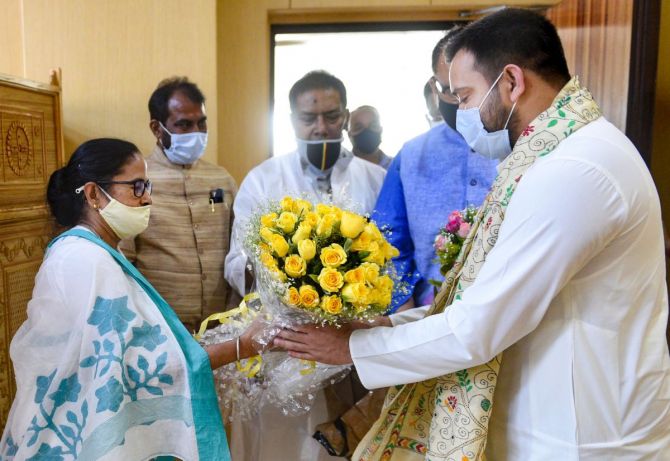 Emerging from a meeting with Banerjee, Tejashwi, the Leader of the Opposition in the Bihar assembly, said his first priority was to prevent the Bharatiya Janata Party’s forward march in West Bengal. He appealed to Biharis domiciled in the state to rally behind the West Bengal chief minister in the elections.

He parried questions by journalists after the meeting at the state secretariat about whether the RJD will be contesting a few seats in West Bengal in alliance with the ruling TMC, merely saying "When Mamataji is fighting, it is we who are fighting. We will put in all efforts to ensure that she wins. Our full support is with her and her party."

Tejashwi urged the people from Bihar living in West Bengal to stand with the ruling TMC, which is facing a stiff challenge from the BJP in its bid for a third straight term in office.

Banerjee, on her part, referred to Lalu Prasad, the jailed RJD supremo and Tejashwi's father, as a "father figure" to her with whom she shared "mutual respect".

She claimed Prasad, in jail following his conviction in fodder scam cases, was "deliberately" held behind bars as his freedom would have meant defeat for his rivals in Bihar, where assembly elections were held late last year.

She asserted the National Democratic Alliance government in Bihar will not last long and that the BJP's "dream" of clinching power in West Bengal will not come true.

Voicing her displeasure over an 8-phase poll in West Bengal, Banerjee said," I want the Election Commission to work impartially. I have full respect for the EC, but I do not want the BJP to control it."

Yadav, when asked why was he extending support to the TMC which is contesting the polls in West Bengal against its old ally the Congress, said," Our alliance (with Congress) is in Bihar. In Kerala, the LDF and Congress-led UDF are opponents."

The Left Front and the Congress have forged an alliance in West Bengal, while they are vying for power in Kerala.

Tejashwi Yadav criticised the Centre for "selling off" public sector undertakings, including the railways and enterprises in the oil and steel sectors.

West Bengal is home to a large number of Hindi speaking people from Bihar, Uttar Pradesh and Jharkhand, he said, adding the RJD's stand is to provide "full support" to Banerjee. "We will stand by her wherever required," he said.

He also accused the Nitish Kumar government in Bihar of neglecting migrant workers returning to the state during the COVID-19-induced lockdown, claiming more people died on streets than from the coronavirus disease.

"The BJP and its allies came to power in Bihar through deception. I appeal to people from Bihar living here to support Mamata Banerjee," he said, asserting the "double-engine" government of the NDA in Bihar and the Centre had failed to deliver in his state.

He said the BJP's promise of 20 lakh jobs made before elections remained unfulfilled in Bihar as also the central university status for Patna University, and a special economic package or special status for the state.