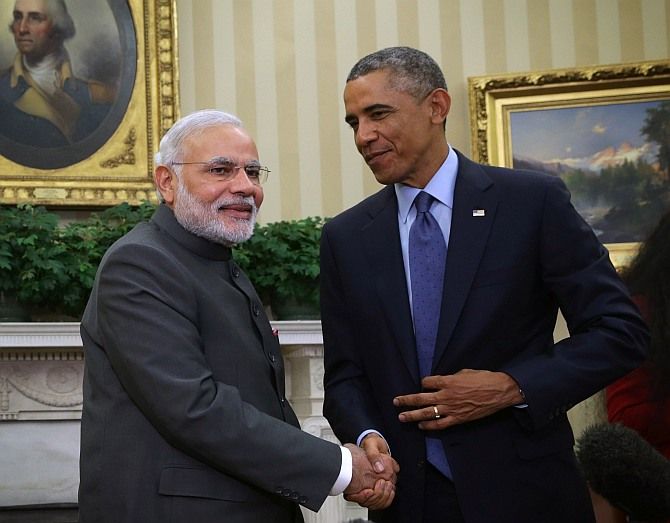 Afghanistan, Pakistan, and not India were on top of the priority list for the Obama Administration in South Asia, but the Indo-US relationship under the outgoing president is ending on a ‘high note’, according to a former Indian-American White House official.

“It (India-United States relationship during Obama Administration) is ending on a high note,” Anish Goel, the former Senior Director for South Asia at the National Security Council, White House, said.

In this position, Goel was one of the key players in the India-US relationship in the first two years of the Obama Administration that saw the first state visit of Prime Minister Manmohan Singh in November 2009 and the historic visit of President Barack Obama to India a year later.

Goel, a senior South Asia Fellow at the New America Foundation, a top US think-tank, said the relationship between India and the US has gone through some peaks and valleys.

“It started out very strong and then I think everyone knows in the middle years in 2011, 2012 and 2013 it was really short of a low point in the relationship. At that point you had administration officials on both sides openly criticizing each other,” said Goel, who headed the India desk at the White House in his first two years of the Obama presidency.

“You had cases being filed in WTO (World Trade Organisation), India blocking things that was a priority for the US and on top of things you had (Devyani) Khobragade episode, which really exposed sort of a tenuous relationship. So that was the point when everybody wondered if the relationship could cover or this is really going to be how the two countries interacted,” he noted.

“But it is ending on a high note. The relationship has really recovered since that time. The flurry of activities in the last two years is great. Both sides deserve credit. The Obama Administration was ready to move forward,” Goel said.

After Modi became the prime minister, the relationship has seen an upward trajectory, he said.

“And, I think, Prime Minister Modi deserves enormous amount of credit for putting the relationship back on track. He could have taken a very, very different approach and he could have said that this is a country that denied me entry for 10 years and we have been at loggerheads for the past three years, and that this relationship is not that important for me and I am going to keep a different track,” Goel said.

“But he did not. He put aside all of that in the background and said it is important for India to have a string relationship with the United States. I think, he moved forward in this regard,” Goel said, giving credit for the revival of the relationship to Prime Minister Modi.

Responding to a question on Obama’s vision on India when he occupied the White House, Goel recollected that he wanted to continue the strong relationship.

“One of the successes of the Bush Administration had been building a strong strategic partnership with India and President Obama wanted to continue that. He might not have been quite enthusiastic as President Bush was but he certainly wanted to keep the relationship going,” he said.

“I think that is obvious by the fact that the first state visit was by Prime Minister Singh. It was a very conscious signal, a warming to a very strong relationship with India, demonstrates that the Obama Administration was going to do things little bit differently and that a country like India was very important to the United States. That was the broad direction that was given,” Goel said.

At the same time, Goel observed that India certainly was not a top priority for Obama when it came to South Asia.

“On South Asia, I do not think India was the top priority. Afghanistan was. That’s not a secret,” he said.

“I think, coming into office President Obama one of his campaign promises was to really take on the fight in Afghanistan and finish the war that President Bush started. So that was the top priority in South Asia. The Administration was very strongly tied to Pakistan for the efforts in Afghanistan. You saw the structures that they created,” Goel said.

Afghanistan was so important for President Obama that everything was seen through that prism, Goel asserted.

“He campaigned on a pledge to add 30,000 more troops to Afghanistan so that the mission can really be finished. But when he came into the office he ended up adding more than 30,000 troops. I think it was 100,000 troops. So committing that level of resources and attempting to start a real strategic partnership with Pakistan, demonstrates the priority that the Administration placed on those two countries,” he said, adding that in 2009 and 2010 the Administration rolled out a red carpet for Pakistan.

“When (the then Pak Army Chief) General (Ashfaq Pervez) Kayani came to Washington, he received top high level meetings. There was a real concerted effort to get the Pakistanis to act in our interest out of the belief that the answer to Afghanistan ran through Islamabad, ran through Rawalpindi, actually to be more precise. I think that was the mindset,” he said.

“President Obama knew that Afghanistan would be some part of his legacy...good or bad. If he was going to bring it to some kind of satisfactory conclusion it would be part of his legacy and if it was not then...he was going to have owned the Afghan war, because it was he who was committing to so many troops to Afghanistan. I think the Administration did everything it could in the first two years to turn the war in Afghanistan,” Goel said.