It was an emotional meeting when National Conference president Farooq Abdullah met his son Omar Abdullah in the sub-jail in Srinagar where he has been under detention for over the last seven months. 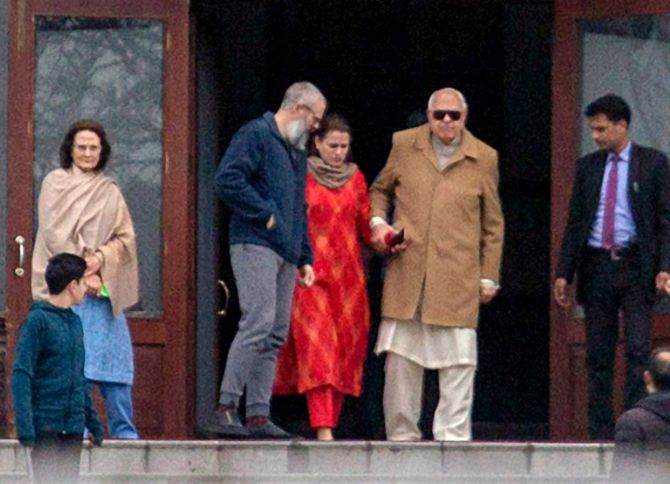 Released on Friday after his detention under the stringent Public Safety Act (PSA) was revoked, former chief minister Farooq Abdullah drove from his residence to nearby Hari Nivas where his son, also a former chief minister, has been held first under preventive custody since February 5 under the PSA. The two warmly embraced.

The 82-year-old leader had requested the Jammu and Kashmir authority for permission to see his son for the first time in seven months and the same was granted, officials said, adding that the two were together for about an hour.

Farooq Abdullah, Omar Abdullah and other leaders, including another chief minister and People's Democratic Party (PDP) president Mehbooba Mufti, were detained on August 5 last year, the day the Centre withdrew special status of the erstwhile state.

The NC president was booked under the PSA on September 15 while his son was booked hours before his six month tenure of preventive detention was to come to an end on February 5 this year.

Meanwhile, Leader of Opposition in Rajya Sabha Ghulam Nabi Azad on Saturday met the National Conference president and demanded that all detained leaders from Jammu and Kashmir be freed and democracy restored.

After a two-hour meeting with Abdullah at the latter's residence in Gupkar area of Srinagar on Saturday afternoon, the Congress general secretary told reporters that for the progress of Jammu and Kashmir, its leaders should be released and 'not kept in cages like a parrot'.

Calling for release of all other leaders and individuals, including former chief ministers Omar Abdullah and Mehbooba Mufti, to restart the political process in J-K, Azad said elections should be held and statehood restored to Jammu and Kashmir. 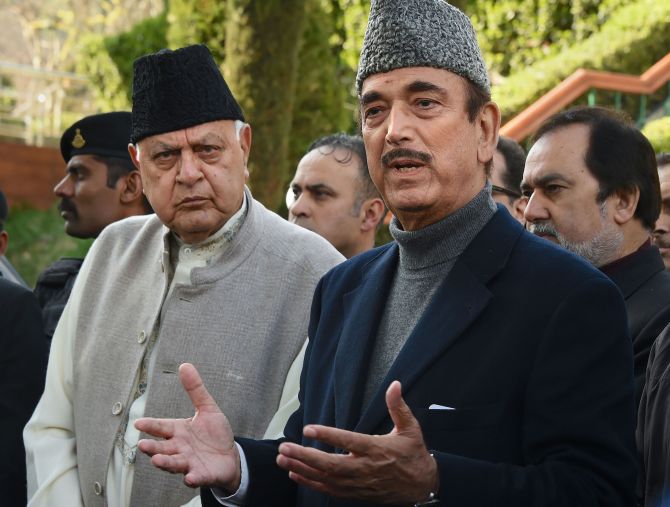 Azad said he met Abdullah on behalf of his party as well as all those MPs and parties who have been raising their voice inside Parliament and outside for the release of J-K leaders.

"First and foremost, democracy should be restored in J-K for any political process to start," Azad said.

Asked about the demand for restoration of Article 370, the Congress leader said, "Let us go one by one... Let democracy be restored. First, let this happen, then that (Article 370)."

"Let us first restore democracy and democracy can be restored once all the leaders who are behind bars either in jails or in guest houses or under particular Act, they have to be released first. Let the political process start first.

"Let every individual of J-K be released from the jail. Let democracy prevail first and then we can pick up other fights," he said.

Azad, who is also a former chief minister of J-K, said the political process should be started soon.

"J-K is the country's largest state. In 1947, 560 states were merged to form 12 states, but J-K was the only state in India which was not joined by any other state as it was large enough.

"It is disrespectful and disgraceful for the people of J-K that it was changed to a Union Territory. I want that the leaders be released sooner and J-K be changed to a state.

"Political process is a basic right in a democracy. India is not known for its size world over, but for its democracy. But, not this democracy where three former chief ministers are jailed for several months or another ex-chief minister has to come here with the Supreme Court's permission.

"When CMs, MPs, ministers MLAs, MLCs are in jail, then where is the democracy?" he said.

Azad said for the development of Jammu and Kashmir, it is necessary that the political process is started.

"If J-K has to progress and move forward and if we have to bring prosperity in J-K, then its key lies not in keeping leaders in a cage like a parrot, but in releasing them and starting a political process by which elections are conducted here. Whichever government is elected by the people of J-K, that will work on the development of J-K," he said.

Asked about his views on creation of Jammu Kashmir Apni Party and if it was a step towards restoration of political process in the Union Tterritory, Azad said, "In the last 47 years, several attempts have been made to form such parties. J-K and democracy cannot be run through agency (created) parties, but only through the elected governments."

Azad expressed happiness over his meeting with Abdullah.

"It is a matter of great happiness that I met him after seven-and-a-half months. He was detained for all these months and we do not even know the reason. Usually someone is detained if he breaks the law or has taken out a protest against the country or the government.

"However, he and Omar and Mehbooba and others were detained a day before Article 370 was revoked, so there is no question of any wrongdoing," he said.

The Congress leader said the members of Parliament were yearning for the release of the NC president and his detention was the 'biggest atrocity on him by the government'.

"I am here not only for myself. We have been friends for about 40 years and which will continue. I am here also on behalf of my party as well as all those MPs and parties in the Lok Sabha and Rajya Sabha who have been raising voices inside Parliament and outside it for the release of these leaders. All those MPs were yearning for his release.

"I understand how many difficulties he had to pass through. It was too cold this time after so many years and then his health.... However, when God is with someone, no one can harm him," he said.

Abdullah expressed his gratitude to Azad and all those leaders who had pressed for his release.

"I thank him for coming here to enquire about my health. He had earlier also made attempts," Abdullah said. 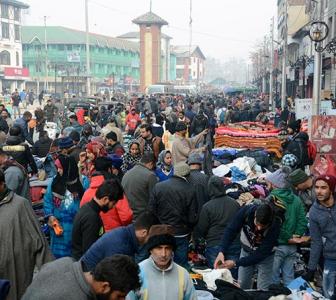 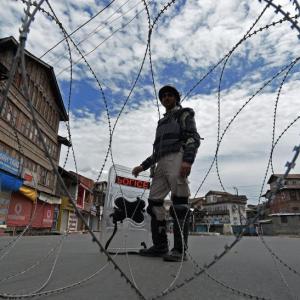