The police driver who died that night 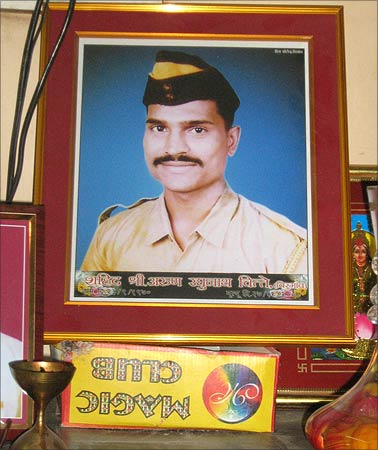 Arun Raghunath Chitte joined the Mumbai police in 1995 as a driver. He spent ten of his 13 years in service as Inspector Vijay Salaskar's driver.

Salaskar had accounted for almost 80 Mumbai gangsters. Chitte was with him through those encounters.

Though he was not with his boss that fateful night, both Chitte and Salaskar were killed by the same terrorists within minutes of each other.

After the terrorists left the Chhattrapati Shivaji Terminus station after killing nearly 60 people, they walked across the bridge at the end of platform one, and came into the lane behind the Cama hospital where they gunned down senior police officers Hemant Karkare, Ashok Kamte and Vijay Salaskar along with two police constables.

The terrorists then raced away in the police Qualis used by the slain police officers. At the Metro cinema junction, they randomly fired at another police vehicle parked there. In the firing, Chitte lost his life, minutes after his boss died.

Inspector Sanjay M Jagdale, who is in charge of the Nagpada police station, , central Mumbai, where Chitte was posted, says, "He was a good and brave man. Always punctual, which is very important for this job."

One of Chitte's fellow drivers adds, "He had no bad habits. He was Salaskar's driver and Salaskar had no vices. Salaskar frowned upon people who smoked, drank or chewed tobacco. He wouldn't object, but would tell the offender to keep a distance from him. Arun Chitte did not have any habits that would displease his boss. It was obvious that Salaskar liked him. How else would he have the same driver for ten years? He always asked for him."

Manisha remembers him as a loving family man, very conscious about duty. He used to come home at 11 pm or midnight and then leave early the next morning: "'Saab (boss) just called, I am going,' he would say and leave for work. He used to do a 12-hour duty and not the stipulated 8 hours. If I asked him when he would return, he would say, 'When the crime is solved.'"

"Even on holidays if his boss called him, he would leave at once," continues Manisha, who will stay in Mumbai and educate her children in the city. She will continue to receive the salary drawn by her husband till his retirement and then his pension subsequently.

Chitte did not have any insurance policy, but Manisha will be compensated by the Employee State Insurance Scheme. The compensation received for his death from the state government has been invested in a fixed deposit account.

She has studied up to Class X and is eligible for a job with the police, but she refused, citing the responsibility of looking after her daughters. The job will now be given to her husband's younger brother, Sahibrao Chitte.

Text and Photograph: A Ganesh Nadar