Terrorists behind killing of J-K constable eliminated in encounter

Three terrorists, including a Pakistani, involved in the abduction and killing of a police constable were killed by security forces in an encounter in Kulgam district of Jammu and Kashmir on Sunday, the police said. 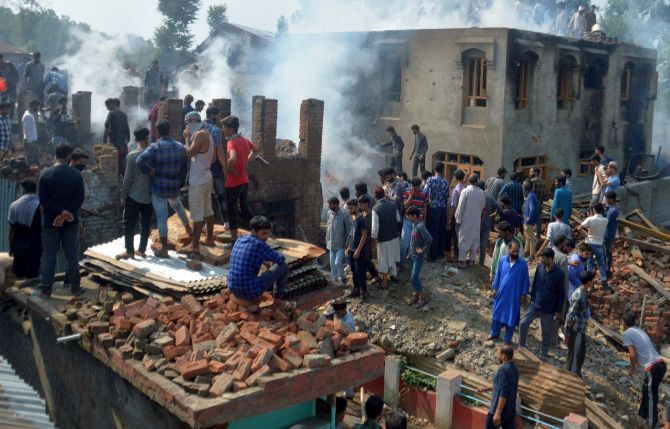 IMAGE: Villagers inspect the debris of a damaged house where three terrorists were killed during a gunbattle with security forces. Photograph: Umar Ganie/Rediff.com

Constable Mohammad Saleem Shah, who was on leave, was abducted by terrorists from his residence in Mutalhama area of Kulgam in south Kashmir on Friday.

His body was recovered from a nursery near village Redwani Payeen on Saturday. The body bore severe torture marks indicating that he was “brutally tortured to death” by the terrorists, a police spokesman said.

The spokesman said a joint patrol of security forces launched searches at Redwani area in Kulgam district in south Kashmir this morning after receiving credible inputs about the presence of the terrorists in a cluster of houses.

“As the security forces advanced, hiding terrorists fired resulting in a brief encounter in which three terrorists were killed. No collateral damage occurred during the encounter,” the spokesman said. 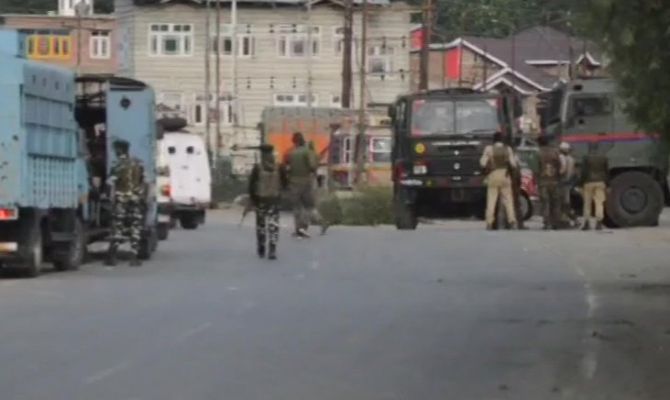 IMAGE: Security officials reach the spot where the terrorists were holed up. Photograph: ANI/Twitter

“Concerted efforts of the security forces resulted in the elimination of the prime accused involved in yesterday’s abduction and killing of Constable Saleem Shah at Kulgam,” a police spokesman said.

He said on the basis of the incriminating materials seized, the killed terrorists were identified as Muawiya, a foreigner of Pakistani origin, Suhail Ahmad Dar, a resident of Redwani Balaa and Mudassar alias Rehaan of Katarsoo.

“All of them were involved in the killing of Constable Saleem. As per police records, the terrorists were affiliated with the proscribed terror outfit Lashkar-e-Tayiba and Hizbul Mujahideen,” the spokesman said.

He said Muawiya’s involvement was established in a number of civilian killings. Suhail, who was working as a labourer earlier after he had dropped out from school, had later joined a terrorist outfit.

“Police probe is on for ascertaining complicity of the other co-conspirators who assisted in the commission of the gruesome crime leading to the death of police person Saleem,” he said.

Some arms and ammunition including, but not limited to, two AK 47 rifles and a carbine have also been recovered from the site of encounter, the spokesman said, adding police have registered a case and investigation has been initiated into the matter.