News
Business
Movies
Sports
Cricket
Get Ahead
Money Tips
Shopping
Sign in  |  Create a Rediffmail account
Rediff.com  » News » 'Whatever number of seats the BJP gets, Modi will be the leader'

'Whatever number of seats the BJP gets, Modi will be the leader'

'I don't buy the theory that if the BJP gets less than 220 seats or 200 seats, there will be a change in leadership.' 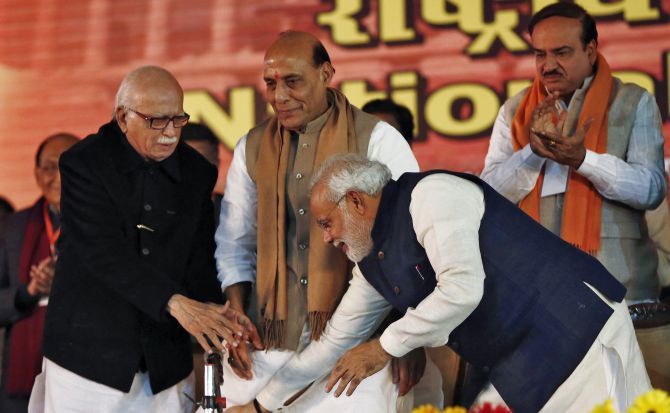 The run-up to the next Lok Sabha election will see "a lot of to-ing and fro-ing", says former Union finance minister Yashwant Sinha, hinting at more parties leaving the National Democratic Alliance fold, including the latest entrant, the Janata Dal-United.

In the four years since coming to power, the Bharatiya Janata Party has had several allies complaining of its 'big brotherly' behaviour, with some like the Telugu Desam Party quitting the NDA in a huff.

Moreover, even senior BJP leaders who try to not work under the looming shadow of Prime Minister Narendra Damodardas Modi do not get support as they otherwise should have, the recent trolling of External Affairs Minister Sushma Swaraj being a case in point.

What should such leaders expect if the duo of Modi and BJP President Amit Anilchandra Shah strengthens their grip on power after the next general election?

"Well, there are a lot of vacancies in the Margdarshak Mandal," Sinha, who quit the BJP in April to plow his own furrow, tells Rediff.com's Utkarsh Mishra. The first of a two-part interview:

It seems unlikely that the BJP will repeat its 2014 performance, but will the existing NDA get a majority? Or will it need to get back an ally like the TDP?

Now the point is whether they can retain that majority or not, before we discuss the allies.

Now that majority is highly doubtful.

In the meanwhile, as far as the allies are concerned, they have lost TDP.

The Shiv Sena is obviously in a foul mood, so are some of the BJP allies in Bihar, including the latest ally, Nitish Kumar.

So the only all-weather ally which is likely to stay with the BJP is the Akali Dal, and there also, there are a lot of murmurs.

But at the moment, it appears that the BJP will not be able to repeat the performance or retain the allies it had in the NDA in 2014.

If the BJP doesn't get a majority on its own, will the sulking or estranged allies agree to support Modi again as PM?

That remains to be seen. First of all, it depends on how many seats the BJP gets by itself, and then the question of leadership will come.

I don't buy the theory that if the BJP gets less than 220 seats or 200 seats, there will be a change in leadership.

I personally feel that Mr Modi is firmly entrenched, and with Amit Shah there, whatever the number of seats the BJP gets, it will be Mr Modi who will be the leader.

What can leaders like Sushma Swaraj and Rajnath Singh expect in case the BJP wins a thumping majority? Do they run the risk of being marginalised further?

Well there's a famous Margdarshak Mandal. It has many vacancies because there's no limit to it.

While launching your Rashtra Manch you said you would work to unite non-BJP parties. Do you see the Opposition parties uniting and fielding common candidates against the BJP in all Lok Sabha seats?

There are many problems on the way. But that is the only way the Opposition parties should take on the BJP, namely unite and put up candidates on a one-on-one basis.

Some of the smaller parties fear that despite being unpopular, the Congress would want a bigger share in the grand Opposition alliance.

That remains to be seen. At the moment everything is unclear because no serious discussion has taken place.

But as the elections approach, I am sure the issues will have to be sorted out, including what should be the relationship of the regional parties with the Congress.

Is the Congress's ego coming in the way of Opposition unity?

It's not the question of Congress ego. They know very well where they stand.

It's a demand of the time that everyone shed the ego that they have and work for Opposition unity, including the Congress.

Would it help the prospective grand alliance if the Congress agrees to take a back seat?

All these are things to be worked out in the future, it can't be answered. It's not possible to answer the question at this time.

The JD-U wants Nitish Kumar as the NDA's face in Bihar. This has irked other BJP allies like the Rashtriya Lok Samata Party. Can Nitish or other Bihar allies of the BJP join the Opposition grand alliance before elections? Will they be accepted?

There will be a lot of to-ing and fro-ing before the next election. The structure of alliances that you see today will not exist in their present form.

The BJP has mastered the art of headline management.
When the rupee falls or petrol prices rise, they hold protests against the Emergency. The BJP is 'celebrating' GST while remaining mum on the disastrous note ban. How should the Opposition fight that?

The Opposition will have to match the BJP's communication skills, one.

And two, it depend on the good sense of the people.

Because the people will not be taken in by these gimmicks. 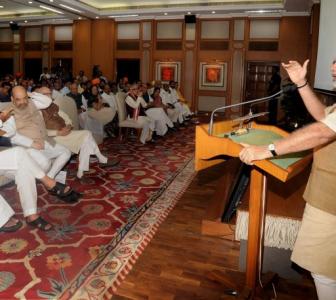 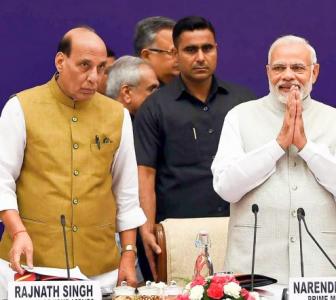