'My passion is dancing and music. What is wrong with that?' 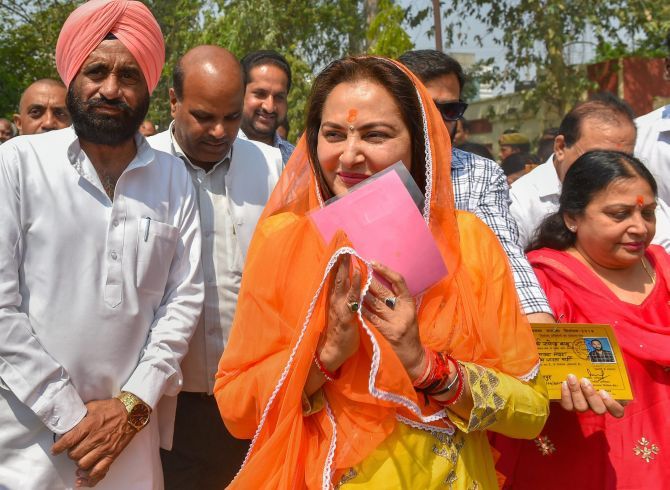 A day after the Lok Sabha constituency of Rampur in eastern Uttar Pradesh went to the polls, actress Jaya Prada, the Bharatiya Janata Party candidate, is confident she will win.

A two-time MP (2004, 2009) from Rampur on a Samajwadi Party ticket, she has been making headlines not for her prowess as a politician, but her long-standing feud with Rampur's SP leader Azam Khan.

Speaking to Rediff.com's Swarupa Dutt over the phone from the party office in Rampur, she says she believes in the BJP ideology, which is development for all unlike the SP which plays the minority card.

"The BJP works for the people. For development, for women, for the poorest of the poor. That is the ideology. I identify with it," Jaya Pradha declares.

Do you think Rampur voted for you?

People in Rampur want change and this is a matter of women's respect, so I believe people will vote for me.

Samajwadi Party chief Akhilesh Yadav claims that EVMs are faulty in Moradabad. Do you believe EVMs can be rigged to favour the BJP?

They are all scared. They have already accepted defeat. So yeh sab bahana bana rahe hain. (It's just an excuse).

Azam Khan's wife has said UP CM Yogi Adityanath has called you an artist and since singing and dancing is a part of art there is nothing wrong with their son's remark calling you Anarkali.

Being a woman herself, she should think before she makes these comments.

Will any woman accept being called Anarkali? 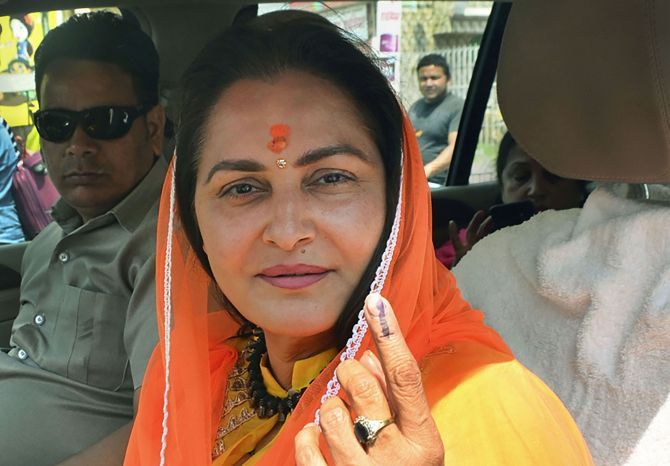 I did not say anything wrong.

Azam Khan is commenting on me and the colour of my inner wear... he wears dark glasses, so how can he see the colour of what I wear under my clothes?

I expressed my apprehension that maybe he has a mechanism by which he can see the colour of women's inner wear.

Does the silence of women MPs in the Samajwadi Party like Jaya Bachchan and Dimple Yadav or for that matter the BSP's Mayawati disappoint you?

Look, when (Azam Khan's son) Abdullah's mother can support him even though she is a woman, what can I expect from others?

I don't have any expectations or hope that Jaya Bachchan (SP Rajya Sabha MP) will speak out against the sexist remarks made against me.

Neither will Dimple Yadav (the SP's Kannauj MP and Akhilesh Yadav's wife) help or support me.

They are all in the same party.

In fact, I remember during an election rally earlier, he had abused her, but she said nothing.

She had told me she was upset.

Now she says Azam Khan's comments about me are chhotein batein (small thing). When will it be badi batein (big thing)?

In 2004 when you made history in Rampur by defeating sitting Congress MP Begum Noor Bano by 85,000 votes, it was Azam Khan who introduced you to the electorate. You are bitter rivals now. Don't you want to bury the hatchet?

The fight between us is his doing. He is responsible for the bitterness; I haven't done anything. I went back to Mumbai and was doing films.

Azam Khan knew that when he brought me here.

My passion is dancing and music. What is wrong with that? We are artistes, we contribute to society.

I never started the fight, he did.

He forced me to leave Rampur.

So why did you return to Rampur? Did you consider asking the BJP to give you a ticket from another constituency?

I was not in active politics. I returned because people want me back in Rampur and senior leaders like Narendra Modi and Amit Shah wanted me to contest from Rampur.

What are the problems in your constituency?

The lack of jobs, poor facilities for higher education, no development, now water.

Azam Khan has killed industry in Rampur and I want to turn the clock around. 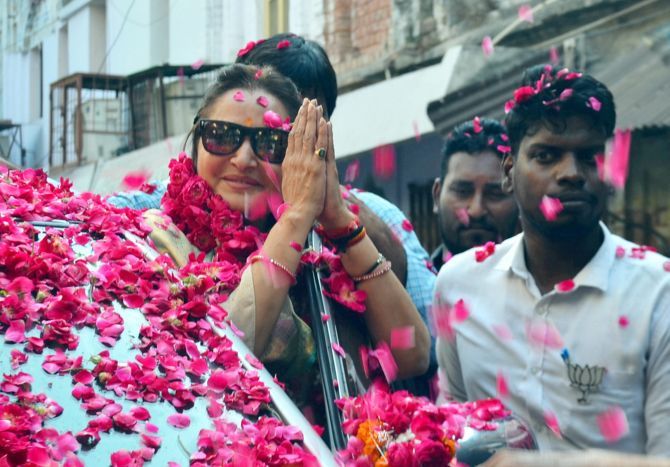 The Congress candidate is expected to eat into BJP votes. What's plan B if you lose?

This is an idea put forth by the gathbandhan (SP-BSP alliance in UP). The truth is that people have faith in the BJP.

They have seen the developmental work that has taken place under PM Modi in the rest of the country and they want Rampur to benefit from his work.

How did you reconcile to the differences in ideology between your former party, the Samajwadi Party, and your present party, the BJP?

I sacrificed my career and left everything and worked hard to help him become CM.

But when these netas get to a position of power they forget the cadre, people like us who worked for them. Nobody can work for Chandrababu if you value your self-respect.

I moved to the SP. I worked for them for 10 years. But they don't have any ideology. They work only for Muslim votes because that's how they feel they will win.

The BJP works for the people. For development. For women. For the poorest of the poor. That is the ideology. I identify with it.

If the SP is pro-Muslim, isn't the BJP perceived to be anti-Muslim, anti-minorities?

NO, never! Their development schemes are for all communities.

The Ujjawala Yojana (LPG connections to women from Below Poverty Line households) for instance is for everyone. They have only one ideology and that is development. 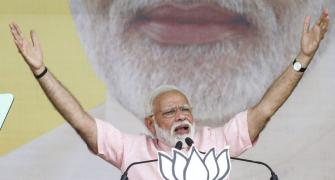 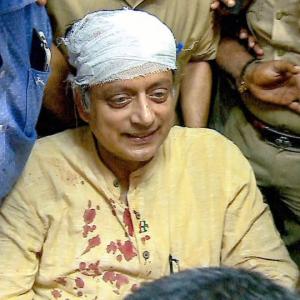 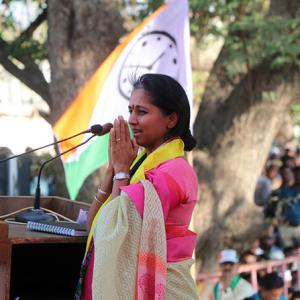