'If these two parties come together, there could be amalgamation of OBC, Dalits and Muslim votes.' 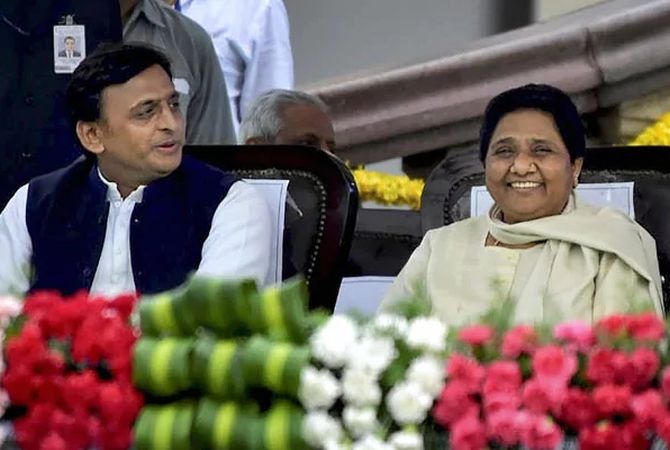 Aiming to capitalise on their bypoll victories, Samajwadi Party chief Akhilesh Yadav and Bahujan Samaj Party chief Mayawati have forged an alliance for the 2019 Lok Sabha poll in Uttar Pradesh.

Both the parties have left out the 'insignificant Congress' from the alliance.

The politically crucial state sends 80 MPs to the Lok Sabha.

In the 2014 parliamentary election, the BJP won 71 Lok Sabha seats, securing 42.63% of the votes, while its ally Apna Dal bagged 2 seats.

The Congress registered wins in two seats, Amethi and Rae Bareli, bagging 7.53% of the votes.

In the 2017 assembly election, which the SP fought in league with the Congress, the two parties together won just 54 seats.

"The experience of Akhilesh with the Congress was not good in the 2017 Uttar Pradesh assembly election," Dr A K Verma, director, Centre for the Study of Society and Politics, tells Rediff.com's Syed Firdaus Ashraf.

How do you look at the BSP-SP alliance for the 2019 Lok Sabha election?

It is an important development in UP.

I think the BJP is also a little worried about them coming together.

The entire focus is that if these two parties come together, there could be an amalgamation of OBC, Dalits and Muslim votes.

If these three segments get together, there could be a potential challenge to the BJP in UP.

That is why at this moment this new development appears to be important for everybody.

Why was the Congress left out of this alliance? Doesn't the party bring any value to the SP-BSP alliance?

The Congress has been doing very badly in both assembly and parliamentary elections.

The experience of Akhilesh with the Congress was not good too in the 2017 Uttar Pradesh assembly election.

This could be one reason why Akhilesh was not interested.

Since December 5, 1989, the Congress has not been able to show (much of strength) in UP.

If the Congress had joined the SP-BSP alliance, they would have to let go more seats (for the Congress).

If they had given up more seats, then there could be a revolt within their own parties.

Later on, if the Congress does well on its own, the doors are always open for it.

The SP and the BSP are not contesting from Amethi and Rae Bareli (Rahul Gandhi and Sonia Gandhi's Lok Sabha constituencies) out of courtesy.

The Congress did well in the 2009 general election though, winning 21 of the 80 Lok Sabha seats in Uttar Pradesh.

The 2009 (general) election was very strange.

They retained only Kanpur, Amethi and Rae Bareli (out of these 9).

That was a very surprising result even for the Congress.

Unfortunately, the Congress could not capitalise on that win and wasted all the advantages they gained.

So, 2009 can be considered an exception as the Congress was not being careful in selecting local grass root candidates.

It was importing candidates in constituencies and that was becoming counter-productive.

In the 2017 assembly election the BJP benefited from development schemes like Ujjwala Yojana providing free cooking gas. Will it repeat the same now with more developmental projects?

Development is a very tricky word.

Development is not looked as a homogeneous and uniform construct.

Many people have their own concepts of development.

Development is different for everybody.

Whatever development you do, you pump in a lot of money.

No development is possible without money.

When it comes to pumping money in developmental projects, one segment which really benefits is the bureaucracy. There is rampant corruption.

It is very difficult to handle corruption since the days of Kautilya as it was acknowledged as a part of administration then.

This harms development and every political party needs to be worried about this.

In some places, politicians get into a liaison with the local bureaucracy and both indulge in corruption.

This is the greatest obstacle in development.

The prime minister's image is a different issue as the focus should be whether this alliance on the ground stands or not.

At the moment for me, it is a very crucial question.

Will the bypoll results in Gorakhpur, Phulpur, Kairana and Muzaffarnagar, where all the parties came together to defeat the BJP have any effect on the 2019 election?

The SP and the BSP have kept in mind this model.

Results in these elections come against the incumbent government.

I would not be interested in making too much out of by-election results.

I would give you two pointers.

When the SP-BSP comes together, there are two basic things that happen.

One is the positive impact of the alliance and other is the negative impact.

The positive impact is the transferability of votes in respective constituencies.

This thing happened in (the) 1993 (UP assembly election) as they (SP-BSP) formed the government then.

This kind of alliance did not happen since 1995 after the Lucknow guest house incident.

Now this kind of alliance is taking place after a quarter of a century, as much water has flowed in the Gomti since then.

Mayawati is competent to transfer Dalit votes to whomever she wants to. But can Akhilesh do it?

Is he competent enough to do that?

Can he transfer his party votes to Mayawati?

That is a million dollar question.

The kind of hold Mayawati has over Dalit votes, Akhilesh does not have that kind of hold on his constituency.

We saw that it did not work in 2017 as Akhilesh could not transfer the votes (to the Congress party).

The transferability aspect did not work.

The negative impact of this alliance is that probably half the aspirants of Akhilesh would be dispirited as they would not get Lok Sabha tickets.

Where these men will go?

What happens to their political future?

Will they go to the BJP or the Congress?

These negative factors, the parties have not taken into consideration.

Will the law and order situation in UP have any effect on the BJP's prospects in the Lok Sabha election?

Law and order is always an issue with a big state like UP.

No government in UP can claim that everything is fine on the law and order front.

We have seen the Congress, Mayawati, the BJP and Akhilesh.

Mayawati, when she was in power, law and order was good.

It was said that since Dalits are marginalised people, she was very harsh in maintaining law and order.

But then, she had other negative things on her side.

What really matters though, be it Akhilesh or Mayawati, is they were not communicating with the people.

That was the problem.

They were (only) communicating with their constituency.

In a democracy you win on the support base of a particular segment of society.

I understand Mayawati and Akhilesh made a fundamental error as they were always speaking to their constituency and not to the public.

That is the mistake they did.

Is the current UP chief minister repeating the same mistake?

That I cannot say.

But if he is, then you can understand what will happen to him.

People of UP are very secular and whoever speaks the language of exclusion, they do not like it.

The last time we spoke, you told me that the non-Yadav OBCs were incorporated in the BJP very well. Does it hold true even now?

I am yet to start my field work.

As far as my subjective understanding is concerned, these non-Yadav OBCs have been greatly accommodated in the BJP bandwagon as far as ticket allocation was considered the last time, be it the Apna Dal or others.

At the moment there is nothing indicating that they are disillusioned with the BJP.

But, of course, I have not started my fieLd work so I cannot say firmly right now.

In 2014, the BJP and its allies won 73 out of 80 Lok Sabha seats in Uttar Pradesh. Do you think they can repeat that kind of performance?

It can be either way.

As I told you, there is a positive aspect and negative aspect to this (SP-BSP) alliance.

When we start our field work, we will see how this alliance is working on the ground.

If you see these two regional parties, the SP and the BSP, are constantly shifting their social engineering model.

Mayawati turned to Brahmins, then she could not keep Brahmins.

Then she shifted to Muslims, and she failed in that too.

Now she is shifting back to the 1995 model of the Kanshi Ram and Mulayam Singh alliance.

So this alliance with the SP is her third U-turn in social engineering.

In the same way, Akhilesh is fighting his uncle (Shivpal Yadav) and his constituency has split.

So we cannot say right now, as there is a positive and negative aspect to this alliance.

Why Modi deserves another chance