News
Business
Movies
Sports
Cricket
Get Ahead
Money Tips
Shopping
Sign in  |  Create a Rediffmail account
Rediff.com  » News » India must prepare for the daybreak of peace in Afghanistan

'The danger today is that out of sheer fatigue and exasperation, the US might cut loose and exit from Afghanistan leaving it to the region to cope with the debris, which it is ill-equipped to handle,' says Ambassador M K Bhadrakumar. 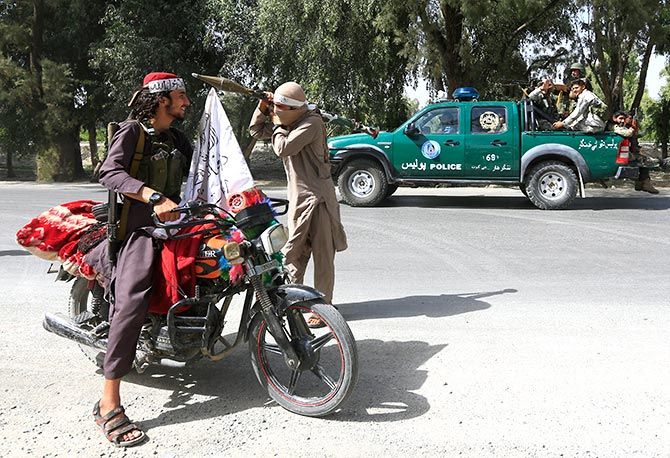 In the torrential flow of real time news from Pakistan about the July 25 parliamentary poll, we in India overlooked an event of historic proportions affecting regional security and stability -- the commencement of direct talks between the United States and the Taliban in Doha.

The Afghan government was bypassed in the Qatar talks. And the timing was exquisite: July 23, the eve of the Pakistani poll.

Of course, the Pakistani military and intelligence establishment made this path-breaking event possible. Evidently, Washington and Islamabad have been in close consultations behind the scene to open the pathway leading to a road that has never been taken before.

It is a painful decision for Washington since it is both an admission of defeat as well as a stark reminder for future historians that the US invasion of Afghanistan and the 16-year old war that followed, causing so much destruction and immense human suffering, was a horrible misadventure in imperial overreach.

To jog memory, the Taliban had offered in the immediate downstream of the 9/11 attacks on New York and Washington in 2001 that it was willing to extradite Osama bin Laden to a Muslim country to be tried under Islamic law, but the George W Bush administration for reasons of its own, brusquely spurned the offer and decided instead on the overthrow of the Taliban regime.

The wheel has come full circle and the US is now seeking the terms of engagement with the Taliban that would promote the latter's integration into mainstream Afghan politics in a near future, including a major role for it in Kabul and the Afghan State structures.

The Taliban has expressed satisfaction that the Qatar talks with the US ended with very positive signals and that the two sides agreed to resolve the Afghan conflict through dialogue and to meet again soon.

The Taliban further disclosed that the two sides discussed its participation in the Afghan government.

Except for Indian analysts, perhaps, the Qatar talks have not come as surprise. To any longtime observer, the surrealism of the disastrous war has been obvious for sometime.

Simply put, the US is fighting a war in search of a raison d'être.

A series of signals in recent weeks had hinted that Washington too had begun realising this and was veering round to engaging the Taliban directly.

Despite US claims that its strategy in Afghanistan was working, there is realisation that it wasn't getting anywhere really.

The New York Times recently reported that in a 'strategy retreat', the focus of the war has narrowed down to holding Kabul and other population centres, while leaving the Taliban in control of vast swathes of territory in rural hinterlands, where, according to CIA estimates, three-quarters of Afghanistan's population lives.

This shift in strategy has been interpreted as 'a rational approach to secure the cities, and provide the Afghan government the political opportunity to work with the Taliban.'

Interestingly, when US Secretary of State Mike Pompeo paid an unannounced visit to Kabul on July 9, he all but ignored the US military operations and confined himself to stressing the need of a political outcome.

Afghan President Ashraf Ghani who stood beside him at the joint press conference in Kabul promptly took the cue.

At one point, Pompeo let it be known publicly that the US was open to discussing with the Taliban the crucial question of the American military presence in Afghanistan.

To be sure, war weariness has set in.

It is not difficult to comprehend why the US is steadily losing its grit to fight an open-ended war.

First and foremost, the assumption that intensifying military pressure on the Taliban will compel it to come to the negotiating table has proven dead wrong.

On the other hand, there is a colossal drain of resources. The US and the NATO maintain 16,000 troops in Afghanistan and the US spends a whopping $45 billion annually to keep the show going.

It has become a 'bleeding wound' -- to borrow the words from Mikhail Gorbachev's famous speech at the 27th congress of the Communist Party of the Soviet Union in February 1986 hinting at a decision to withdraw troops from Afghanistan 'in the nearest future'.

Only a clutch of Pentagon commanders would have their heart in the gravy train running in Afghanistan.

The watchdog charged with tracking US government spending in Afghanistan came out with its first report last week making a preliminary estimation after completing just 29% of the auditing that a staggering $15.5 billion has been wasted over 11 years alone -- but says even that figure is probably 'only a portion of the total waste, fraud and abuse of wasted efforts.'

One of the three US congressmen who requested the calculation, Walter Jones (Republican) called Afghanistan a 'black hole' for taxpayer money.

Jones said in a statement in Washington on July 26: 'It is time. Enough blood and money has been shed in Afghanistan, Tragically, $15.5 billion is only the verified amount of wasted money -- the number is much greater.'

'That is why we are requesting other agencies for an in-depth review of tax dollar usage within their jurisdiction. The American people deserve a better understanding of where their money is going -- to the black hole, known as Afghanistan.'

Indeed, Pompeo's sudden visit to Kabul last month led to reports citing unnamed US officials that President Trump may be inclined to order another assessment soon as to how his strategy which was announced in August 2017 (allowing a troop surge in Afghanistan and providing for no timeline for the Pentagon's military operations) has worked though the past one-year period.

In a masterly essay in Foreign Affairs magazine last week, the noted American author and expert on Afghanistan Barnett Rubin wrote: 'Now there may be no timeline (for military operations), but a spectre is haunting the mission: that of the president's Twitter. The result is an unprecedented interest in a political settlement.'

Thanks to media censoring, very little is getting reported from the killing fields of Afghanistan regarding the brutal operations that the US military is conducting in the name of 'counterterrorism'. Rubin mentioned that the excesses -- search of Afghan houses, special forces raids, misaimed bombing, etc -- have 'caused hatred among the people'. 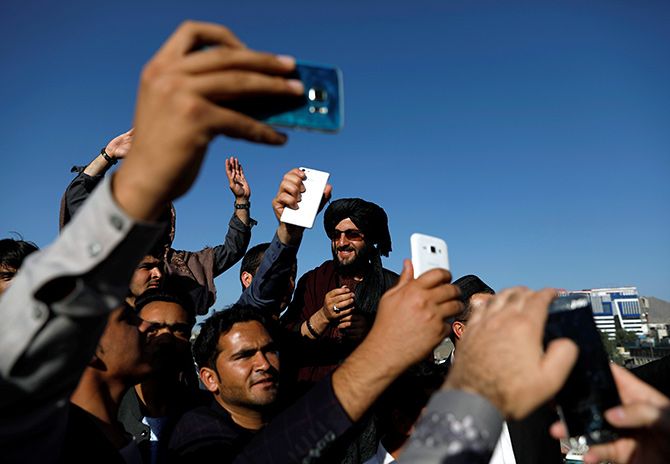 Meanwhile, the ethnic divides are widening alarmingly -- non-Pashtun grievance over dispossession by the centralised Pashun-dominated State, as Rubin puts it diplomatically.

The ethnic tensions surged recently as widespread demonstration across the largely non-Pashtun regions of northern Afghanistan against President Ghani.

Ghani quickly swallowed pride and dispatched a trusted aide to Ankara to beseech Rashid Dostum, the strongman of the Amu Darya and Afghanistan's principal Uzbek leader (whom Ghani had pushed into exile), to return post-haste to Kabul to pacify the northern region.

Dostum was given a formal welcome upon arrival on July 22 in the Afghan capital. It was an act of abject surrender by Ghani to political reality, which carried a big message in the Afghan bazaar.

On the other hand, it becomes a formidable challenge to hold the parliamentary and local bodies elections in October and the presidential election next April in the prevailing security situation without the acquiescence of the Taliban and cooperation by Pakistan.

In recent months, in a curious reversal of roles, Ghani -- who had disdainfully broken off discourses with Pakistan and pilloried Pakistan for its duplicity in speeches after speeches (much to New Delhi's delight) -- has become the supplicant, pleading with Islamabad to help kickstart and 'Afghan-led, Afghan-controlled' peace process.

The killing of the notorious terrorist Mullah Fazlullah in a drone strike in eastern Afghanistan was intended to placate Pakistan.

But sensing that the ground beneath the feet has begun shifting against the Ghani government and its American mentors, and that time is working in Pakistan's favour, Islamabad has chosen to sit tight refusing to reciprocate by even detaining the Taliban leaders residing in its territory.

No wonder, the Pakistani military and intelligence establishment senses that it is a matter of time before Washington will have to sue for peace and the Taliban gets accommodated in the Afghan power structure.

Pakistan factors in that with an eye on his presidential campaign in the 2020 election, Donald J Trump will also be in some hurry.

But from the US perspective, an added factor is the real danger that the Afghan war may be turning into a proxy war.

The alienation of the non-Pashtun tribes in northern Afghanistan traditionally provided a base for Russia and Iran to interfere in Afghanistan.

But a fragmentation of Afghanistan is not in Pakistan's interest.

On the contrary, Pakistan appreciates that the US is willing to recognise the Pashtun grievance over dispossession -- ever since the Soviet invasion of Afghanistan in December 1979. This makes Washington the most meaningful interlocutor for Islamabad (apart from other factors, of course.)

The point is, Pashtun irredentist claims is the spectre that haunts Pakistan, especially in a post-settlement era in Afghanistan. (The importance of Imran Khan to the Pakistani military establishment must be seen in this light.)

To be sure, much intra-Afghan, regional and international bargain lies ahead.

But the good thing is that Washington may be inching close to accepting that a US-dominated future for Kabul is unrealistic due to the geopolitical factors that have appeared lately.

The New Cold War conditions involving Russia; the US's tense relations with China; the run-up to US-Iranian (re)engagement; China's Belt and Road strategy; the shake-up of the transatlantic alliance -- these factors would undoubtedly cast their shadows.

But there are helpful factors, too.

China, India and Iran are on the same page as Pakistan and the US in their desire for stability in Afghanistan.

China, in particular, has positioned itself to redraw the strategic map and the recent rapprochement between China and India and their plan to link BRI to Chabahar also makes New Delhi a stakeholder in the stability of Afghanistan.

Paradoxically, the danger today is that out of sheer fatigue and exasperation, the US might cut loose and exit from Afghanistan leaving it to the region to cope with the debris, which it is ill-equipped to handle.

It is entirely conceivable that in the direct talks with the Taliban, the US may be willing to negotiate its continued military presence in Afghanistan.

Even an American withdrawal similar to the Soviet withdrawal following the Geneva Accords of 1988 is within the realms of possibility.

Protracted negotiations lie ahead also to flesh out the Taliban's integration, especially into the State security organs.

At some point, it will also become imperative to involve the Taliban and the non-Pashtun groups in an intra-Afghan dialogue.

Similarly, the UN will have to be brought in to supervise the transition.

Rubin has proposed, 'The Organisation of Islamic Cooperation may provide symbolism, but the Shanghai Cooperation Organisation is more likely to provide the UN with a lasting political partner for stabilisation'.

Indeed, the sine qua non will be that the US does not seek permanent bases on Afghan soil. 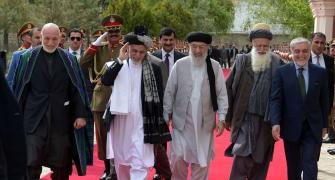 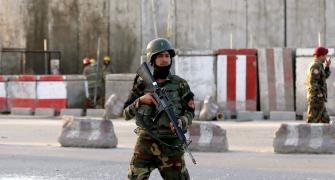