News
Business
Movies
Sports
Cricket
Get Ahead
Money Tips
Shopping
Sign in  |  Create a Rediffmail account
Rediff.com  » News » 'Whatever Hathras DM did against the wishes of the family is against the rule of law'

'He may have had his reservations about the law and order situation there, but the way the family of the victim was intimidated raises a lot of questions about the intentions of the DM.' 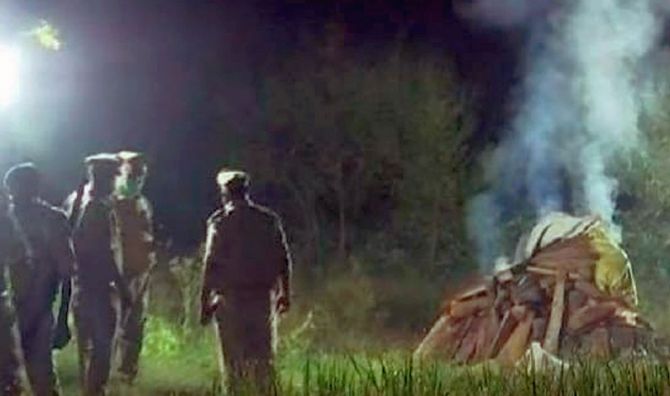 Uttar Pradesh Chief Minister Ajay Singh Bisht's government is under pressure to suspend or transfer Hathras District Magistrate (Praveen Kumar Laxkar, who was caught on video allegedly intimidating the family of the rape victim to echo the district administration's version of events that led to the cremation of the girl at the dead of night.

The UP government has suspended Superintendent of Police Vikrant Vir and his deputy Ram Shabd in the face of national ire.

But a former IAS officer tells Prasanna D Zore/Rediff.com that the DM and SP should be solely held accountable in such cases.

"They will then understand that they are on their own. Even if directions come from the CM's office they will know that the buck is going to stop at their doorstep and they will be held responsible and accountable to the situation that unfolds because of their actions," says this former IAS officer, who spoke on condition that his identity would not be revealed in this interview.

The first of a two-part conversation:

As a former IAS officer, what lapses are visible in the conduct of Hathras District Magistrate Praveen Kumar Laxkar when he went to meet the victim's family at their home?

Three particular things to begin with.

It is possible that he (Hathras DM Praveen Kumar Laxkar) could have apprehended that the family was against an immediate cremation (and call for a protest before the body was cremated).

The other issue is you don't normally cremate a body in the night; more so, of a rape victim who was brutally assaulted and later succumbed to her injuries.

What was the hurry in bringing the body back immediately after the post-mortem? Why couldn't it have been brought the next day during the daylight?

This is a huge, huge, lapse.

Secondly, if you apprehend some sort of law and order situation, you could have put preventive orders in place instead of trying to bully the family to cremate the body or burn it at night.

Instead of bullying the family, you should have prevented the law and order situation (from taking an ugly turn if that was your apprehension); not prevent the right of the family to give a decent cremation, or perform their child's last rites, who is already, very clearly, been a victim of gender and caste violence.

But it does not have any right to prevent access or curtail the freedom of movement of this family, or prevent the access of the media or anybody else to them, because the media would have only asked for their side of the story.

And it is their right to speak with the media or anybody else they want to without any fear of intimidation or repercussions.

You can counter it (the family's claims), you could have called up a press conference and the administration could have countered it.

But instead, what you do is confine the family in a room, try to seal their village, and suppress the voice of an aggrieved family who has lost their daughter to rape and murder.

It is not anybody's case that the administration can prevent all crimes at all places. That is not the case. But the steps that happened after her death in no way can be justified.

Whatever happened in Hathras is completely incorrect.

The post-mortem could have been done in the morning.

The body should not have been cremated in the dead of the night.

You don't outrage people by cremating a body in the absence of family members.

Even more worrying was the fact when people are saying (justifying the Hathras DM's conduct) that he just went to give advice to the family. But if you are the same person against whom they have complained then you are not advising them.

Could it have been handled differently?

The sequence of events could have gone differently.

Assuming that whatever the DM is saying is correct; that the family is lying, that the family had plans to call a rally if the dead body was given to them for cremation, still you don't have the right to cremate the body in the night without allowing the family members to conduct the final rites.

Why do you think the Hathras DM allegedly intimidated the family? What made him think he will have impunity against such acts?

Whatever happened in Hathras amply exemplifies the direction the country is moving towards; where this (the Narendra Damodardas Modi or the Ajay Singh Bisht) government wants to take it.

It is not about Muslims, Dalits, or anybody else. It's about power. It's about absolute power.

We are in power; we will come, we will fold our hands before the elections; we will listen to you, but you don't have the right to reject what we do once we are in power. That is the trend that we as a country are following right now.

You know what is good for you and you want to do that, but you don't have a choice. And that is what will happen to every citizen.

That won't remain restricted to just one particular community or caste. They want people who will not dissent against them; obey their orders blindly without any protests.

What influence would this incident have on other young IAS and IPS officers across India and Uttar Pradesh? Wouldn't this lead to complete paralysis of law and order in states?
Every DM or SP would now be paralysed fearing the consequences of her/his actions whether under pressure or otherwise?

I completely agree with you on this. Precisely, that is the reason why every person who is in the position of responsibility and authority should strictly act as per the law; strictly follow the rule of law and the Constitution.

There cannot be two sides to what was done by the Hathras DM. He may have had his reservations about the law and order situation there, but the way the family of the victim was intimidated raises a lot of questions about the intentions of the DM.

Whatever was done against the wishes of the family is against the rule of law. There cannot be two sides to it. There is no other side here, so please don't try to justify what happened in the victim's house.