News
Business
Movies
Sports
Cricket
Get Ahead
Money Tips
Shopping
Sign in  |  Create a Rediffmail account
Rediff.com  » News » 'Unless Modi generates jobs there will be a backlash'

'At the end of the day, Modi needs to deliver.'
'Modi may have found a winning formula, but its lasting success is contingent on performance.' "There are real concerns within the BJP, within the RSS, and in Modi's own mind about pushing for sweeping reforms," Milan Vaishnav Senior Fellow, Carnegie Endowment for Peace in Washington, DC, tells Rediff.com's Archana Masih in an e-mail interview.

"I think the focus for the first term is consolidating and expanding the political base and whipping the Opposition," adds Vaishnav, author of When Crime Pays: Money and Muscle in Indian Politics.
Illustration: Uttam Ghosh/Rediff.com

What were your five major takeaways from this election?

The first major takeaway is that Narendra Modi is the most popular politician in India and, for the moment, he is peerless.

No leader since Indira Gandhi has saturated the political space as thoroughly as he has.

The second is that Opposition parties are struggling to keep pace; when they come together, as they did in Bihar, they have been able to contain the BJP.

But when they lack a unified front, they struggle to stop the BJP juggernaut.

Third, the Congress, despite its win in Punjab, continues its gradual deterioration.

It still has not solved its leadership or ideological dilemmas that were laid bare in 2014.

Fourth, with its disappointing performance in Goa and Punjab, the Aam Aadmi Party has demonstrated the limits of its pan-Indian appeal.

Finally, the BJP is in the pole position as far as 2019 is concerned.

The electoral map is heavily tilted in its favour at present.

Nearly 61% of India is now ruled by the BJP. What accounts for Modi's pan-Indian appeal?

The BJP's UP campaign combined caste politics, majoritarian sentiment, talk of vikas, and charismatic leadership all into one.

But let's not forget that, at the end of the day, Modi needs to deliver.

He may have found a winning formula, but its lasting success is contingent on performance.

For instance, unless he can generate jobs -- and at a rapid clip -- there will be a backlash sooner or later.

The BJP weaned away non-Jatav Dalits and non-Yadav OBCs from the BSP and SP. Is the BJP becoming more attractive to the core voters of the SP and BSP?

One of the biggest puzzles surrounding demonetisation is why Modi would have taken a decision that could potentially roil the BJP's traditional trader/bania base.

One answer to that is that the BJP, even before Modi, began a process of expanding its appeal.

Tariq Thachil's recent book on this subject is instructive; in states where there is an opportunity for the Sangh Parivar to take hold through its service delivery arms, the BJP has been successful in winning Dalit and Adivasi support, for instance.

Modi does have designs on a further expansion in this direction and Hindutva appeals also help in this consolidation.

In UP, its strategy was quite clear: Focus on the non-Yadav OBCs and non-Jatav Dalits, groups that have felt left out by the SP and BSP respectively.

The BJP did not field a single Muslim in UP and does not have any Muslim MP -- where do you think the Muslim features in the BJP's political-cultural construct?

This is a disconcerting aspect of the BJP's success.

It is true that the so-called 'secular' parties have often cynically manipulated religious identity for political purposes and there's no question the BJP is doing this in the opposite direction.

If you want 'sabka saath, sabka vikas' to be more than a catchy slogan, you have got to demonstrate that with your actions.

With this enormous mandate, what are the next big changes that one can expect from the PM in politics and governance?

The government is focused first on implementing the Goods and Services Tax. That is their major economic priority.

Another immediate priority is to deal with the issue of the hamstrung banking sector and debt-laden infrastructure companies (what is called the 'twin balance sheet' problem); the chief economic adviser has brought out the importance of this issue in pretty stark terms in his latest Economic Survey.

We do not yet know how they will tackle this issue.

As far as market reforms are concerned, I do not anticipate that we will see a big shift in the government's approach here.

At the end of the day, there are real concerns within the BJP, within the RSS, and in Modi's own mind about pushing for sweeping reforms.

I think the focus for the first term is consolidating and expanding the political base and whipping the Opposition.

The government has laid out some big flagship schemes -- Jan Dhan Yojana, DBT (Direct Benefit Transfer), Swacch Bharat, Make in India -- but now they need to focus on making sure that these schemes live up to their promise.

There's no question that the Opposition is on the back foot.

At an all-Indian level, there is no effective counterweight to the BJP, given the Congress' gradual decline.

The AAP, which saw itself playing this role, is clearly not yet there.

In the short run, I think you will see opportunistic coalitions of convenience (as we did in Bihar) that will join hands to blunt the BJP.

The real question is what will happen in two-party states like Madhya Pradesh and Rajasthan where the Congress really is the only Opposition.

Where there is anti-incumbency, the Congress should be the natural place disenchanted voters will turn.

But this is only if the Congress can take advantage of this opportunity.

A purely negative, anti-Modi, anti-BJP campaign will not be enough. You have to offer something affirmative as well.

Rahul Gandhi is yet to take stock of his defeat. How can the Congress ensure its survival?

Rahul Gandhi was nowhere to be found since Counting Day.

In the meantime, the BJP has staked a claim to forming the government in both Manipur and Goa, despite the Congress winning more seats in both places.

The BJP, in a fundamental respect, has become the default governing party -- in the same way the Congress used to be.

Despite having fewer seats, they were able to cobble together a post-poll alliance in 24 hours after the results were announced.

What lessons does this have for other regional parties?
Are they helpless in the face of Modi's onslaught?

No, they are not helpless. But they are behind the curve. They need to move from being reflexively anti-Modi to articulating a forward-looking vision for the country.

They do have a coordination problem when it comes to speaking with one voice, but enlightened political leadership can overcome this.

But there is definitely a collective action problem, especially in the Hindi belt, where the rivalry between key leaders cannot be minimised.

Just look at the rivalry within the SP itself!

How does this victory reinforce Modi's image internationally?

Internationally, Modi's image was already quite strong in terms of his political control. These results only serve to reinforce that impression.

The hope, especially among the investor community, is that the PM will use these newfound political gains to further push on the economic reform agenda.

Right now, that is a 'hope'. There are some like Ruchir Sharma who argue quite convincingly that Modi will double down on populism as this has not hurt him electorally.​ 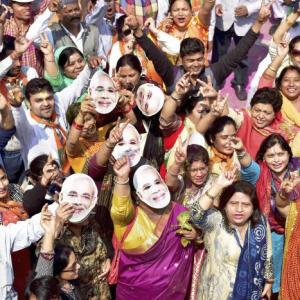