News
Business
Movies
Sports
Cricket
Get Ahead
Money Tips
Shopping
Sign in  |  Create a Rediffmail account
Rediff.com  » News » 'This govt has taken flesh and blood out of CBI' 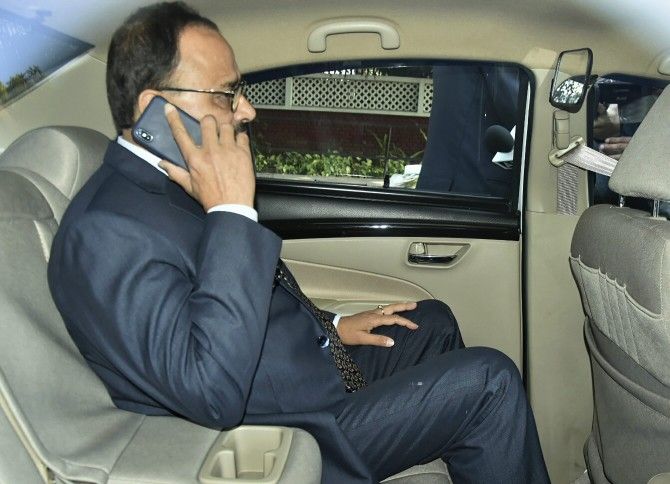 IMAGE: Central Bureau of Investigation Director Alok Verma on the way to the CBI headquarters in New Delhi, January 9, 2019, after the Supreme Court reinstated him and set aside the Centre's decision divesting him of his powers and sending him on leave. Photograph: PTI Photo

In a midnight operation on October 23, 2018, when the central government removed CBI Director Alok Verma, K Ragothaman, former chief investigating officer with the Bureau, had told Rediff.com that the CBI had become the Controlled Bureau of Investigation under the Narendra Damodardas Modi government.

"My biggest worry is that they have made the CBI a puppet of the government," Ragothaman, below, tells Rediff.com's Shobha Warrier.

The Supreme Court has reinstated Alok Verma as the CBI director, overturning the Centre's decision asking him to go on leave and appointing an interim chief. Is it a major setback for the Modi government?

He should have stepped in and solved the issue before it turned ugly. Instead, he decided on a midnight operation to divest the power of the CBI director.

Everything was done very hurriedly, which was totally against the principles of natural justice and the law of the land.

With its verdict, the Supreme Court has restored order by giving the status of director to Alok Verma.

But the Supreme Court also restrained Verma from taking any major policy decisions till the CVC inquiry concluded.

The court has looked into the allegations against him and left it to a competent authority to decide whether he has to continue or not. So, the order doesn't make any difference to the situation.

But as far as Alok Verma is concerned, he won the case.

He had only challenged the government's decision to take away powers from him overnight and he has got relief from the court.

Now that he has won the case, in the interest of the CBI and in his own interest, he should go to the CBI office, take charge as CBI director, put in his papers and go back. Anyway, he has only got a few more days before his tenure ends.

What is he supposed to do in office when he has been restrained from taking any major decisions?

The lawmaker has the power to send him out and now the law protector says that what the lawmaker did was illegal and wrong, and his doing is right.

I do not understand the word 'major decision'.

What is the major decision as far as the CBI is concerned? It is registering a criminal case.

A police station cannot be restrained from registering and investigating criminal cases as that is its job.

Law enforcement agencies cannot be constrained with these kind of orders.

The order by the Supreme Court doesn't make any sense at all.

Does this mean he will just sit there till the CVC takes a decision?

The CBI was described as a caged parrot till now, but the present government has made the CBI a puppet. They want the CBI to act according to their whims and fancies.

That was why they brought back Rakesh Asthana despite the objection by the CBI director.

Once they brought their own man inside, they should have asked the director to get out as they have the power to do so.

They did not do that, but allowed the situation to get messy.

Ultimately, Alok Verma had to fight against the government.

The court also said that any further decision against Alok Verma would be taken by the committee that selects and appoints the director. Does that mean the government has no authority to take any action against the CBI director?

No. That is why there is this clause that if the CBI director does any wrong, he should not be allowed to go scot-free. The court has allowed the clause to continue.

If that was the court's intention, it would have given a judgment in favour of the government.

The midnight operation irritated the court and that has made the judgment in Verma's favour.

You must understand that the allegation against Alok Verma is not from any individual or government agency, but by an accused. Is this not absurd?

You cannot act upon an accused versus accused statement. If somebody else has raised a complaint against the director, I would have given merit to it, but here, the complaint is from an accused. Earlier, there were differences of opinion between the director and the special director. There were so many such instances. But this is for the first time that an incident of this sort has come into the public domain.

My opinion is that the government should not have allowed this to happen. The prime minister's office has allowed the matter to reach such proportions and now they say they have protected organisational, institutional democracy. No, they did not.

You said this government has made the CBI a puppet...

Yes, I want to say that this government has not only damaged the institution of the CBI, but it has taken the power out of the CBI by amending the DSP Act as well as the Prevention of Corruption Act. This is against the judgment of the Supreme Court.

As per the amendment of the 2018 Act, this has been taken away. It means there is no criminal misconduct.

Next, any crime investigation has to be supervised by the court or by the judicial authority and not by the Central Vigilance Commission which is an administrative vigilance department.

But once corruption takes place, it is for the investigative agency to investigate and it cannot be supervised by the CVC.

They brought the CVC Act and amended the DSP Act so that the supervision of corruption is done by the CVC.

This is against the principles of the law of the land.

By doing so, they have taken away the flesh and blood of the CBI and left it as a skeleton now.

Forget (Rakesh) Asthana. Forget Alok Verma. It is this government that has done the greatest damage by amending the DSP Act.

By amending the law, they did it openly. Instead of the Prevention of Corruption Act, they have brought in a pro-corruption act. This is not good for the country.

So, you feel what happened was criminal misconduct.

Yes. When someone is violating certain rules, he is committing misconduct. The section 'criminal misconduct' is all the more relevant today.

How will the CBI get its credibility back?

Now that this government has taken the flesh and blood of the CBI, only a skeleton remains and it will also crumble in due course.

There is no more any CBI or any investigative agency.