'If ever there was a decisive moment in the history of the Supreme Court where it has been under attack by the Executive, and the judges have boldly stood up for independence of the Judiciary, that time was now.'
'These four judges did a brilliant thing, they set an example.'
'They showed that they were fulfilling their duty to the Constitution and to God.'
'Don't allow fear to dictate your actions was their message.' 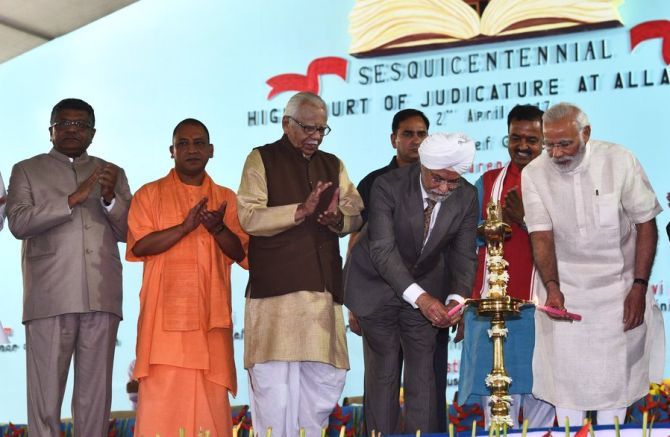 Supreme Court advocate Colin Gonsalves came out in support of the four Supreme Court judges the day they addressed a press conference on January 12.

Jyoti Punwani spoke to Gonsalves on whether he continues to support the judges after their action drew criticism from some legal luminaries.

Do you still support the four judges speaking out?

My immediate reaction then and today is the same: I applaud without any reservations their action.

If ever there was a decisive moment in the history of the Supreme Court where it has been under attack by the Executive, and the judges have boldly stood up for independence of the Judiciary, that time was now.

There have been many comments about how the judges have undermined the institution of the Supreme Court, how this could have been sorted out internally, but I think these have missed the point.

You need to go back in time to understand the eruption that took place on January 12. This Executive has increased interference and attacks on the Judiciary 10 times more than what the Manmohan Singh government was doing.

Interference was there under the Congress too. But no government has seen the Judiciary as an enemy of its so-called development plans for the nation. This government does.

The Congress government also saw the Judiciary as an enemy, but that was because the Supreme Court was examining so many corruption cases against it, so the Congress went on the defensive.

This government is not on the defensive. It is very aggressively out to demolish the independence of the Judiciary.

On what basis are you saying this? The government's attempt to push through the NJAC (National Judicial Appointments Commission)?

The signs of this aggression were noticed when certain judges complained in private that their phones were being monitored.

On the 50th anniversary of the Delhi high court (October 2016), Chief Minister Arvind Kejriwal in the presence of the Chief Justice of India and senior judges, as well as the President and the PM, said 'the phones of judges were being tapped'.

The second sign of this aggression is that the Intelligence Bureau is being used to dig up as much dirt as it can to knock down liberal, progressive lawyers and judges with the idea that middle of the road judges or those with a saffron bent should be appointed.

Lively, socially conscious judges can be found unsuitable by the IB, which has its own creative interpretations.

On what basis do you say this?

Partly on the basis of lawyers' perceptions in the corridors of the Supreme Court.

In fact, news reports have appeared that say that the Collegium has been disinclined to go by IB reports of potential appointees. The time has come to X-ray these reports.

The Intelligence arm of the State should not be used to terrorise the Judiciary.

The NJAC judgment also talks about this government's attitude to the Supreme Court. A sentence in Justice Madan Lokur's decision said that the court was addressed in a very disrespectful manner by the government counsel. That was a telling observation.

In the '50s and '60s there was a certain decorum with which a law officer addressed the court. In the 17 years that I've practised in the Supreme Court, I've never seen judges being addressed in such a disrespectful manner as I saw during the NJAC arguments.

In fact, a lot has changed in the last 10 years. Post-Independence, Supreme Court judges would be loath to have a discussion with politicians on the subject matter of a case pending before the court. Ministers too would be very hesitant to influence judges.

But over the last 10 years, the perception of lawyers is that there is a lot of hobnobbing going on between presiding judges -- I'm not talking about the Supreme Court, but generally about the Judiciary -- and politicians.

I have a feeling that the present crisis is related to the central government trying to ensure that certain cases are handled in a particular manner.

The Justice B H Loya case alone, or also the Aadhar matter?

But there is a concerted attempt by the central government to determine how a court handles politically sensitive cases, so that the high and mighty escape judicial scrutiny.

The persons who facilitate this connection between politicians and judges are law officers in different states, who know both parties.

You say the last 10 years. You mean this was there even before this government took over?

This was true of the Congress too. But it is more pronounced in the present day.

This is the most dangerous development, aimed at undermining the independence of the Judiciary. The present crisis has arisen because of that.

Yet, the government, which is the culprit in this, says this is an 'intra-judicial fight'. Nothing could be further from the truth.

Given this backdrop, what the four judges are saying is: There must be no Executive interference and no judge should encourage even the slightest interference.

Maybe lawyers got this message. But that's not how the lay person understood the press conference and the judges' letter.
All they understood was that senior judges were not being given politically sensitive cases.

Yes, the layperson was confused. Because talking about the Judiciary is difficult. One can't be frank. It's a situation where one has to speak in a particular manner to convey the truth to those who can understand it.

It's not an issue about junior and senior judges at all. Important cases may be assigned to junior judges.

However, if the Chief Justice is not assigning politically important cases to senior judges, if he is not following the established tradition, then there should be a transparent and fair reason for this.

In the absence of transparency, suspicion grows that politically sensitive matters are being managed.

There are 12 courts. Your Collegium judges must understand why certain cases are being assigned to Court XY. The lack of transparency is the issue.

What's the solution now? What if things just go on as before?

One never knows what the future holds.

We do know that a very bold and decisive first step has been taken to shatter the very evil intention by the Executive to undermine the Judiciary.

A brilliant example has been set for all judges to be fearless.

Whether a second or third step will follow, we don't know.

Many judges in high courts have developed a sort of fear of delivering judgments against the central government. They are very deeply apprehensive that they may be transferred or their chances of becoming chief justice or of going to the Supreme Court may be stopped.

This is a real fear which was not there under the Congress.

There's no doubt that this government doesn't want fearless and independent judges.

Which government does? Did the Congress want such judges?

The difference is that this government is perceived as very vindictive.

That is why these four judges did a brilliant thing, they set an example.

They showed that they were fulfilling their duty to the Constitution and to God. Don't allow fear to dictate your actions was their message.

But they let themselves open to so much criticism. Motives are being ascribed to them on social media.

How could they have avoided that? By keeping silent? Motives are always ascribed.

What motive could they have had?

Three of them are due for retirement. One is slated to be the next Chief Justice of India. If he had any motive, it should have been to keep quiet.

To do such an extraordinary thing must have taken sterling courage.

Will this make it easier for the government to push the NJAC?

This government is not going to back off.

But I don't think this press conference has undermined the Collegium.

Had they remained silent, it would have meant the Collegium has become a passive, insipid body which just goes along with whatever is happening.

Speaking out shows the vibrancy, strength and value of the five-judge Collegium.

In the absence of an alternative system, the Collegium system is alive and kicking.