News
Business
Movies
Sports
Cricket
Get Ahead
Money Tips
Shopping
Sign in  |  Create a Rediffmail account
Rediff.com  » News » 'A fight for justice that has been dragging on for too long'

'Now, it feels like the darkness has descended again.' 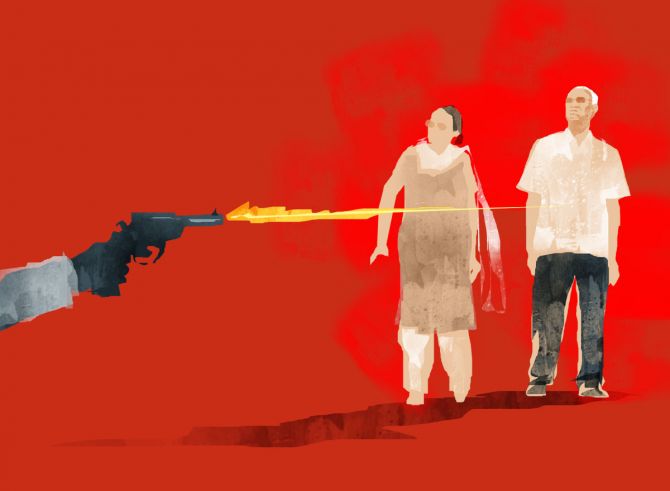 Megha Pansare and her two young sons rushed out of the house.

Lying in front of their shocked eyes that morning of February 16, 2015, were her bloodied in-laws -- Govind Pansare and his wife Uma -- who were returning from their daily morning walk.

Someone on a motorcycle had shot them five times at close range.

His death was a huge blow to Megha, who heads the department of foreign languages at Shivaji University, Kolhapur, and her sons; Megha lost her husband in 2003.

How has life changed for your family since your father-in-law, Govind Pansare, was murdered seven years ago?

You never stop feeling the absence of your dear ones.

Avinash was a lawyer -- he would only practise in the labour court -- and an active member of the CPI (Communist Party of India) and the AITUC (All India Trade Union Congress).

In principle, Avinash and his father were committed to fighting for the rights of workers; they never represented the management.

Avinash and I were both brought up in families that believe in Communism. We were close friends and worked for the AISF (All India Students Federation). My mother, who worked for the National Federation of Indian Women, was Comrade's rakhi sister.

After marriage, I made sure I balanced my personal and professional life. My career has always been important to me. I worked for the NFIW; Avinash's focus was the AITUC and the CPI.

His death came as a huge shock to both Comrade and me; my children were just four and six years old.

At that time Comrade was working at the state level because Avinash was handling the district level cases for the AITUC and the CPI. I did not have a permanent job; I used to work as a Russian translator and teacher.

I told Comrade I was educated and would not burden him with the responsibility of my children. I had no time to mourn; I drowned myself in my work. It was a critical phase for all of us. I began taking on more translation and technical scientific work.

Comrade drowned himself in work too. He sent me a text, 'Avi je karu shakla asta, te me hatat ghetla ahe (I have taken on the work Avinash would have done).'

We tried to use our workload to overcome our grief.

We became more active in the Shramik Pratishthan, which enables those who believe in the Left ideology to get involved in cultural activities.

We were also deeply involved in the Progressive Writers Association; we interacted with writers, poets and thinkers from western Maharashtra. I used to take my children to these workshops too.

During the last six months, we used to go for our morning walks together. I would drive us to the park where we would individually complete our walks.

Then, Comrade would hold a meeting, allot work to those who came to meet him and review the tasks previously allotted. He knew how to delegate work and give responsibility.

This is how we started our day every morning.

After Avi died, we undertook a seven-day series of lectures, the Avi Pansare Vyakhyan Mala. These seven lectures were given by seven eminent people. It was really motivating to see 700-1,000 people, including students, in the audience. We were focused on increasing political awareness.

After Comrade's death, there is a huge vacuum again. He was a central figure and a person the common activist looked up to.

Comrade had started giving lectures on Shahu Maharaj; he wanted to complete a hundred lectures but had only given 84 until his murder.

Again, there is no time to mourn.

This is a fight for justice that has been dragging on for too long. We had to file a petition in the high court as there was no progress. So I began meeting the investigating agencies and attending the high court hearings.

Then, advocate Abhay Nevagi came to meet me. Though he usually fought for the management's side, he was Avi's friend and close to Comrade Pansare. He convinced me to let him represent our case. Likewise, he convinced the Dabholkar family (anti-superstition activist Narendra Dabholkar, like Govind Pansare, was murdered on August 20, 2013, when he was on his morning walk) as well.

He is fighting pro bono for all of us.

Thankfully, there are a few people whom we can still trust.

Imagine how slow the wheels of justice roll; it was only recently that we got permission from the high court to transfer our case from the special investigation team to the anti-terrorism squad.

It is tough; this huge void exists after Comrade's death. But this is a reality that I have to accept and deal with.

Have people changed towards you and your family since Comrade's murder?

Many people, who visited Comrade regularly when he was alive, became frightened because the police had started calling them and asking questions about Comrade. Their statements were taken. So they just stopped visiting us. Eventually, our circle became really small.

When you face difficult times, you realise who are really trustworthy and who stand by you.

Till Comrade was there, I never had to worry about the people who interacted with him. After his death, I suddenly had to become independent and fight to fill this vacuum I felt on a personal level.

It requires a special kind of strength to fill the void as there is nobody to turn to. There were people in our social life who were concerned, but I had to fight this alone. It was like my children and I were in some deep darkness, struggling to find stray rays of hope.

I was clear about one thing, I didn't want to cry in front of my children. I didn't want them to feel they had nobody to turn to now that Comrade wasn't there.

I am a single mother; at a deep level, it requires a lot of strength to fight back. I have learnt how not to be an emotionally dependent person.

Losing Avi was the lowest point of our lives. I felt there was nobody to turn to though our family and friends were there.

It was a real struggle. I didn't want to show any kind of weakness in front of my children. At the same time, I was lonely and felt I had nobody to turn to.

My children knew I was there for them. They also saw be continuing with my social work, going to court for women's cases and dealing with the police.

Now, it feels like the darkness has descended again.

Everything changes when people see there is no father figure in the house. As a woman, you have to maintain your dignity. You have to show that you are strong.

Some of Comrade's friends and senior comrades are still there to guide me; their family members have become my friends. They help me keep my peace and rationality. 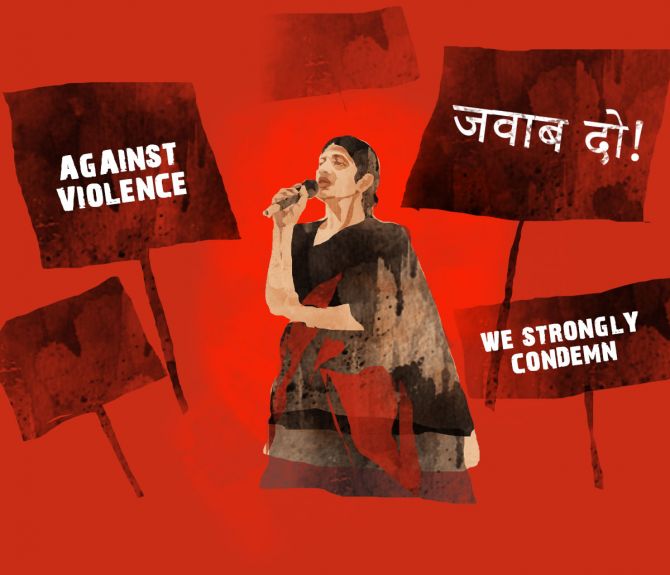 Your children experienced two terrible personal losses -- first their father and then their grandfather.

It is tough for my children. The entire incident happened in front of us.

The three of us were in the house when we heard people shouting after the shots.

Though we were in a state of shock, we took Comrade and his wife to the hospital in my car. The interiors of the car were bloody by the time we reached there.

My sons -- the events gave us no time to mourn together -- faced everything bravely.

The murder look place around the time my elder son had to appear for his Class 12 exams. My younger son had to give his Class 10 exams in a week. I told them to give the exams and not to worry about the marks.

They were watching me. They saw how I was battling at different levels so they felt confident that even if Comrade was not there, their mother was not giving up and would be there for them.

But the changed situation did depress them.

An independent woman having her own point of view -- and one who is rational and has no personal interest in her political work -- is not someone society can accept. This is a battle women face in politics.

It is a life lesson for the three of us.

We feel Comrade's loss immensely. He was busy so he could not devote as much time as he wanted to the boys. But we did travel together to conduct workshops in various towns in Maharashtra. We went to Sawantwadi (in Maharashtra, near the Goa border) to participate in the Annabhau Sathe Sahitya Sammelan organised under the initiative of Comrade Pansare. I wasn't keen since the boys had to give some exams.

However, Comrade insisted. We stayed at Avinash's friend's house for a week. I'm very glad that trip happened; we got to spend time together as a family.

We returned home towards the end of January; in February, he was killed.

Can you tell us a bit more about Comrade Pansare?

He was kind. He found it in himself to love everyone. He was extremely sensitive.

He had this knack of talking with people, asking them about their lives and helping them.

He was a fatherly figure for everybody who interacted with him.

Since he was a lawyer, he was sharp, intellectual and perceptive as well. When he assigned a task to anyone, he would also try to help them solve their personal problems.

Everybody felt he was a part of their lives. That made him unique; very few people had the kind of personality he did. 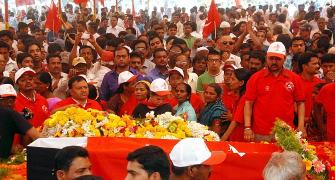 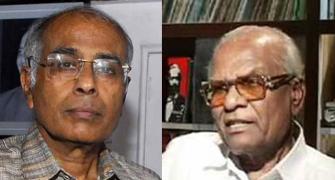 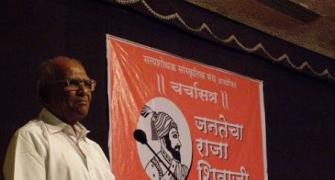 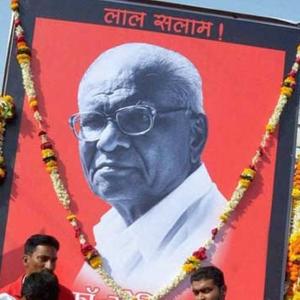 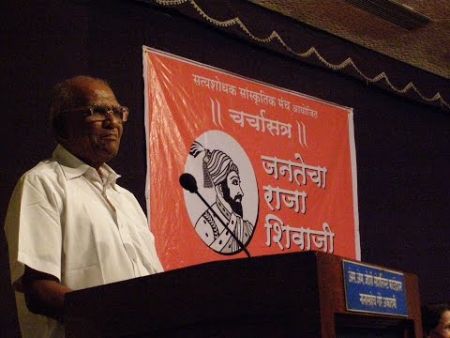