'If the mandis were not working in Delhi, or the onion market in Nashik got affected, or there were disruptions because of unloading or loading in any sector in south India, we intervened.' 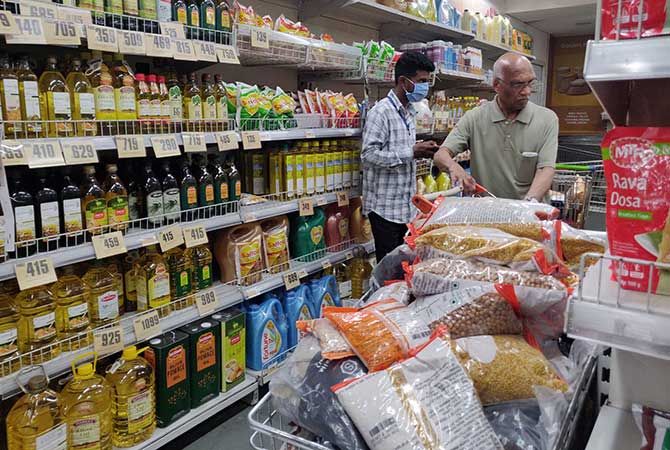 Parameswaran Iyer, secretary, department of drinking water and sanitation, currently also heads the COVID-19 task force on supply chain and logistic management which has helped keep up the flow of medicines and food all over India during the lockdown.

Secretary Iyer and 10 other members of the biggest task force, out of 11 such groups, keep a strict vigil on the supply chain.

The team includes Consumer Affairs Secretary Pawan Agarwal, Guruprasad Mohapatra, secretary of the department for promotion of industry and internal trade, Textiles Secretary Rajeev Kapoor, members of the Central Board of Indirect Taxes and Customs, senior officials from the prime minister's office, the ministries of external affairs and health and the department of health research.

Since the lockdown began on March 25 Secretary Iyer and his team have been meeting at 12.30 pm every day to take extraordinary decisions to ensure that medicines and food reached the nooks and corners of India.

In an exclusive Skype interview to Rediff.com Senior Contributor Sheela Bhatt, the man who enjoys Prime Minister Narendra Damodardas Modi's trust and keeps a low profile while working more and talking less, shares his experiences of the last 50 days. The first of a two-part interview: 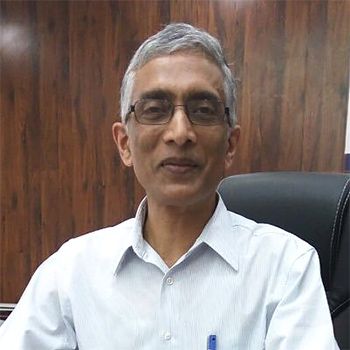 How did you ensure that the supply chain of medicines and food didn't break down despite the harsh lockdown?

The ministry of home affairs had set up empowered groups to deal with important topics that were directly relevant to the pandemic situation during the lockdown.

While it was critically important to have the lockdown, it had other consequences as well.

And so, while the respective ministries were considering the health and security aspects, there were certain additional areas which came into play because of the lockdown.

One of them was that, initially, there was some disruption in the supply chain and the logistics...

It was particularly vital to focus on food, medicines, hygiene products, etc.

So it became important for a dedicated, empowered, group to look at the situation and talk to the stakeholders, both public and private. IMAGE: Union ministers and officials meet at Defence Minister Rajnath Singh's home in New Delhi on May 17, 2020 to discuss maintaining the supply chain of essential commodities amid the coronavirus pandemic. Photograph: ANI Photo

In our committee, we have all the necessary people from the respective ministries -- transport, railways, food processing, food, shipping, civil aviation, etc.

Additionally, we can co-opt anyone we think will help us in our work.

We have met more than 50 times now.

Initially, we took stock of the situation and looked at what the policy and implementation bottlenecks were.

We held discussions with the resident commissioners, with the private sector, with all the stakeholders -- the transporters, manufacturers, wholesalers, retailers, e-commerce.

We also started reaching out to all the state governments because the action was in the states.

We then shared our recommendations with the relevant ministries to take the necessary action. 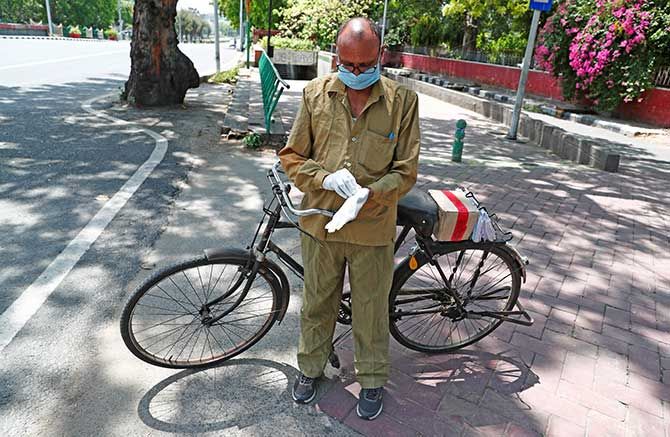 IMAGE: Roshanlal, a postal employee, goes about his job of delivering mails and parcels in New Delhi. Photograph: Adnan Abidi/Reuters

We also looked at specifically troubleshooting.

For example, if the mandis were not working in Delhi, or the onion market in Nashik got affected, or there were disruptions because of unloading or loading in any sector in south India, we intervened.

At the same time, we started putting out good practices so that people would know how even ordinary people are doing extraordinary things like a daakia (postman) delivering medicines...

Throughout the lockdown period we have been engaging very closely with the ministry of home affairs.

One of the earliest suggestions we made in our discussion with the home ministry -- and they readily agreed with us -- was permission for drivers to move.

Initially, passes issued by one state government were not accepted in other states, causing all kinds of issues.

We told them the driver's licence should function as a pass and one more person, like a cleaner, could accompany him.

The home ministry immediately clarified through advisories that a driver's licence was adequate for him to drive between states. 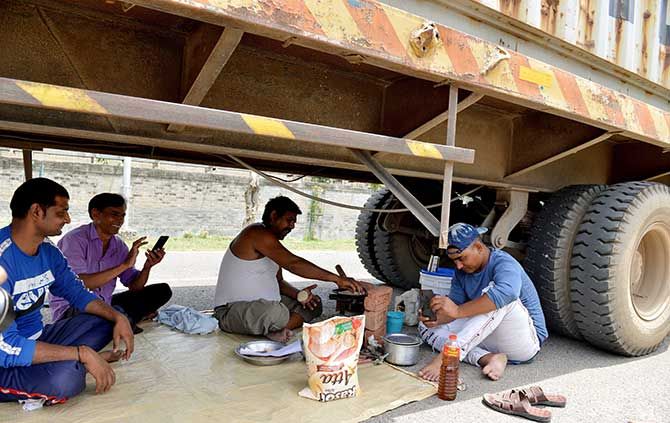 Again, after discussions with us, the home ministry agreed to not draw any distinction in the movement of trucks on an essential and non-essential basis as it is practically difficult to know this once the truck has starting moving towards its destination.

We suggested allowing the truck to reach its destination and unload its goods and any necessary checks could happen after that.

And ever after unloading, the driver would be allowed to drive back to the source destination with an empty truck so long as he had his driving licence.

Such matters were worked out with the home ministry, which was extremely accommodating towards our suggestions.

We could also give them substantive inputs because we were in touch with many state governments and they have many other issues on their plate. Another area that faced problems was agriculture.

For example, in Nashik, when one person was suddenly tested COVID positive, the mandi had to shut down for a few days.

As a result, the farmers could not send their produce there.

We worked with the government of Maharashtra and the local administration and made arrangements to ensure some of the produce could be transported via the railways.

They even started running parcel services, so it became a collaborative effort between multiple stakeholders. 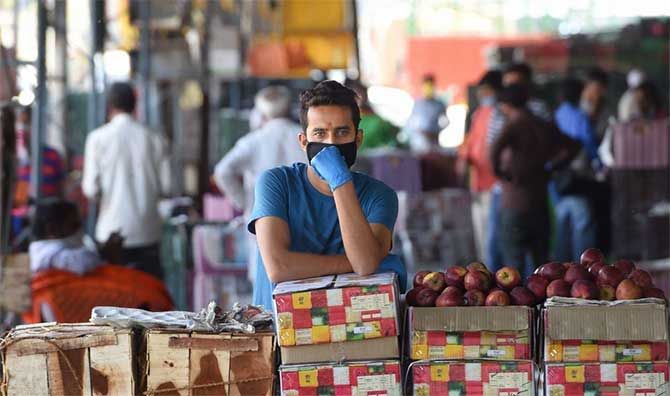 IMAGE: The Azadpur mandi in New Delhi, one of Asia's biggest markets, was kept functional during the lockdown. Photograph: PTI Photo

In Delhi, the Azadpur mandi gets a lot of produce from many states in India.

It is one of the largest fruit and vegetable markets in Asia and a major supply hub for all of north India.

In order for things to move, it was important for the Azadpur mandi to function and we worked with the Delhi administration to ensure it did.

All this was, of course, done taking all the necessary precautions and keeping safety and health factors in mind. 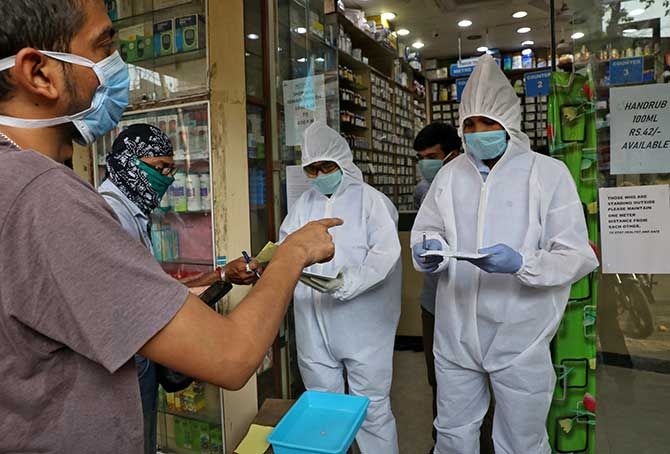 How did you manage social distancing in these operations?

We insisted on it.

Social distancing, protective equipment and other precautions have been non-negotiables.

All the respective state governments and stakeholders have been ensuring that the health guidelines are strictly adhered to at all times.

A lot of this activity is still going on.

Though now many of the issues have been resolved.

There has been a significant and consistent increase in supplies. 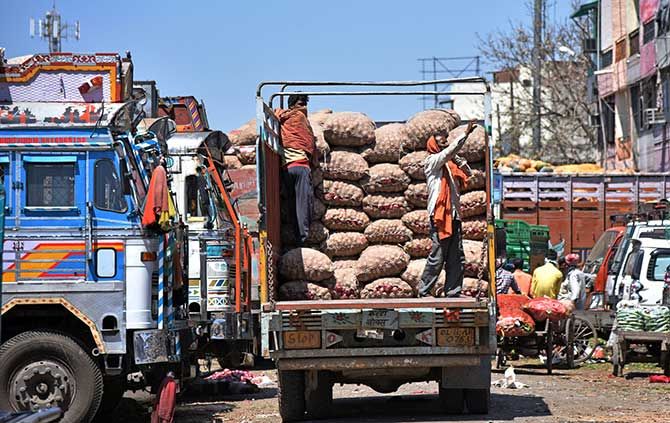 On March 30, the day our task force was constituted, there were only around 70,000 trucks on the roads when, pre-lockdown, that number was around 20 lakhs.

Today, there are almost 9 lakh trucks on the road.

And the trucks carrying essentials like food and medicines are almost at pre-lockdown levels.

There are no real bottlenecks at present, though there may be some isolated cases.

Besides, many of the truck drivers have gone back to their homes.

The lower levels of activities are understandable in the context of the lockdown, because the priority was to enforce the lockdown, slow the spread of infection, increase the capacity and the readiness to handle pandemic. 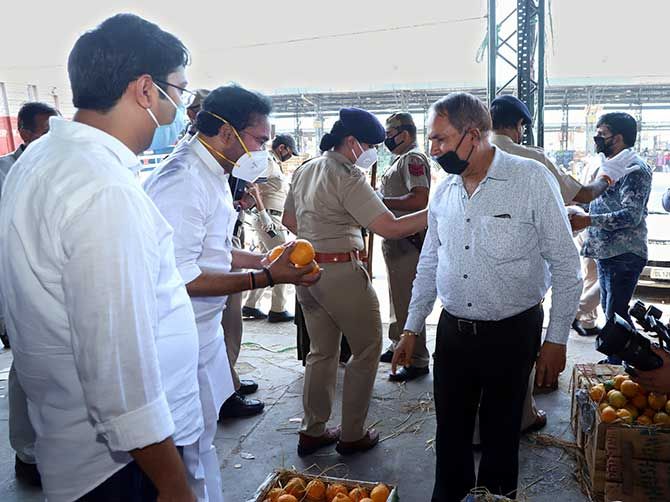 IMAGE: Minister of State for Home G Kishan Reddy (with fruits in his hands) visits the Azadpur mandi to assess the supply and safety measures being observed to check the spread of COVID-19, in New Delhi. Photograph: ANI Photo

We worked with the health ministry and the home ministry.

We would give regular updates to the PMO.

We continue to do so, which ensures our functioning is very collaborative.

We also interact with a lot of other empowered groups on a regular basis.

Now that the production side is fine and the supply chain is fine, we are concentrating on demand.

Unless you have markets functioning fully, things can't be normal. 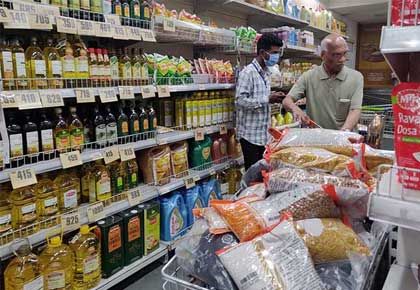