September 08, 2010 11:57 IST
C Umashankar, a 1990 batch Indian Administrative Service officer from Tamil Nadu, has been acclaimed for his honesty.

This did not always endear the 46-year-old bureaucrat to the powers that be. Fifteen years ago, he made the news when he pointed out the cremation shed scandal in Madurai.

In 2008 he was the managing director of the Electronics Corporation of Tamil Nadu when its subsidiary, ETL Infrastructure, worth Rs 700 crore (Rs 7 billion) went missing! For raising questions over this shocking episode, he was transferred before he could get to the bottom of that one.

A year later he was the MD of the government-owned Arasu Cable Corporation, which was in direct competition with the Sumangali CableVision, owned by the politically powerful Maran family, when he alleged that Arasu's cables were being cut by the latter.

He proposed the nationalisation of Sumangali, after which he was transferred out from his post.

But this time, more action was to follow. On July 21, 2010, he was suspended by the Tamil Nadu government -- for having submitted a false community certificate when he joined the IAS 20 years ago.

The civil servant, who was reinstated by the Tamil Nadu government in the first week of September, spoke at length to Rediff.com's A Ganesh Nadar in Chennai while still under suspension.

Both. The elite and the intellectuals including the Makkal Sakthi Katchi are supporting me as an honest officer. The poor Dalit people are supporting me because I am a Dalit. They are agitating spontaneously on my behalf.

What is the controversy over your caste certificate?

They say I am a Christian and that I have taken a caste certificate as a Dalit Hindu.

My father Chellakani Sadayandi was a Dalit Hindu and my mother Suganthi Santhabai Victoria was a Christian.

We are 12 children of whom 11 children are shown as Hindus. My mother admitted me to the Sarah Tucker School for primary education where the school authorities made the entry as Christian, judging from my mother's faith.

When my father became aware of this in 1984, before I graduated, he took me to a Hindu mutt and got me converted. He got it notified this through the government gazette. This is the laid down procedure in law. Then he got my community certificate.

We had two native villages, Mettupatti and Sathirakondan. Originally both came under Sankarankoil taluka but subsequently new talukas were created and that also brought about a change.

The government attempts to distort it by saying that I have taken a false nativity certificate. My father and I had three options before us for obtaining the community certificate: Palayamkottai where I studied; Sankarankoil (native 1); or Mettupatti (native 2).

My nativity cannot change my caste status. The question they have raised is on my caste and religion. Dalit Sadayandi Chellakani's son cannot be a forward caste. There are 10 million Dalit people in Tamil Nadu who belong to my subcaste (Devandra Vellalar). They are up against the government due to my suspension.

The message is very clear -- my community considers me a jewel in their crown.

What happened in the Arasu Cable-Sumangali matter that got you in so much trouble?

They were cutting the optic fibre cables of the Arasu Cable Corporation. My officials lodged complaints and FIRs (First Information Reports) with the police but they did not take any action.

Then I sent a series of reports to the government seeking high level intervention to protect government property, yet no action was taken.

On January 5, 2009, I went to Coimbatore to safeguard the government company's cables. We went on a night patrol along with the press people and our cable operators to highlight the problem.

Till then the police had not filed a single FIR. All the complaints which gave rise to cognisable offences were entered and kept in the community service register of the respective police stations. After I went there the Coimbatore commissioner of police registered five FIRs but not under the Destruction of Public Property Act.

No follow-up action was taken. The culprits were not arrested, nor did the cable cutting stop. Rather, it worsened, a week after my visit.

Arasu Cable people caught two criminals cutting the optic fibre cables red-handed and handed them over to the police. They let them go. The commissioner was helpless.

On January 7, 2009, I sent a proposal to the state government to nationalise Sumangali Cable Vision, terming it a rowdy company.

What happened as a result of your action?

On January 22, 2009, I informed the cable operators during a meeting at Vellore at which the press was also present that Sumangali Cable Vision would be nationalised. The next day I was transferred out at 11 am.

On the subsequent day Arasu Cable Corporation had run into losses as its optic fibre backbone cables were completely destroyed.

A mutual friend attempted to negotiate between Dayanidhi Maran (whose family owns Sumangali Cable Vision; he is now India's textiles minister) and me, offering something to me in return (in return for stopping his pro-active work). I refused.

This happened at Coimbatore airport, just before my departure after the cable inspection.

Was the story similar at ELCOT?

I was heading the implementation team to promote nine information technology special economic zones in Tamil Nadu. I was also the chief architect (technical) for four extremely important e-governance packages.

I was spearheading a campaign to promote free software in government which has the potential to save Rs 5,000 crores (Rs 50 billion) every year to India.

ETL Infrastructure Limited was a Rs 700 crore IT SEZ located in Chennai which was a subsidiary of ELCOT's joint venture company. It went missing from the records mysteriously.

No one knows how it went out of ELCOT's control or its joint venture company ELNET.

When I was physically searching for the records in the premises of the joint venture company on July 28, 2008, I heard the news that I was transferred out from ELCOT.

It was the biggest shock of my life. It took me three full months and continuous visits to church to recover from it.

I have given details of the people who caused my transfer in my complaint to the National Commission for Scheduled Castes.

When were you suspended and why?

The suspension order has been done in the most malafide manner. It is like a surgeon trying to do major surgery without even the body of the patient.

I was recruited by the UPSC through a common all India service competitive examination. Only the UPSC and the Government of India have my records. So, without any records and without any authority the Tamil Nadu government has resorted to my suspension. Strange indeed!

In 2003 you received an award from the National Democratic Alliance government. What was that for?

I was the collector of Thiruvarur between 1999 and 2001. I implemented the first e-district of the country. Based on that experience I wrote a technical paper on e-governance security. I was awarded for best paper during the national conference on e-governance in 2003.

There are reports that Chief Minister M Karunanidhi used to like you.

Yes! He liked me in the past. In 1999, at a public meeting, he called me thambi which means younger brother.

You have also filed a case against the state government in the high court.

In May, the government started a detailed enquiry against me on the complaint that I had accumulated assets disproportionate to my known sources of income.

I have always been prompt in declaring all my assets and new acquisitions, movable and immovable.

I have only two pieces of immovable assets -- a plot of land acquired through the IAS Association in the far outskirts of Chennai city during March 1998; the other a 1,000 square feet second hand flat at Santhome in Chennai during March 2003. There is no further acquisition.

For both these acquisitions I have taken prior permission from the government, indicating the sources such as housing loan, GPF (General Provident Fund), loan, bank loan etc.

My annual property returns for all these years indicate these details.

I came to know that the government was going to illegally raid my house to tarnish my image because I chose to send proposals to nationalise Sumangali Cable Vision. I moved the high court challenging the illegal Directorate of Vigilance and Anti-Corruption enquiry on June 6, 2010. The Madras high court stayed the vigilance probe.

The contention before the high court was that the state has powers to prosecute an IAS officer under the Prevention of Corruption Act by filing a proper FIR and not through the manual which enables secret enquiry, thus enabling the government to tarnish the reputation of honest officers who refuse to toe the line.

The argument advanced before the high court by my advocate was that the government should immediately arrest me and interrogate me if it feels that it has credible evidence on my alleged disproportionate assets. He also declared that no bail application would be filed in that event.

The state government was not ready to file an FIR against me nor it is ready to arrest me.

Subsequently, I filed another case before the Madras high court on July 16, 2010, challenging the DVAC (Directorate of Vigilance and Anti-Corruption) manual, calling it unconstitutional.

I declared in my affidavit before the high court that the manual was being used to shield the corrupt and to book innocent officers to force them to toe the illegal line of the bosses. I was suspended on July 21, 2010.

Subsequently the stay was vacated. The high court has said the vigilance enquiry can go on, but the government cannot take action on it without the court's permission. 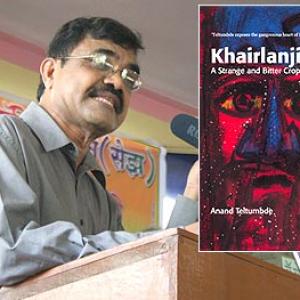 'Khairlanjis could be deterred by tit for tat'

Why Dalits are angry