'On one side you have the farmers of India and on the other side are few corporate families.'
'Unfortunately, those holding the levers of power today are more sympathetic towards these corporate families and helping them benefit at the cost of poor farmers.' 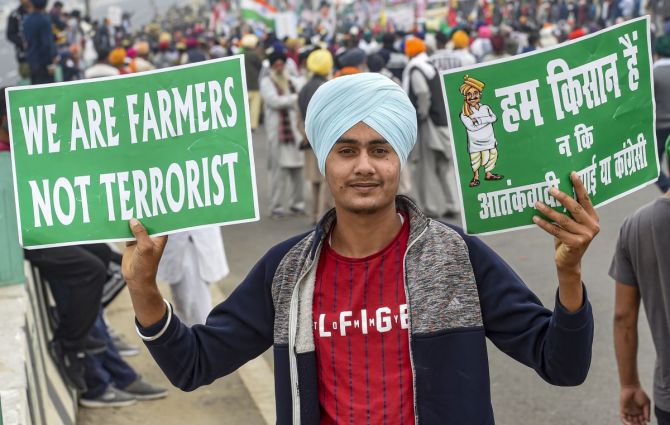 Haryana Kisan Manch chief Prahlad Singh Bharukhera explains to Prasanna D Zore/Rediff.com how from December 12 onwards the farmers under the umbrella of the All India Kisan Sangharsh Coordination Committee plan to corner the Narendra Damodardas Modi government over the demand of repealing the three farm laws.

After the failure of the talks between the All India Kisan Sangharsh Coordination Committee and representatives of the Union government after their written proposals were rejected by you, how are you planning to intensify the farmers' stir?

We have declared that we will block the Delhi-Jaipur national highway on December 12. We will block all the roads entering into Delhi.

We have also pleaded with the people to boycott all products of Reliance.

This will be followed by protests across all district headquarters in India by peaceful agitators on December 14. You will see peaceful protests by farmers across all states in solidarity with farmers' demand for repeal of the three farm laws.

We have called upon all the farmers staying close to Delhi to march towards the capital and join other farmers who are staying out in the outskirts of the national capital.

We will continue to protest at all Delhi borders by blocking the highways entering into Delhi.

We have plans to observe a toll-free day on December 12 wherein we will encourage people to not pay any toll tax at plazas. If it becomes successful and if we get people's cooperation then we will extend it for more days.

We will not allow any toll plaza to collect any money on December 12 and help fill the coffers of private players operating these toll plazas.

The government first takes road tax from those purchasing vehicles and then allows these private operators to collect road toll from us. This government has trapped us into a tax net far wider and brutal than those imposed even by the British.

How will farmers benefit by blocking all the roads entering into Delhi? Will the government accept your demand to repeal the three farm laws?

When the Union government prefers to play deaf and mute to our legitimate demandsm then the helpless farmers are left with no choice but to protest peacefully.

It is out of sheer helplessness that all farmer organisations have decided to resort to blockade of all the roads entering into Delhi.

Why is the government not repealing the three farm laws?

This government is doing the bidding of corporate families close to it.

On one side you have the farmers of India and on the other side are few corporate families.

Unfortunately, those holding the levers of power today are more sympathetic towards these corporate families and helping them benefit at the cost of poor farmers.

This nation doesn't belong to a few corporates; India belongs to her people, her farmers, her youth, her students and those who work for the upliftment of these sections.

When the farmers have been saying that they don't want these laws, which this government claims will benefit farmers, then why is the Modi government imposing these laws on us?

If the government, as you claim, is helping few corporate families, then why are the farmers singling out only Reliance by asking to boycott the company's products? Which are the other families that the farmers think will benefit from these three laws?

There are many corporate families that will benefit from these farm laws, but the major beneficiaries will only be the Adanis and Ambanis of India. The Modi government is acting like a puppet of these families.

Why is it that most of the farmers agitating against these farm laws are only singling out the Ambanis and Adanis?

Because this government dances to the music of only these two families.

No doubt, other corporate houses will also benefit, but the major beneficiaries will be a couple of these corporates like the Ambanis and Adanis. This government is doing everything these two families have been asking it to do.

These two families are the most visible faces of the largesse showered upon them by this government. Only a few corporate houses will benefit, but the losers will be the poor farmers, farm labourers who will be driven to desperation once these corporates swoop upon them to buy their farm produce.

We threw off the yoke of foreign rule 73 years ago, but this government now wants the nation to become slaves of corporates.

The farmers of India will not let India become slaves again. That is why we are protesting so desperately for the repeal of the three farm laws

Why can't the Modi government see the point that the farmers are making? The government claims that farmers will benefit because of these three farm laws. Do you agree?

We discussed each and every clause of these three laws with the representatives of Modi government, but at no time did any of the ministers point out the clauses that will benefit the farmers.

The ministers had no convincing answer to any of the issues that we raised with them during the meetings with them.

One common refrain from the Modi government is that these three laws will allow farmers realise a better price for their farm produce than what they are getting from traders at APMC mandis?

The talk that these laws will give freedom to the farmers to sell their produce to the highest bidder is nonsense.

Before these three laws came into existence, there was no law in India that prevented farmers from selling their produce to whoever they want. Despite having that freedom the farmers always preferred the APMC mandis because that is where they get better prices for their produce, security of payment, and absence of legal hassles.

These three laws will make the farmers slaves of only a few corporate families who will, once the APMC mandis close down, as has been witnessed in Madhya Pradesh, exploit the farmers for commercial profits.

What are the clauses in these three farm laws that the farmers are so scared of?

The Essential Commodities Act, 1955, does not allow hoarding of foodgrains for selling them at higher profits by creating artificial shortages.

One of these new farm laws of Modi government has given the permission to these corporates to store or hoard any commodity without inviting any action against them. This will only naturally lead to hoarding of foodgrains for reaping higher profits.

While these corporates will hoard whatever they want by purchasing from farmers at a lower price, sit on it, create artificial shortages, and then sell it in a manner so as to maximise profits for themselves and their stakeholders.

This clause will only help the poonjipatis (capitalists).

These laws also allow these corporates to purchase farmers' produce at their private mandis without paying any tax to the government while APMC mandis have to pay a tax to the state governments.

This will definitely put these corporate mandis at a greater advantage vis-à-vis APMC mandis.

If any government agency purchases foodgrains from farmers today, it is done at a rate fixed by the government. If the APMC mandis close down then private mandis will drive down the purchase prices of our produce.

Even now farmers don't get the MSP at APMC mandis until the government steps in as a purchaser.

Private traders will ensure they purchase farmers' produce at a price that will ensure maximum profit for him or his company. In the absence of APMC mandis, the helpless farmer will have no option but to sell his produce to these private traders at a price determined by them.

Why do you suspect that private traders will hoard fodgrains, create artificial shortages and then reap maximum profits?
Isn't that very unfair to tarnish every private trader with the same brush?
Why can't the farmers trust corporates?

Corporates work on the principle of maximising profits for themselves and their stakeholders. And farmers clearly will not be the stakeholders, in any way, in a corporate entity.

The duty of any government is to weave the interest of farmers with that of the nation, and by nation I mean of its farmers, poor labourers, the dispossessed, because these entities are engaged into a one-sided tug-of-war with capitalists and other entrenched interests.

These corporates can still make huge profits without the support of governments; they use market economics for maximising their shareholders' wealth, and most of these corporates own a huge shareholding in their corporate entities. Why should they bother about the welfare of weaker sections?

Tell me, who has stopped these corporate families to offer a better price for farmers' produce? Why aren't they offering us prices better than what we get at APMC mandis today?

They have not been doing it because it will not help them maximise their shareholders' or personal wealth.

Why do they need laws, as the government is claiming, to help farmers get a better price for their produce? 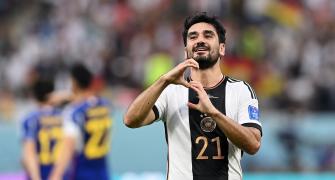 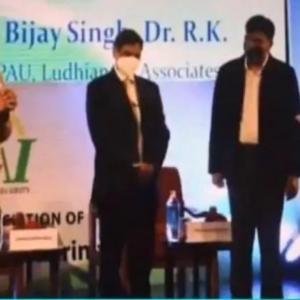