'The scope for negotiations depends on what has motivated this Chinese activity in the first place.'
'There might be a demand that China has for India which could result in a withdrawal, but is it a price India is willing to pay?' 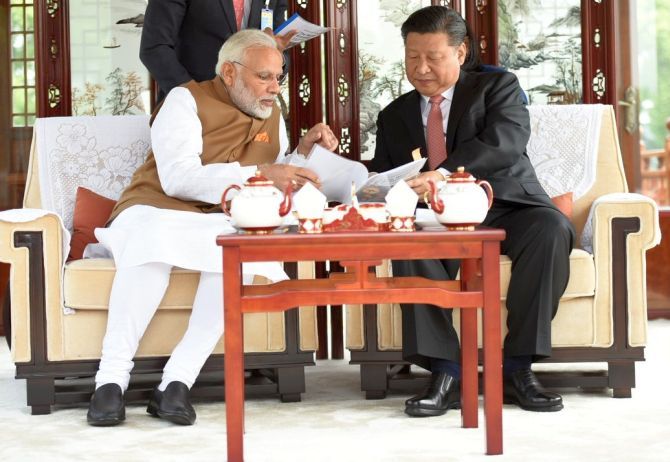 IMAGE: Prime Minister Narendra Damodardas Modi with Chinese President Xi Jinping at their first informal summit in Wuhan, April 28, 2018.
The Wuhan Summit was held seven months after the India-China military standoff in Doklam and intended to avert future confrontations between the Indian Army and the People's Liberation Army.

On Monday, June 15, night, soldiers from the Indian and Chinese armies perished in a military confrontation, the first since five Assam Rifles soldiers were killed by the Chinese in Arunachal Pradesh in 1975.

Less than a fortnight after Indian and Chinese generals 'agreed to peacefully resolve the situation in the border areas', People's Liberation Army soldiers brutally attacked and killed 20 Indian soldiers on Monday night.

Though there are reports of 35 Chinese casualties, Beijing has been silent on whether PLA troops died in the incident.

What effect will the deaths in the Galwan Valley have on China-India relations? Is a Wuhan-like, Mahabalipuram-like summit possible now?

"Does China think that the Indian government will reconstitute J-K because the PLA has seized some patrol points? That doesn't make much sense," Dr Walter C Ladwig III -- senior lecturer in international relations at King's College London, and Senior Fellow at the EastWest Institute -- tells Rediff.com's Utkarsh Mishra.

For the first time since 1975, there has been bloodshed on the India-China border. What, in your opinion, has gone wrong this time that had been prevented for the past few decades?

I do not think the standoff to date -- before Tuesday -- has been the usual jostling of patrols that takes place every spring/summer as the thaw happens.

There have been contacts at various points along the LAC (Line of Actual Control) in a similar period of time, including areas like Sikkim where such encounters are much less common.

This suggests pressure is being applied on a much wider front.

Furthermore, I do not believe the redeployment of additional troops from the military exercises in Tibet -- as China has done -- is a 'usual affair'.

The violent face-off happened in the Galwan Valley area, which is not a disputed territory. It cannot, therefore, be explained as one resulting from an unsettled border. Is this a part of a larger design? If yes, on whose part?

As I understand, Chinese claims to the Galwan Valley pre-date 1962.

What has happened in this particular episode is difficult to unpack because both the Indian MEA (ministry of external affairs) and the PLA's Western Command have issued statements stating that the other side violated their commitments regarding the LAC in the Galwan Valley.

So far, it is not clear from the reportage of the standoff whether Chinese troops actually 'occupied' Indian territory. What are your views on the claims and counter-claims regarding this?

In these cases, both parties can claim to be within their 'own' side of the LAC while the other perceives them in violation.

It appears that at least some of the disagreements in the Ladakh sector are explained by this, but it is hard to tell for sure from a distance.

I know that a number of amateur satellite imagery analysts have been trying to determine where points of incursion are vis-à-vis computer generated boundary lines, but I don't know how much faith we can have in the accuracy of that approach.

Is India now under pressure to act tough on China? Has the scope for negotiations significantly reduced? In what position has the latest incident put New Delhi? Is a Wuhan-like summit possible now?

The scope for negotiations depends on what has motivated this Chinese activity in the first place.

There might be a demand that China has for India which could result in a withdrawal, but is it a price India is willing to pay?

If the Indian government believes that Chinese troops are occupying portions of Indian territory, they have the upper hand.

It will be challenging to easily undo this fait accompli irrespective of the means employed.

Expelling them by force might be possible, but operations in this terrain and environment are physically demanding.

The altitude constrains the numbers of troops that can easily be brought to bear on either side, which also limits the escalation potential of such a clash.

Looking more broadly, there could be other ways that India brings countervailing pressure on China by targeting sensitive issues like Taiwan, the Quad, strategic partnership with the United States or territorial claims in the South China Sea, etc.

However, these are very indirect pressures which potentially makes it more difficult to achieve issue linkage.

Irrespective of the approach taken, I think the days of informal summits are numbered.

There are differing views on whether General Secretary Xi Jinping's weakening position within the Chinese Communist Party could be a reason behind increased tension at the border.
You have suggested in one of your articles that Xi would not like to antagonise India during such difficult times, especially when New Delhi is getting closer to Washington.
However, a counter argument hints at the role of Xi's rival faction behind these attempts to embarrass him.
Can you walk us through the CCP politics that could be behind the current standoff?

I don't know enough about the inter-party dynamics to speculate on this.

It is certainly the case that Xi Jinping has made his share of enemies during his rise to the top spot.

He has also come in for criticism by party elders for his handling of the relationship with the United States and his general disregard of Deng Xiaoping's admonition that China must 'keep a low profile and hide its light under a basket'.

How the two sides perceive this development matters.

For India, 'catching up' to China on infrastructure in this area is probably viewed as achieving balance after a long period of asymmetry.

However, if the Chinese view is that superior roads and better patrolling ability on their side of the line is the status quo, an Indian effort to achieve balance would be seen as 'upsetting' the normal order of things.

Academic research on Chinese behaviour in border disputes indicates that the PLA is likely to respond forcibly to demonstrate resolve if they perceive an adversary is seeking to 'increase the amount of disputed territory that it occupies or to improve its position in the local military balance'.

If Indian road building is perceived as seeking to alter the status quo, the PLA may be authorised to respond more aggressively than they would otherwise.

Could the fact that India has abolished the Constitutional special status given to the state of Jammu and Kashmir and has separated Ladakh from J-K to form two Union territories be the trigger for China's aggressive posturing in the region?
Have China's actions resulted from concerns it has regarding Pakistan's position on Kashmir or its own position in Ladakh after the Indian government, especially the home minister, stated that India will 'get back' Pakistan occupied Kashmir and Aksai Chin?

A number of observers have linked Chinese behaviour to the changed status of the former state of Jammu and Kashmir, but it is hard to see how this would be a prime motivation.

Indian territorial claims are not materially affected by the fact that Ladakh is a Union territory rather than part of a state.

If this is the motivating factor, what is China's objective in this regard?

Do they think that the Indian government will reconstitute J-K because the PLA has seized some patrol points? That doesn't make much sense.

Whether Amit Shah's comments about willingness to shed blood for Aksai Chin (and PoK) was a key factor in China's decision-making calculus is difficult to say.

It is not clear how well Chinese analysts and officials understand India.

The ones I have interacted with never seemed terribly knowledgeable and insightful.

It is possible that his statements in this regard were taken at face value.

How do you see the military strength of the three sides? Is India capable of fighting a war on two fronts?

It is really difficult to answer this kind of question in the abstract without reference to specific scenarios and conflict drivers.

One could talk about aggregate force ratios between the countries, but I think it would be irresponsible to speculate based on those kinds of simplistic 'bean counts' alone.

That being said, the recent trends with respect to defence budgets in India in general and the balance of procurement/modernisation funds versus personnel costs in particular are worrying. 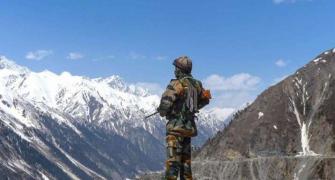 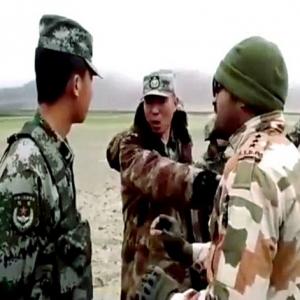