'Her presence before and during the Lok Sabha election will electrify the political environment.' 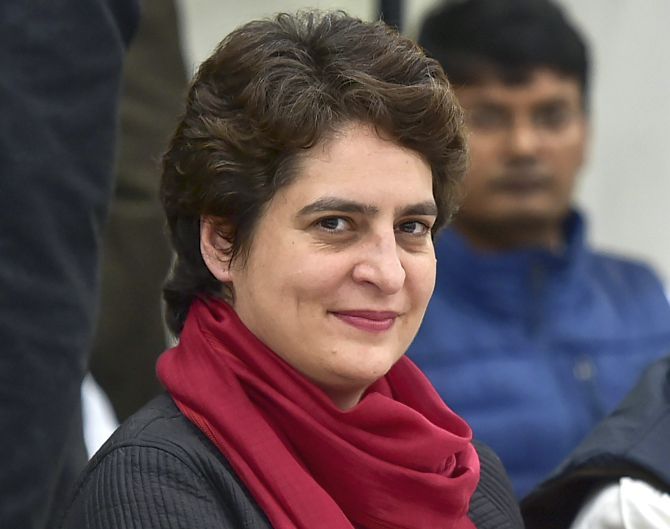 "In Lucknow, the entire media was after Priyanka Gandhi in that road show, but when it came to speaking, only Rahul Gandhi spoke," points out Prashant Trivedi, a political scientist who specialises in the social development, political economy of land reforms and rural studies in Uttar Pradesh.

"Priyanka is charismatic and will galvanise workers, not only in UP but beyond. But results will only reflect in those constituencies where local leaders have their own organisations," Dr Trivedi tells Rediff.com's Archana Masih.

What impact is Priyanka Gandhi likely to have in UP politics?

She is a charismatic leader. Hopefully, she will be able to galvanise the Congress party, not only in UP but beyond.

Her presence before and during the Lok Sabha election will electrify the political environment. It will be a more interesting election to watch than 2014.

2014 saw a one sided carpet bombing by the BJP. This time it will be a multi-starrer campaign.

With Priyanka Gandhi's presence, 2019 will be a more interesting election to watch in UP.

What difference can she make in eastern UP, particularly Varanasi where the prime minister's popularity holds sway?

It is not necessary for Priyanka Gandhi to make a dent in the PM's popularity because the prime minister's popularity is getting dented otherwise also.

The issue of stray cattle is the biggest issue in the rural areas of UP. Two years ago, the Yogi Adityanath government closed abattoirs, legal or otherwise, which has resulted in manifold increase of stray cattle.

Farmers of all castes are finding it very difficult to protect their standing crop. They have spent winter nights in the field protecting their crops.

Small farmers blame the state government, but section of bigger farmers might think that this is created by the Yogi government and Modi can't be blamed. These issues are denting the mass base of the BJP.

Priyanka held meetings with block level workers late into the night till 5 am. Isn't it too late to try and pep up party workers to make them into a fighting force?

Parties depend on caste-based voter support. Yadavs for the SP, Jatavs for the BSP, Brahmins and upper castes for the BJP.

A particular caste forms the core of political parties. The Congress does not have that core neither does it have an organisation like the RSS or Left parties. At the same time they have local satraps who have their own networks.

The Congress performs well only in those constituencies.

Priyanka will galvanise people, but results will only be reflected in those constituencies where local leaders have their own organisations.

It is a damning comment on the oldest party in India that in a modern India it still pins its hope on the Family.
Is this culture of the Congress unchangeable?

Dynasty politics is a moral issue. It has no place in a democracy. But beyond that it doesn't have a real life effect on people.

In India, dynasties are not only confined to politics. They are in the corporate world and in other professions.

For some strange reason, dynasties are acceptable to people. Political parties are not fielding sons and daughters for losing the elections. They feel they have higher chances of winning and it seems to be coming true in many cases.

Dynasty politics is somehow culturally acceptable in India and all political parties are indulging in it. It is not going to change very soon. 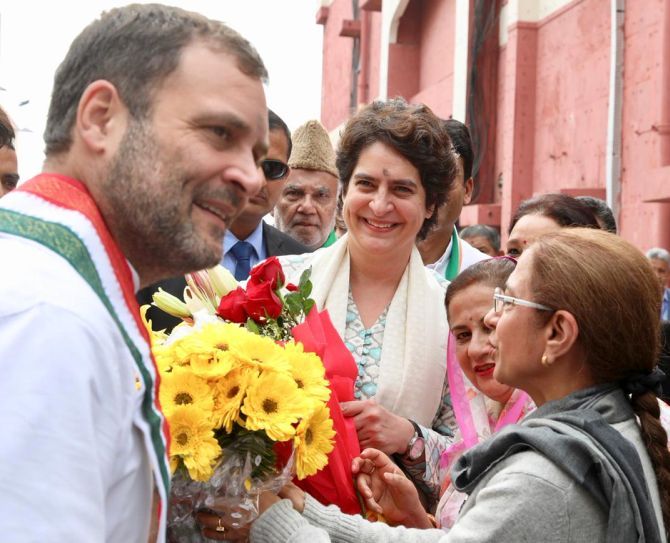 Do you think Priyanka will contest the election?

She may contest her mother's seat, one can't say.

The Congress would not like to raise any other person who has the chances to come parallel to Rahul Gandhi.

In Lucknow the entire media was after her in that road show, but when it came to speaking, only Rahul Gandhi spoke.

The Congress manages the show in such a way that the leader remains the leader. Nobody can come close to that.

Rahul Gandhi has himself travelled a long distance in these 15 years. After defeating the BJP in 3 states, even the BJP is not calling him 'Pappu' anymore.

Rahul and Priyanka have the potential to reach out to the people and placing an alternative for the people.

UP constituencies have been divided between Priyanka Gandhi and Jyotiraditya Scindia. What is it about the make-up of eastern UP that this area has been assigned to her?

The Congress is not like any other party. It is a different kind of party. It does not have a pre-determined mass base. It is neither a cadre-based party.

The strength of the Congress is that it is acceptable to all sections of society.

The BJP propaganda in the last five years of a 'Congress mukt Bharat' never struck a chord with the people. You will not find an ardent Congress supporter or an intense Congress hater.

People agree or disagree with its policies, but don't hate it.

The party has a wider acceptability which is a strength of the party.

Jyotiraditya Scindia and Priyanka Ganddhi will concentrate on constituencies that they hope will be winnable for the Congress.

The party depends on local leaders in the absence of their own cadre. Wherever local leaders have good rank and file of workers, they give a good fight.

What is the rationale behind assigning Jyotiraditya to western UP and Priyanka to eastern UP?

I can't pinpoint the rationale behind it, but the party should not have confined Priyanka to a region. She has mass appeal, they could have used her in UP and beyond. You say she is a mass leader, but she has nothing to show on her mark sheet.

You are right because she has not taken any responsibility, neither in the party or the government.

She has not delivered, but still whenever she has campaigned in the Amethi-Rae Bareli area, people know she can connect, which is a great strength for a party like the Congress, which depends on the charisma of its leaders.

She will be a great asset for the Congress party in the election.

By contesting all the seats in UP where the SP-BSP are in alliance, won't the Congress play the role of spoiler and ultimately benefit the BJP?

Once the Congress enters the fray, it has the potential to unsettle the BSP-SP equation.

It has the ability to dent into BJP votes by attracting the upper castes, particularly Brahmins who were traditional voters of the Congress before the 1990s.

It will attract Muslim voters from the mahagatbandhan also.

Won't it play the role of spoiler?

No. The voter will judge.

In how many seats is there going to be a direct fight between the Congress and BJP in your view?

8 to 10 seats. The mahagatbandhan is a very formidable force of social coalition. It is expected to do very well.

In the last five years, how has the political situation in UP changed?

In the last two years, the state government has become a liability for the central government.

Law and order, farmers, jobs, there is all round disappointment with the state government. 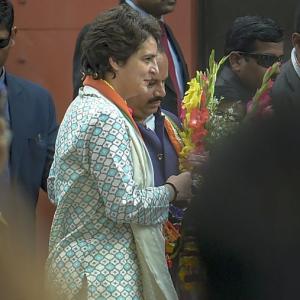 PHOTOS: Priyanka roars into UP with roadshow