News
Business
Movies
Sports
Cricket
Get Ahead
Money Tips
Shopping
Sign in  |  Create a Rediffmail account
Rediff.com  » News » 'Save my grand-daughter from the Taliban'

'They must be hiding somewhere in a country where the Taliban would not even spare a 4-year-old girl.' IMAGE: A woman who lost her husband in fighting the Taliban sits with her children in a tent at a makeshift camp in Kabul, August 12, 2021. Photograph: Paula Bronstein/Getty Images

It has been a lonely fight for Bindu Sampath from the time her daughter Nimisha decided to marry a man named Bexin and then convert to Islam.

Though Bindu filed a habeas corpus petition in the Kerala high court in July 2016 to get her daughter back, the court granted permission to Nimisha to live with her husband as she was an adult.

When Rediff.com's Shobha Warrier spoke to Bindu in 2016, she was hopeful of her daughter coming back to her.

Then, she along with her husband and some other people went to Afghanistan to join ISIS.

In 2017, Bindu received a message from Nimisha informing her that she was in Afghanistan.

In 2019, around 900 ISIS members surrendered in the eastern Afghan province of Nangarhar. Nimisha and her husband were among them.

When the National Investigation Agency revealed the photographs of those who had surrendered, Bindu identified her burqa-clad daughter Nimisha, her grand-daughter and also her son-in-law.

From then on, she has been fighting a lonely unsuccessful battle to bring her daughter back to India, so that she could face a trial here.

After the Taliban took over Afghanistan and freed all the prisoners, Bindu has not heard from her daughter.

Now, she wants to bring her four-year-old grand-daughter back to India. She broke down several times during the conversation with Shobha and wept uncontrollably thinking of what the little one must have been going through right now.

You had written letters to the prime minister, home minister and the external affairs ministry a few months ago requesting them to deport your daughter and grand-daughter to India and conduct a trial here.
Now that the Taliban have taken over Afghanistan, you wrote to them once again.
Did you get any response from anyone in the government?

I have only been asking to deport my daughter to India, not let her roam around free. Let the government do a trial here and give my daughter any punishment they want. Not even once I had asked for any leniency.

My daughter is in this situation only because of some Muslim extremists who brainwashed her.

Is there not something in this country called Right to Live even for a person who is a criminal or a dreaded extremist? IMAGE: Displaced Afghan women and children at a mosque in Kabul that is sheltering them, August 13, 2021. Photograph: Paula Bronstein/Getty Images

Your grand-daughter is just 4 years old...

Did this child do anything wrong? What is her fault to endure all the hardships?

Is there no law in this country that protects the rights of a child? Does this baby have no right to live?

From the 11th of June, I have been writing to the Government of India pleading to protect the rights of this child to live.

What kind of a government is ruling this country that has no time to listen to the pleas of a mother?

Let the court in India rule that my daughter is an extremist and let her get punished for her wrongdoing.

But what wrong did the baby do? Let me take care of her, let me bring her up.

What this government has done to me is cruel and anti-humanitarian.

If the government had deported them, today I would have had at least the baby with me.

I do not know why you have an NIA here, why you have a government here. By not deporting my children, are they not handing them over to the worst extremists?

I don't have anybody with me to ask these questions to the government.

I want to ask, does your Mother India, your mother culture talk about pushing a baby into the hands of cruel hardcore extremists?

Didn't you get any response from the government?

They told me she would be a human bomb walking around. The next moment they said they would put her in jail till her last breath.

If you are going to put her in jail till her last breath, how will she be walking around like a human bomb?

Does the Indian government have no responsibility for the life of that 4 year old?

As a citizen of India, I have only been asking to deport my daughter and conduct the trail here? You give her whatever punishment you want but do it in India. Is it asking too much as the citizen of India?

But I have been treated like a worm, worse than a worm.

What has happened now? The Taliban have opened all the prisons. Now they are absconding. Where have they gone? I have no news of them.

Do you know what they told me sarcastically? They said, my children must have gone to a Taliban shelter! IMAGE: A family of German citizens after being evacuated from Kabul at Frankfurt Airport, Germany, August 18, 2021. Photograph: Thilo Schmuelgen/Reuters

Who said that? The NIA?

Not the NIA, a government official. When the time comes, I will reveal the name of the official.

Please tell me what I should do. (breaks down)

They treated me with contempt and disdain. Why are they humiliating me like this? What did I do to deserve this?

Yes, the Taliban have opened the prisons. But what safety or security do women have there?

I can understand the government's feelings towards my daughter but what wrong did this innocent baby do to the government or the country? Does she deserve to be treated like this?

You had filed a second writ petition in the Kerala high court to direct the Indian government to deport your daughter and grand-daughter...

I was told the government would argue using the 2019 video.

Let me ask you, would our opinions not change as days pass by?

I agree she might have said something unwanted in 2019, but she might also be saying something else in 2021. Do they not have the duty to bring before the court what she says in 2021?

Is this government not responsible for the mental trauma I am going through every second of my life?

Is there no value for my feelings in this country?

I have written letter after letter to the government when they were put in jail in Afghanistan. But there was absolutely no response. Why do we have such cruel people ruling us? 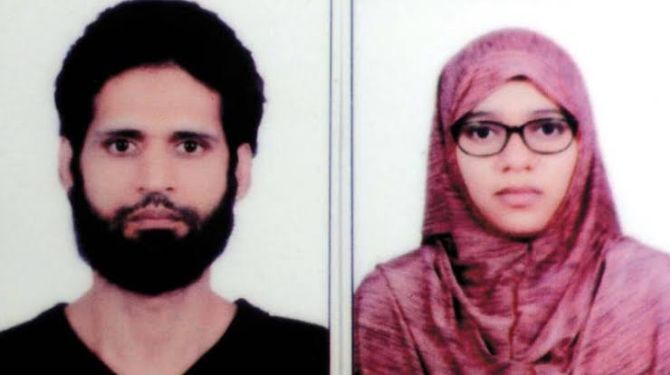 It is total chaos in Afghanistan. Nobody knows what will happen to the women there. And your daughter and grand-daughter are missing...

I don't know what to do. I am totally helpless. I cannot bear the thought of the little one going hungry. There is no food, there is no water, there is no shelter. They must be hiding somewhere in a country where the Taliban would not even spare a 4-year-old girl.

You call my daughter an extremist, but is she not thrown into the hands of worse extremists along with her baby, now?

A woman who works in this government told me if your daughter came to India, we would torture her the maximum.

Is this how you talk to a mother?

I think she wanted me to back out.

Do you feel they are humiliating you because your daughter is an extremist?

Exactly. What do they gain by humiliating me?

I haven't done or said anything to tarnish the image of the government, still why do they isolate me, a woman? I am not a member of any political party but I am described as the 'Communist mother'.

I do not get sleep thinking about what will happen to my little one, what those heartless people would do to my baby... 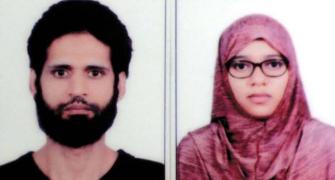 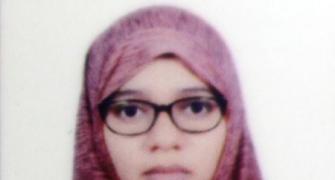