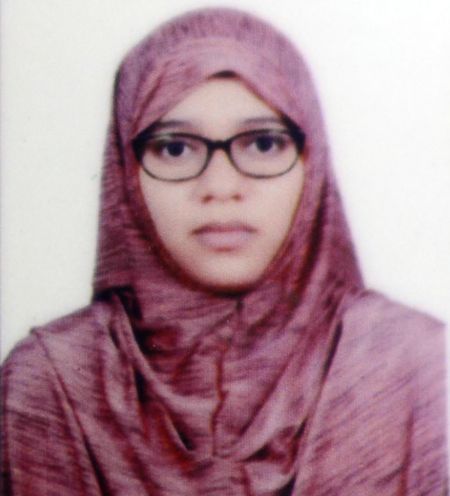 'She won the first prize in the state for chanting shlokas from the Gita.'
Nimisha, a young pregnant woman who converted to Islam, is among a group of people from Kerala suspected to have joined Islamic State.
Nimisha's mother speaks to Rediff.com's Shobha Warrier.

Nimisha was the apple of her mother's eye, a talented girl who won prizes for classical dance and music.

Nimisha, who used to win prizes for chanting the Bhagavad Gita when in school, witnessed a change of faith, of name and in attire, in a relatively short time.

She changed her name to Fathima and married Issa, a Christian who also converted to Islam.

Merlin (external link), a woman from Kochi working in Mumbai, also converted to Islam before getting married to Issa's brother Yahiya.

All four went missing soon after. The last their families heard was that both couples had gone off to Sri Lanka.

Nimisha was a student of the Century Dental College in Kasargod when she met Issa. Some four days later the two were married.

Nimisha's mother Bindu, a beautician based in Thiruvananthapuram, is shocked at the path that her daughter has taken. She spoke to Shobha Warrier:

"Her passion was reading. She dreamed of owning a house with a room full of books. All she wanted to do was to sit amidst the books and write poetry.

My daughter was an extremely talented girl who used to perform both the Mohini Attam and the Bharata Natyam. At age three she showed a disposition towards art. She participated in the prestigious Soorya Dance and Music festival in Thiruvananthapuram.

As a student of the Chinmaya Vidyalaya, she won the first prize in the state for chanting shlokas from the Gita.

I always wanted my children to learn everything and not restrict themselves to studies alone. I felt this would make them open to society and the world at large.

My daughter was extremely good at everything she did. That is my daughter, not the person being portrayed in all the newspapers. I don't think my daughter is a bad girl. She can never be. She is still a good girl."

The daughter who had been extremely close to her mother in the past did not reveal the changes that were taking place in her life. She changed her name to Fathima, began wearing the burqa and converted to Islam.

The mother says the family was not aware of the changes in her, and the college authorities did not inform them of the same.

Last November, Nimisha went missing with her husband. When she stopped taking phone calls from home, her family filed a police complaint.

At a court appearance Bindu saw her daughter in a burqa, with a man she did not know. Although Bindu had filed a habeas corpus petition in the high court, the court deemed it fit to grant Nimisha permission to live with her husband as she was an adult.

It was then that Bindu discovered another shocking truth: That Nimisha had met her husband a mere four days before their wedding.

"I do not know what circumstances forced my daughter to change herself. The college only contacts us when they need fees. Is it not their duty to inform us when they see any such dramatic change in a student? Parents live at home and once the children stay in a hostel and live far away, we expect the college professors to act as their parents there," says Bindu.

"I feel the college professors never did their duty. If they had done so, my daughter would not have had such a fate. If we don't want this fate to happen to other children, we should see to it that the college authorities do heir duty," Bindu adds.

"The last time we heard from Nimisha, she said that she and her husband were going away to Sri Lanka."

Protests from her mother did not have any effect on the daughter, and the couple left for Sri Lanka. "After that, there had been no news," says Bindu.

The mother prays for her daughter's safety. "I am praying for my daughter every moment of my life, and I also pray for Merlin. I consider Merlin an adopted daughter. Her mother calls me every day and both of us share our grief. What more can we do?"

"I beseech you to please think of us and have some thought for our feelings," says Bindu. I am still positive that my daughter will return. I can only request everyone out there to pray for my daughter."