'If the BJP continues with Nitish as CM, it will not consolidate its position further in future.' 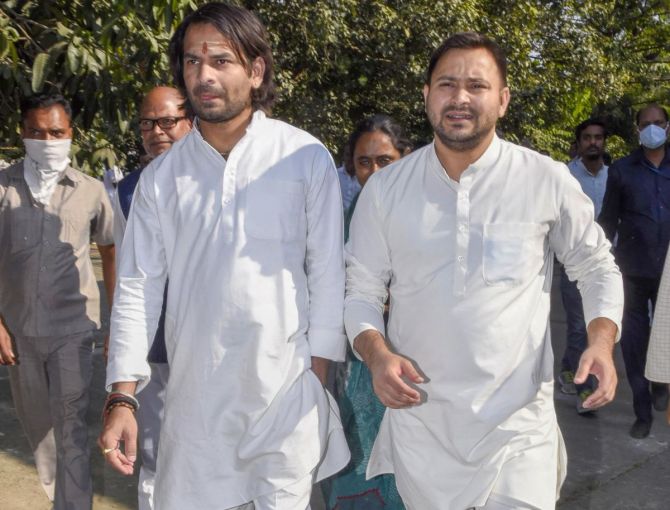 "It will be in the BJP's self interest to have a CM from their party," Professor Rajiv Kumar, head of department of politics, Mahatma Gandhi Central University, Motihari, tells Rediff.com's Archana Masih in the conlcluding part of the interview.

What do you see as the future of Nitish Kumar and the JD-U?

Nitish Kumar's era is over. He is getting on in years and has been rejected by the voters.

If the BJP continues with him as CM, it will not be able to consolidate its position further in future.

The mandate clearly shows that people are not happy with Nitish Kumar. His continuance as CM will have a negative impact on the BJP.

So it will be in the BJP's self interest to have a CM from their party.

In that case, how long will the BJP allow Nitish Kumar to remain as CM?

That depends on the BJP and also on Nitish Kumar, whether he will seek other alliances.

Nitish Kumar has differences with the BJP on Article 370, communalism, etc and the two partners did not fight a united campaign.

How will the Bihar result impact the election in West Bengal in a few months?

The BJP's policies are getting increasingly polarised under Modi. This will have an impact on Bengal as well. The question is if people will accept this polarisation or not.

This is Mahatma Gandhi's country. There are differences between Hindus and Muslims, but voters have started thinking about where we are headed as a people -- and whether the policy of polarisation is good for the country or not.

Chirag Paswan made a big dent in the JD-U's performance, but won just one seat. What future does he have in Bihar politics?

Ram Vilas Paswan and Chirag do not have an appeal at the state level. They are more acceptable at the Centre.

Chirag is young and needs to come out of his father's shadow like Tejashwi.

Tejashwi has very intelligently come out of Lalu's shadow. At 31, he has gained recognition of being a capable leader.

Chirag has to still prove himself.

What is the future of the JD-U? Is Bihar going to see a bi-polar contest between the RJD and the BJP in times to come?

India's multi-party system is either family based or individual based.

Tejashwi Yadav has established himself as a leader by running a strong campaign. How do you see him as the face of the Opposition in the state?

The only popular leader in Bihar is Tejashwi Yadav.

The BJP does not have a popular leader in the state. Nitish is on the decline and the Congress has no leader.

The politics of Bihar will revolve around Tejashwi Yadav.

If you compare Tejashwi with Akhilesh Yadav in UP. Akhilesh confined his functioning as CM to a few castes. Though he did fast and good development work, he failed to secure a second term because of this failing.

The perception of a leader should be such that he is acceptable to a wide section of society.

Tejashwi has acceptance among the masses, but he still has to penetrate at every level of society.

Many who did not want to vote for Nitish also did not vote for Tejashwi because he does not have acceptance amongst a diverse cross section.

Tejashwi has to establish a wider acceptance base.

If Nitish is CM, Tejashwi is not going to make it easy for him to function.

The continuance of Nitish Kumar as CM will benefit Tejashwi, not the BJP.

Politics is a shrewd business and about opportunities. If Nitish Kumar wants to switch, this would be the best time.

The BJP shifted all responsibility of misgovernance on Nitish Kumar, even though the BJP was a part of his government.

The BJP governs at the Centre and promised Bihar a huge package. If Bihar's infrastructure is not good, the BJP is equally responsible.

The party did not mention the special package during the campaign and stayed away from Nitish also.

Nitish also has an authoritative way of functioning, similar to Modi.

When authoritative and popular leaders fall, they bring the party and ideology down with them.