'The Indian Army and paramilitary have to land more in Assam as the situation is very bad, especially in upper Assam,' says BJP MLA Binod Hazarika whose home was burnt down by mobs. 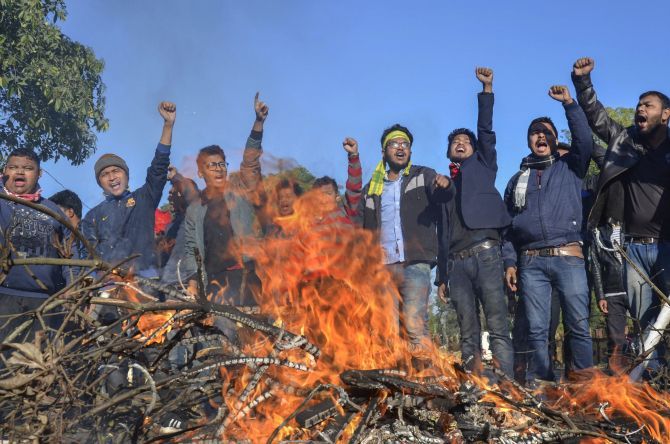 IMAGE: Demonstrators raise slogans during a strike called by the All Assam Students Union and the North East Students Organisation to protest against the Citizenship Amendment Bill in Dibrugarh on December 10, 2019. Photograph: PTI Photo

In the conflagration over the Citizenship Amendment Bill that has gripped Assam over the last few days, Bharatiya Janata Party MLA from Chabua Binod Hazarika's home was burned down by a mob.

"People are being told there will be no land left for them as Bangladeshis are coming... They are getting angry hearing such false rumours," Hazarika tells Syed Firdaus Ashraf/Rediff.com.

Around 2 pm on Wednesday, December 11, my house and my office were ransacked.

Within minutes, a mob of around 1,000 people came and set everything inside my home on fire.

The police asked me on the phone whether they should open fire on the mob, but I said no because I did not want the situation to go out of control. I didn't want anyone to lose their life or get injured.

Luckily, my family and I had just left my home a day earlier because the situation was getting out of control near my house.

I spoke to Chief Minister Sarbananda Sonowal for help to disperse the crowd. He then sent for the Indian Army. Only after that did the mob leave my house. One of my personal security officers was the only person to get injured in the violence.

These people are not from the All Assam Students Union or any other students union. This mob was of local Congress leaders who are instigating innocent Assamese people. I have kept the (video) footage.

Wrong information is being propagated to the public about the Citizenship Amendment Bill. My constituency is in the upper Assam belt and these are nice people. They are being told there will be no land left for them as Bangladeshis are coming.

Moreover, a lie is being spread that the Assamese language will die soon and the Bengali language will take over. People are getting angry on hearing such rumours.

If I was not an MLA, I too would have fallen for such false rumours.

I have spoken about this to the chief minister. My constituency is part of his home land. Now since there is too much protection, people could not attack there, so they came after me. They made seven attempts to burn my house before finally succeeding.

People came with bows and arrows to attack my house.

Nobody is listening to appeals and about the CAB. People now have to be arrested and sent to jail.

The Indian Army and paramilitary have to land more in Assam as the situation is very bad, especially in upper Assam.