News
Business
Movies
Sports
Cricket
Get Ahead
Money Tips
Shopping
Sign in  |  Create a Rediffmail account
Rediff.com  » News » 'Accidents were waiting to happen and it happened'

'The lay of the runway is not at all safe.'
'Even operating a 737 is dangerous there.'
'During the monsoon, they must ban landing on runway 10.' 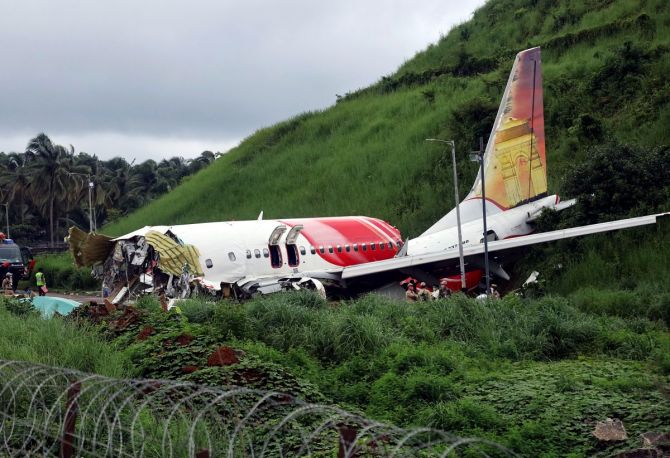 Another gruesome plane accident in India, and 18 people lost their lives in the plane crash at Kozhikode's Karipur airport on August 7, 2020.

It was a tragedy waiting to happen.

In 2011, in his report, Captain Mohan Ranganathan had said Kozhikode airport was not safe. The report was disregarded and the accident that had been warned about occurred.

"The Kerala government must put its foot down because the ministry of civil aviation is not going to do anything," Captain Ranganathan tells Shobha Warrier/Rediff.com.

After the 2010 plane crash in Mangalore, you had written to the civil aviation ministry that Kozhikode airport was also unsafe during the rains. Now, a tragic accident has happened.

After the Mangalore plane crash they formed a civil aviation safety advisory council. I was part of that, leading the operations group. Mr Arun Rao was the head of the annexe 14 aerodrome division, and both of us have done studies independently on Kozhikode.

We had given a very, very, strong report about the dangers there and also the deficiencies.

I had also done an in-depth inspection of Mangalore. After that, we had made certain recommendations. We had pointed out very serious deficiencies in both the airports.

What were the deficiencies you found? Is it only the table top runway?

No, it was not just the question of the table top runway.

In both places the ILS (instrument landing system) antenna was on a concrete structure which was illegal.

The ICAO (International Civil Aviation Organisation) had recommended that the ILS antenna should be on a frangible structure.

So, even if an aircraft hits it, the aircraft will not be damaged; only the structure will be broken.

The Mangalore crash took place on May 22, 2010, and it was all covered by the court of enquiry report.

When we took it up strongly, it was ensured that they would fill up the area and cover it up in both Mangalore and Kozhikode.

Even though the mandatory requirement of what you call the runway and safety area (RESA) is 90 metres, we had also recommended what ICAO recommends; that you need 240 metres for safety reasons.

It is not the runway length, but beyond the runway area on both sides, there should be a RESA of 240 metres.

This way, you get the mandatory 60 metres strip and also the 240 metres RESA.

That way on either side, they will have a clear space of 300 metres.

That will make it quite safe for most aircraft even if you overshoot.

But for them to do that in Mangalore and Kozhikode, they will have to reduce the runway length which means you can't have big aircraft landing there.

As it is, Karipur is unfit for wide-body aircraft.

The Airport Authority of India wrongly classified it as Code 4E to accommodate wide-bodied aircraft.

Mr Arun Rao had pointed out that it can only be Code 4C.

I had written that because there was not enough space on either side of the runway, if an aircraft hits the sides, it will go down the slope.

If it overshoots also, it will go down.

So, I had written that we could not have wide-bodied aircraft in Karipur.

In 2015 they had shut it down for wide-bodied aircraft.

But because of both political and commercial pressure, they reopened for operating wide-bodied aircraft in 2019.

Last year too, there was a near miss by an Air India flight at Karipur and a narrow escape for the passengers. 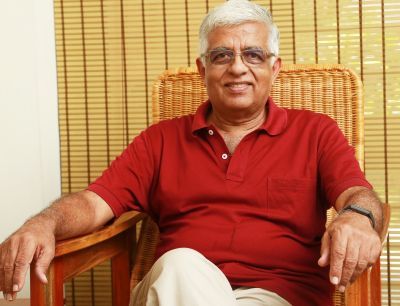 See, they keep on waiting. Their attitude is, as long as nothing happens, sweep everything under the carpet.

When I had raised the issue on Karipur airport, my uncle Justice V R Krishna Iyer wrote a very strong letter to the then prime minister Dr Manmohan Singh about the airport.

Vayalar Ravi was the minister of civil aviation then. He wrote back to Justice Krishna Iyer that they were taking all actions to make Kozhikode safer.

After that, they ensured that the concrete structure was all covered up. At least, that part, Kozhikode was better. But the other issues were not attended to.

When they introduced ILS 10, I pointed out that they were doing it only to lower the minima (minimum approaching altitude) as there were no hills on the western side.

There were hills on the approach side in the east where the lowest heights an aircraft could come.

Aircraft were being diverted. So, to make aircraft come on a lower level, they brought ILS on runway 10.

I pointed out that even the way it was designed was also dangerous as it did not take the obstructions into consideration.

In fact, I sent a detailed letter on the obstacles. All that was ignored completely.

Is it scant regard for safety?

Even an accident report is vetted by a joint secretary, and they delete all the sentences which can point to their deficiencies of the DGCA, Airport Authority of India or Air India.

Only after that, they will clear the report. This was exactly what they did for Mangalore.

It means reports written by professionals get changed by bureaucrats...

They do not want anyone to find the real facts. They will only pick a team who will help them cover up.

That was why we were removed from the council and they put some yes-men over there.

So, accidents were waiting to happen and it happened now.

Was it lack of visibility or a slippery runway that resulted in the accident?

The lay of the runway is not at all safe.

Even operating a 737 is dangerous over there. During the monsoon, they must ban landing on runway 10.

This is political. These people must have picked up a lot of real estate around the area. When you develop an airport, you make money.

Maybe in those days when the place was chosen, they must have been operating small planes. Without locating a new place, they kept on expanding the same place for bigger aircraft.

The local politicians must have been pressurising because of the Gulf connection as a lot of people from that area work in the Middle East. So, they want an airport closer to their place, but they do not realise the danger.=

Where will this kind of attitude lead to? More accidents?

It is for the Kerala government to act now. They must put their foot down because the ministry of civil aviation is not going to do anything.

If they want to protect the lives of their own people, it is about time that the state government decides to act.

I would say politics is playing with the lives of people. 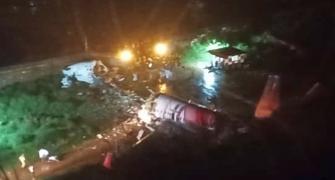