News
Business
Movies
Sports
Cricket
Get Ahead
Money Tips
Shopping
Sign in  |  Create a Rediffmail account
Rediff.com  » News » Will Modi give the Nagas a separate flag?

'The Nagas want a flag of their own, to share the Kohima skyline with the national tricolour.'
'The the government says you can have a flag for cultural and ethnic occasions.'
'The Nagas say that will be a bit like an NGO having its own flag,' argues Shekhar Gupta.
Illustration: Dominic Xavier/Rediff.com Google tells me that the real Napoleon Bonaparte used somewhat more vivid imagery to rhetorically raise and dismiss the question, what's a throne? For my limited purpose this week, I'm content to use what Rod Steiger, playing him in the 1970 classic Waterloo, said.

Something like, what's a throne? It's an overpriced piece of furniture.

This was still the early 19th century, a throne still mattered.

In most of the modern world, it doesn't even exist.

Nationalism has crept back pan-nationally to some extent lately, yet the symbols of the nation-State -- thrones, crowns, anthems, flags -- have generally faded from our consciousness.

They haven't gone away, though.

Sportspersons take these very seriously at championships, for example.

It is just that the modern nation-State is more stable and secure and the value of such symbols has become commemorative, less existential.

We can, therefore, follow up this argument with a rhetorical, but relevant question of our own: What is a flag? Would today's Napoleon have said, hah, an over-rated piece of cloth? Probably not.

But his lancers would not have gone to fight Wellington at Waterloo today, holding the great banner aloft.

The reason we bring in an apparently far-out question like 'what's a flag' is because that is the issue still holding up the long-drawn-out process to finally end India's oldest, and bloodiest, insurgency, Nagaland.

Both the Indian State and the Nagas accept they have done terrible things to each other, that violence no longer works.

The Nagas still want a flag of their own, to share the Kohima skyline with the national tricolour.

The Modi government isn't willing to concede that.

Negotiations have now reached a level where the government says you can have a flag for cultural and ethnic occasions.

The Nagas say that will be a bit like an NGO having its own flag.

Banking leader K V Kamath has a brilliant line on the art of negotiation.

The best negotiation, he says, is where both sides leave the table just a little unhappy.

Translated, it means, each one concedes something they would have preferred not to.

For Muivah's Nagas, to sign up without the consolation of a flag is humiliation.

For the Modi government, the choice is equally tough.

Just on October 31, it celebrated taking down the flag of Jammu and Kashmir and presented the idea as a tribute to Sardar Patel, whose birth anniversary it coincided with.

How do they concede to a tribal state of just about 3 million people what they have taken away from one much bigger as a statement of rejuvenated Indian nationalism?

The idea of symbolism for the BJP government of Narendra Modi is a far cry from Vajpayee's.

Asked how Kashmiri separatists would negotiate if India insisted that it be within the framework of its Constitution, Vajpayee had disarmingly replied, we will talk within the parameters of humanity (insaniyat).

Modi's BJP has moved back to harder, inflexible, and, if I may add with some caution, more abrasive nationalism.

Such nationalism can't be 'cool' about its symbols.

That's why the lowering of one state's flag is celebrated, another one demanding it is resisted and a third one (Karnataka) still having one of its own reluctantly tolerated.

No cinema hall dares to stop playing the National Anthem even after the Supreme Court withdrew its own order.

People are harassed if they refuse to stand up in movie halls.

It's as if the new generation of Indians have to prove to each other once again that they aren't just patriots, but nationalists.

This BJP is much closer to its ideological founding fathers' vision of ek vidhan, ek nishan, ek pradhan (one Constitution, one symbol, and one leader) for all of India.

To that extent India has moved several steps back into its mindset of the paranoid 1960s.

If you, like me, are a child of the 1960s, and step back into that decade, imagining the India of today would be an impossibility.

Would our generation have imagined that 1971 was the last real war India would fight for the next five decades?

Would we have imagined that by this time India would have subsumed all its insurgencies and separatist political movements?

Respected scholars, most notably American Selig Harrison, were talking about an inevitable break-up of India in that 'dangerous decade'.

India proved them wrong, and today, it stands at the most secure juncture in its history, politically, strategically, militarily and economically, never mind the recent trouble.

I must underline that this hasn't happened after 2014.

I go back to around 2003, post Op Parakram and India's use of coercive diplomacy as this turning point.

So, this virtuous epoch of a secure India has matured over more than 15 years now.

You cannot see this reversing easily.

Not externally. Nor internally, unless our politics messes up our social cohesion.

India is now far too strong and important for anyone to push it around, or grab any territory.

This is when we Indians should have also felt that sense of security and enjoyed this well-earned comfort.

On the contrary, we have brought back some familiar old insecurities again.

You will find the reason in the politics of the Modi-Shah BJP.

See it this way.

The critics of this government charge it, with some schadenfreude, with having internationalised the Kashmir issue.

This is a fact.

But today India is strong enough to take this degree of internationalisation in its stride.

Until today, three months after the August 5 changes, no nation other than the three usual suspects has asked India to reverse them.

The rest pretty much concede this -- if mostly in silence -- as India's internal affair.

Of course, it cannot go on like this forever.

Kashmir has to see much greater normalcy much faster, its politicians and prominent people can't remain detained for too long and the communication denial has to end.

Or international pressure will rise and even friendly governments, like Trump's, for example, will find it difficult to stay aloof.

And if normalcy returned, would Kashmir continue to play so strongly in the national consciousness?

Or, more bluntly, will it still feed mass insecurity and thereby hyper-nationalism?

Trouble in Kashmir means threat from Pakistan, radical Islam, a fifth column, jihadi terror, and so on.

It is a straight and unbroken thread of national insecurity.

With the economy declining and job losses, the need to not just retain but strengthen this hyper-nationalist push is even stronger.

From that vantage point, there isn't much electoral percentage in saying we are so wonderfully secure.

Because then, how do you run your politics without the fear of the 'other'?

In the decades between 1972 and 2014, Indian nationalism had evolved into a more relaxed, secure, and comfortable state of mind.

We are being dragged back from those times, into fighting once again the fears we thought we had defeated 50 years ago.

It is fascinating that it is precisely in this mood that two contrary games are playing out: Where the denial of a flag to one is a national celebration, and conceding one to the other looms as an inconvenient compulsion. 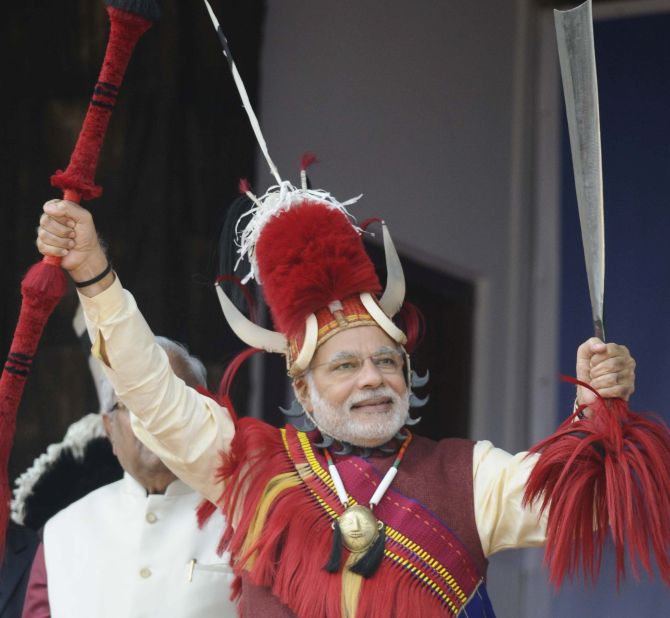