'It is certain Jayalalithaa will be in no position to attend to official business.'
'Indeed, doctors would have forbidden anything that would aggravate her condition and lead to complications,' says B S Raghavan, the distinguished civil servant, advising how a Constitutional vacuum can be averted in Tamil Nadu. It does not require any reading between the lines of the press release of October 6 issued by the Apollo Hospitals, Chennai, to have some sense of the health of Tamil Nadu Chief Minister J Jayalalithaa, admitted to the hospital on September 22 for 'fever and dehydration.'

A plain reading of the press release makes clear to even lay persons the seriousness of her condition.

There has been development of an unspecified 'infection', needing 'continued respiratory support, nebulisation, drugs to decongest the lungs, antibiotics, nutrition, general nursing care and supportive therapy' based on 'detailed lab and radiology investigations... continuously carried out by the panel of doctors.'

The anxiety of Apollo Hospitals not to leave any room for blame on any account is evident in the strenuous efforts it is making to show that it is taking no chances and not depending on its own judgment.

Even though it is considered a premier brand institution in its own right, with state-of-the-art equipment and presence of highly qualified in-house medical professionals, it has emphasised in its statement how, not remaining content with the expertise of 'intensivists, cardiologists, respiratory physicians, infectious disease specialists and diabetologists at the hospital,' it had gone to great lengths by invoking the help of a team of doctors, including experts from the All India Institute of Medical Science, New Delhi, and an international specialist, Dr Richard John Beale from the London Bridge Hospital, UK, 'to draw up a detailed medical management plan, keeping in view her known history of diabetes and winter bronchitis in inclement weather.'

The present position emerging from the consensus of opinion of all the experts is that 'the line of treatment given to the chief minister should be continued and she would require a longer stay,' although she is 'improving and making gradual progress.'

An indefinitely prolonged stay in the hospital is unavoidable if anything like a complete recovery before discharge, without a possibility of recurrence, is to be ensured.

In such circumstances, it is certain that Jayalalithaa will be in no position to attend to official business; indeed, doctors would have forbidden anything that would aggravate her condition and lead to complications.

This gives rise to a few legitimate questions:

In the absence of suitable alternative arrangements following the disability of a Constitutional authority like the chief minister to exercise her functions, any other person, even if it be a minister, or official, exercising such functions without due authority can be held to account for patent abuse and misuse of power.

The best way of averting such contretemps is for the chief secretary to bring the chief minister's true state of health formally to the notice of the governor, the Union home secretary and the Cabinet secretary at the Centre, so that the Constitutional requirements for running the government are fully met and all actions taken by the executive have legal sanction.

Actually the governor should not wait to receive such a report, but should himself take the initiative to assess the situation and fulfil his Constitutional obligation in compliance with his solemn and sacred oath 'to preserve, protect and defend the Constitution and the law and to devote himself to the service and well-being of the people of Tamil Nadu.'

He could first informally sound some of the senior ministers about the alternative arrangement and what plans they have for the administration to be carried on smoothly. If he does not receive a satisfactory response, and he finds the things in a state of drift, he should not hesitate to report to the President recommending action under Article 356 of the Constitution.

The Union government too cannot escape or evade its Constitutional responsibility in such a situation. The Constitution squarely places on it the paramount duty to ensure that the government of a state is carried on in accordance with the provisions of the Constitution.

In case there is any lapse or failure on this account, it will be well within its Constitutional mandate under Article 356 to assume to itself all or any of the functions of the state.

The high court of the concerned state, and the Supreme Court, too need to ask themselves whether they can remain mute spectators in the event of occurrence of a Constitutional impasse where the governor and the central government have failed to act as expected of them.

The judges of the high courts and the Supreme Court are bound by the oath they take 'to bear true faith and allegiance to the Constitution of India,' perform duties of their office 'without fear or favour, affection or ill will' and 'uphold the Constitution and the laws.'

These are not meant to be empty or idle words. They, indeed, cast a duty on them to intervene suo motu with appropriate orders to prevent a Constitutional breakdown in time.

Finally, the President. Purists and pundits have cast the Presidency into a gilded cage, treating the post as a sinecure and the occupant a cypher, with no use for the wisdom and record of public service which he brings to it.

By judiciously intervening where and when needed, in a detached and disinterested manner, the President, as the friend, philosopher and guide to his Council of Ministers, Parliament and people at large, can make a difference to the quality of democracy and ensure that the processes of governance proceed along right directions.

The present state of affairs in Tamil Nadu is one such opportunity for him to play that role -- exactly as the framers of the Constitution intended him to.

B S Raghavan is a former civil servant, policy adviser to the UN (FAO) and US Congressional Fellow, besides having been director of political and security policy planning in the Union home ministry, member of the Joint Intelligence Committee, and chief secretary of a state. A family so rich that they didn't know they were being robbed! 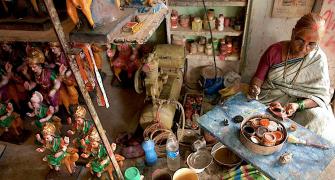