News
Business
Movies
Sports
Cricket
Get Ahead
Money Tips
Shopping
Sign in  |  Create a Rediffmail account
Rediff.com  » News » Who is a terrorist?

Who is a terrorist?

'There is no acceptable definition of what terrorism is and who a terrorist is,' says Aakar Patel.
Illustration: Dominic Xavier/Rediff.com 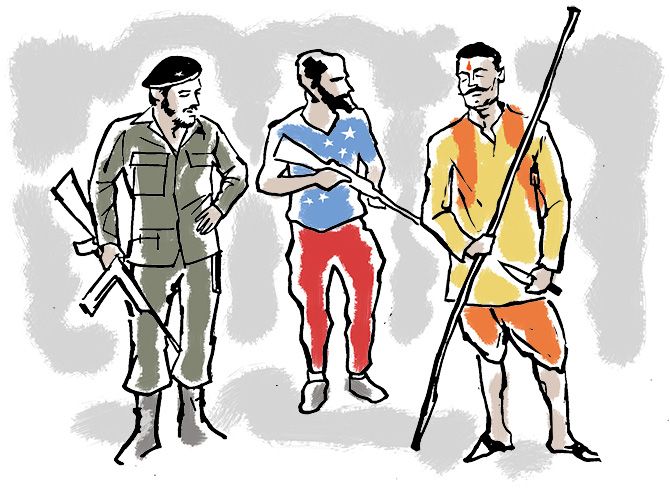 Che Guevara was a cross border terrorist. He was a doctor who is idolised by millions of people around the world today as a revolutionary.

In 1959, Che came to India at the age of 31, met and dined with then prime minister Jawaharlal Nehru at his house in Delhi.

He wrote two works which are regarded as classics, one called The Bolivian Diary and the other called The Motorcycle Diaries (which was made into an award-winning film in 2004).

But Che's fame came out of his desire to use violent means to achieve his aims. Che was Argentinian, but went to Cuba to fight in Fidel Castro's civil war against the government of Batista.

He then went to Bolivia to fight a guerrilla war against the government of Barrientos. Here, according to his own writing, Che and his men ambushed and killed several soldiers.

Che Guevara was captured and executed by the army in October 1967, aged 39.

George Orwell was a cross border terrorist. He was a police officer who was born in Motihari in Bihar. After government service he wrote a series of books that made him one of the most influential writers in history.

His works include 1984 and Animal Farm. The latter book was quoted admiringly by Atal Bihari Vajpayee's government during the Kargil war, when it spoke about Pakistan using 'Orwellian logic'.

Most modern writers become irrelevant with time, but Orwell is one of the few to be admired and emulated decades later.

Orwell had no problem with using violence. He was a British citizen but he went to Spain in 1937 and took part in their civil war against General Franco.

Orwell wrote a book about his experiences, called Homage to Catalonia, in which he says he killed a man by bombing him and he himself was shot through the throat.

Let me now turn to why I have made these references. India's prime minister made a short address before the United general assembly in which he said the following:

'The largest number of supreme sacrifices made by soldiers of any country for UN Peace keeping missions is from India. We belong to a country, that has given the world, not war, but Buddha's message of peace.

'And that is the reason why, our voice against terrorism, to alert the world about this evil, rings with seriousness and the outrage. We believe, that this is one of the biggest challenges, not for any single country, but for the entire world and humanity.

The prime minister is right: There is no unanimity in the world on the issue of terrorism. The question is why.

The answer is that there is no acceptable definition of what terrorism is and who a terrorist is.

India's first anti-terror law, TADA, gifted to India by the Congress, said the following: 'Whoever with intent to overawe the Government as by law established or to strike terror in the people or any section of people or alienate any section of the people or to adversely affect the harmony amongst different sections of the people does any act or thing by using bombs, dynamite or other explosive substances or inflammable substances or firearms or other lethal weapons or poisons or noxious gases or other chemicals or any other substances (whether biological or otherwise) of a hazardous nature in such manner as to cause, or as is likely to cause, death of, or injuries to, any person or persons or damage to, or destruction of property or disruption of any supplies or services essential to the life of the community, commits a terrorist act'.

So India felt that someone who used a bomb and chemical weapons was committing the same offence as someone who destroyed property or disrupted supplies.

Our second anti-terror law, POTA, gifted by the BJP, defined terrorism as any act 'with intent to threaten the unity, integrity, security or sovereignty of India or to strike terror in the people or any section of the people'.

This sort of over-broad and vague definition led to confusion and ensured the lowest conviction rates in the world. TADA's conviction ratio was 1% and POTA's less than 1%.

The focus should have been on sharpening the definition but in India good legislation is not the primary work of legislators.

In India, an attack on unarmed civilians by armed men is terrorism.

An attack by armed men on other armed men is also terrorism.

An attack by militants on a fortified army camp is also terrorism. But then it matters who the attacker is.

A group of people attacking minorities with the intent of terrorising are called rioters or lynchers.

The same crime carried out in the same way will be named two different things. And India is not unique here.

In two instances, in both of which a man with a gun kills dozens of unarmed civilians, America's president will call one a terrorist and another a lone gunman or someone mentally ill, depending on which religion the gunman belongs to.

In the definition used by India today, Che and Orwell are terrorists. But Bhagat Singh, who killed a police officer and bombed the Delhi assembly, is a martyr.

If the world is not unanimous in accepting what terrorism is and who a terrorist is, India has also contributed to the confusion. 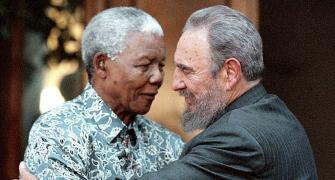 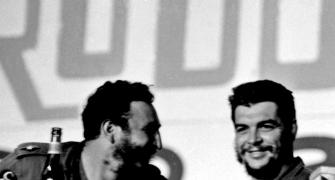 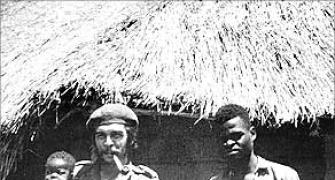 A meeting with Che Guevara 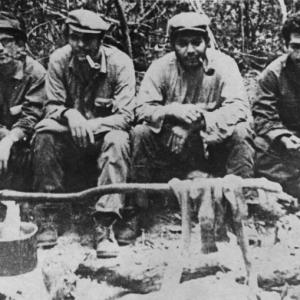 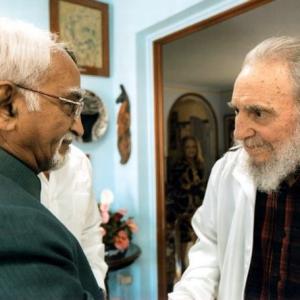