'Castro's huge appeal lies in the fact that he stood up to the Americans.'
'However, it becomes difficult to be judgmental about his legacy, because there are huge uncertainties about the future of the Cuba that he built,' says Ambassador M K Bhadrakumar. 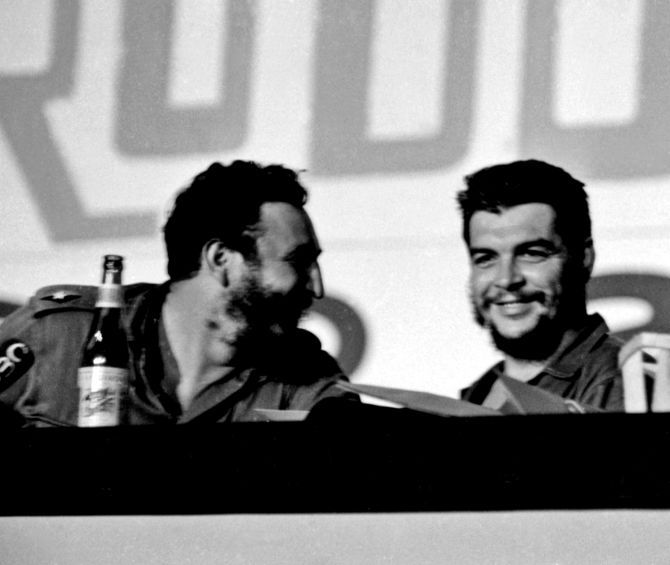 I have been under immense pressure to keep a timeline from the editor to write an obituary on Fidel Castro, whom I have adored ever since my college days in the tumultuous sixties when he walked into the life and times of our generation in Kerala.

There was a 'writer's block,' as it were.

It was simply difficult to write, sitting in Kerala, with such a sense of numbness in the mind, watching the television pictures and listening to the accounts of the bullet-ridden bodies of two 'Maovaadis,' shot down by the police in cold blood.

Those were haunting images. The incident took place on November 24 in the Nilambur forests of the northern district of Malappuram.

Fidel's passing away within a day or two of the cold-blooded killing in Kerala took the mind back to another painful memory of the youth, stacked away carefully in the attic of the mind -- another 'encounter' resulting in the death of Che Guevara, the icon of our youth, in the vastness of the Bolivian forests in 1967.

Che was shot 9 times -- five times in the legs, once in the right shoulder and arm, and once in the chest and throat.

But according to media reports, one of the Maovaadis, Ajitha (46), was shot 19 times, while seven bullets were recovered from the dead body of the other person Kuppuswamy (61) who was a Central Committee member of the Maovaadis pantheon.

The forensic experts reportedly found that Ajitha's organs, including lungs, were shredded to pieces. 13 bullets had apparently pierced her body.

Che too was a 'misguided' Communist. He too was shot, although unarmed and in captivity already, by the death squad of the Bolivian dictator Rene Barrientos.

Herein lies the cardinal difference -- Kerala has a Communist government. Chief Minister Pinarayi Vijayan has therefore done the right thing by ordering a 'magisterial inquiry' into the killing.

The Maovaadis were born as mainstream Communists ,but left the fold for 'new battlefronts under other skies,' as Che once wrote in his farewell letter to Fidel on April 1, 1965, as he took leave of Havana, after formally resigning his positions in the leadership of the Cuban Communist Party, his post as minister in the government, his rank of commander and even his Cuban citizenship.

Two years ago, while sitting and brooding on a bench in a desolate ill-kept garden full of wild shrubs surrounding the obscure villa in Mexico City where Leon Trotsky had lived out the final years of his life in exile before the brutal assassination in 1940 at the hands of an axe-wielding Spanish Communist (and probable agent of Josef Stalin), the very same ineffably painful thought had occurred to me -- why the parting of ways between Communists becomes so painful to watch.

Che's letter is an infinitely sad one. Many versions are available even today why Che took leave of Fidel and Havana -- or, put differently, why Fidel let him go, and why he didn't order the rescue team that was kept in readiness to mount the mission when news trickled in about Che's capture in an ambush.

Che's letter gives a vague hint, perhaps, of the crux of the matter when he juxtaposed in a subtle way -- himself answering the call of the revolution and discharging 'the responsibility of being a Cuban revolutionary' with Fidel's responsibility as the head of Cuba; the surge of his feeling of 'fulfilling the most sacred of duties: to fight against imperialism wherever it may be' with Fidel's practical commitments as the father figure of the Cuban nation.

Che's expertise in guerrilla war had proved decisive in the repeated successes that Castro's army won in battle after battle against Cuba's dictatorial regime under Fulgencio Batista in the 1950s.

But then, Che also had a habit of ordering prisoners executed without trial and could be merciless toward adversaries and enemies.

On the other hand, the poverty and social injustices Che witnessed sparked his radical beliefs, as the notes testify from his odyssey when he took a pause from medical studies in 1952 to travel through South America with a friend on a motorcycle -- notes which eventually turned into his memoir The Motorcycle Diaries.

In the 1960s, Castro broke with other Latin American leftists by actively promoting revolution across the continent. He was young, seductively attractive, and very charismatic and refreshing.

Guerilla movements were soon flourishing all over Latin America.

The peak came in 1979 when the Sandinistas came to power in Nicaragua through revolution. But that turned out to be a flash in the pan, and in the coming years, Cuban revolution began losing appeal when it transpired that the huge Soviet subsidies only had kept the country's economy floating without which the social sectors wouldn't be affordable.

Of course, once the Cold War ended and the Soviet Union was disbanded and the subsidies were long gone, Cuba's economic and social model came under critical scrutiny as a role model for other countries.

Nonetheless, Castro has remained an inspiration and is a highly respected figure all across Latin America -- except that it is in a new modern context.

What did I notice two years ago while visiting Latin America, during my conversations with Communist activists drawn from all over the continent?

Succinctly put, Castro's appeal to young Latin American leftists today is different now than it was in the 1960s and 1970s.

To be sure, Castro had become an iconic figure over the decades. For the Latin Americans, though, he symbolised a figure mostly of Latin American nationalism and anti-Americanism. The youth adored him for that.

Of course, everyone I met knew Castro was not a quintessential revolutionary. They also were profoundly sceptical whether the Cuban experience would survive, but they still simply could not bring themselves to imagine they could ever even think of Havana having a regime other than the one it had.

To my mind, Castro's huge appeal in Latin America and elsewhere in the world ultimately lies in the fact that he stood up to the Americans.

This appeal continues, since the image of the United States has suffered in Latin America and in other parts of the world in the recent decade.

However, looking ahead beyond that, it becomes difficult to be judgmental about Castro's legacy at this point in time, because there are huge uncertainties about the future of the Cuba that he built.

Fidel's prestige may well wax and wane in the coming years. Mahatma Gandhi and Nelson Mandela have been fortunate in that respect, since they are not held accountable as nation-builders, as their final legacy is recounted.

Che's legacy, on the contrary, since his murder in 1967, has continued to grow to mythical proportions.

One difference could be that Fidel staked out the nationalistic arena while Che sought an internationalist role -- as someone put it, Che was the Argentine who became Cuban, then a Latin American and, finally, the idol and poster boy of youth everywhere -- his spectacular failure to export permanent revolution notwithstanding.

Fidel will eventually be judged by the yardstick of the success of the Cuban system, one of the handful of Socialist pockets remaining on the planet, and the odds are heavily stacked against the survival of the House that he built.

Most certainly, Fidel has chosen the wrong time to leave us -- just as Donald Trump came trooping in.

On the other hand, Che, although a more brilliant Marxist-Leninist than Castro himself, has evolved into a ubiquitous symbol of counterculture worldwide, recognisable and influential as several different entities, and a global emblem.

How far Che inspired the two Mao<em<vaadis in the Nilambur forests we may never get to know, but the possibility cannot be ruled out. 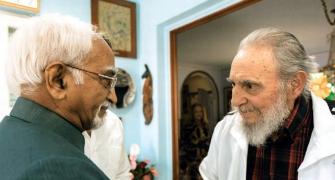 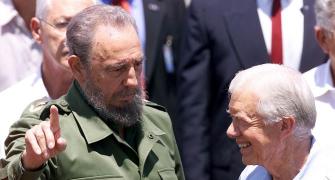 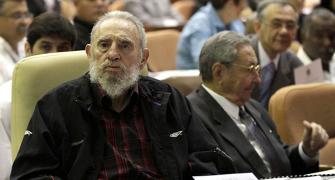 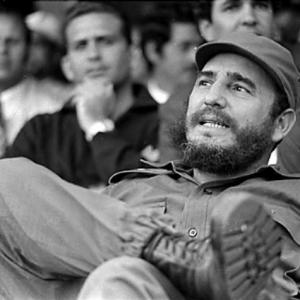 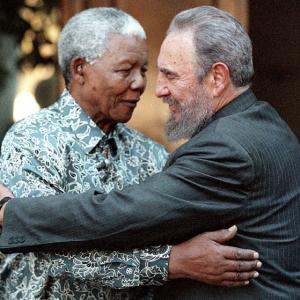