Such is the force of his oratory that many Muslims, even those who don't vote for him, have come to believe that Asaduddin Owaisi is the first and only politician who speaks up for Muslims since Independence, observes Jyoti Punwani. 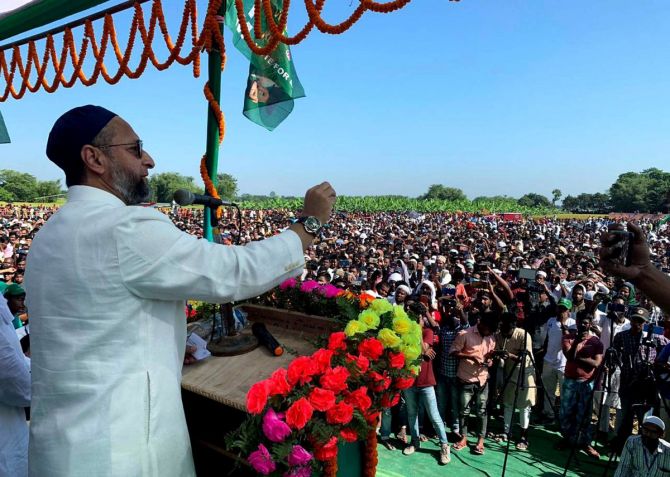 It was not because Seemanchal was a Muslim-dominated region that he chose it, Asaduddin Owaisi asserted in interviews during the Bihar assembly election campaign, where he won an impressive five seats out of the 21 he contested.

He chose it because, claimed the AIMIM chief, it was the most backward region in the country. Hindus, Muslims, Dalits, Adivasis all lived in Seemanchal, he pointed out.

However, there was little for these other communities to identify with in the AIMIM chief's campaign speeches.

When he addressed rallies, Owaisi came across clearly as a Muslim leader speaking exclusively to Muslims.

Asking his audience to give his party a chance, the AIMIM chief told them, 'You stood by Lalu for 15 years, by Nitish for 15 years. Won't you stand by this hare jhande ki jamaat (community which holds the green flag) for five years?'

Not only did he describe himself as one unafraid of anyone except Allah, Owaisi also exhorted his audience to elect AIMIM candidates because they would not be afraid of anyone but Allah.

'He whom Allah bestows with success, can never be destroyed by any power (Jisko Allah kaamyaab karega, usko koi taakat nahin mita sakti),' he asserted.

Referring to six-time Congress MLA Abdul Jalil Mastan's threat that he would break Owaisi's teeth and send him to Hyderabad, Owaisi replied in his speech: 'Does Mastan think I'm afraid of dying? He should know that when death comes, what will emerge from my lips will be the Kalma.' And then he went on to recite it. 'La Illah Il Allah Mohammed Rasool Allah,' he intoned, sending the audience to a frenzy.

Mastan lost to the AIMIM's Akhtarul Iman by 52,515 votes, the second highest margin in the state.

Lashing out at the Congress and RJD for getting Muslim votes by invoking the spectre of the BJP, Owaisi again and again exhorted his audiences to shed their fear.

'If a community is alive, it must give proof of its existence. (Jo kaum zinda hai, use apne zindagi ka sabut dena padega). I want to produce an attitude in you that will enable you to look boldly (seena taan ke) at the zaalims (oppressors) sitting in Patna and demand your rights.'

Interestingly, this very argument was heard during the 2014 Lok Sabha election campaign, only to disappear very soon.

In 2014, young Muslims rooting for Arvind Kejriwal's Aam Aadmi Party would tell their elders to come out of the trap of the Congress and other 'secular' parties, which invoked the fear of the BJP to get the Muslim vote.

By 2017, three years of Modi rule had put paid to this argument.

However, in his Bihar campaign speeches, Owaisi did not inculcate courage in his Muslim audience by pointing out that they were equal citizens with equal rights, and they had no need to be beholden to so-called secular parties or fear the BJP.

He asserted that Muslims had to be rulers (maalik), not slaves of any party, but did so by appealing to their religion.

Reminding them that the azaan was said in their ear when they were born, he exhorted them to 'go to vote like wounded lions and lionesses, (for) until now, we have been hunted, now we will hunt, Inshaallah.'

'Go boldly,' he told them, 'remember Nabi-e-Karim (Prophet Mohammed) and press the button for the kite (the AIMIM symbol).'

Owaisi repeatedly gave his own example. 'In front of 302 MPs of Modi and 15 MPs of JD-U, your brother Asaduddin Owaisi with a topi on his head and a beard stands up and talks of justice for the oppressed.'

His MLAs had the same attitude, he claimed. In fact, he asserted, 'Every member of the MIM was afraid of no one but Allah (Majlis ka ek ek rukun sirf Allah se darta hai, aur hum kisi se nahin dartey, na kabhi darengey, Inshaallah).' 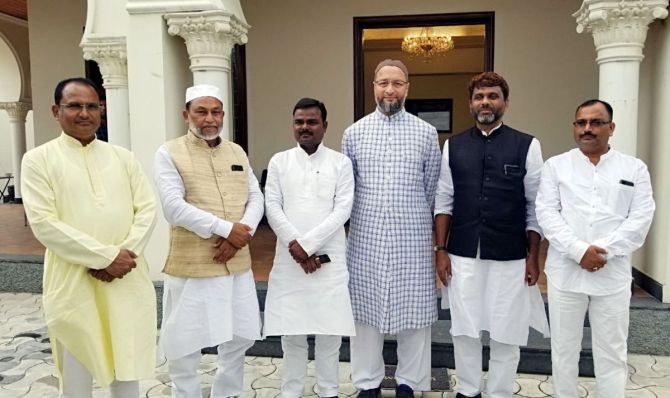 Owaisi has always countered the allegation that he runs communal campaigns by pointing out that the Election Commission would have pulled him up had he done that.

His faith in the EC is touching indeed, given that even Shiv Sena chief Bal Thackeray was never pulled up for his election speeches by the EC, despite complaints.

How does one define a communal campaign? Does it only mean one that invokes enmity for other communities/castes?

Owaisi did point out to his audiences that though his 'Yadav brothers' were only 14% of Bihar's population, they had 57 MLAs, but Muslims, despite being 17% of the state's population, had only 23 MLAs.

But that could at the most arouse resentment in his audience, if that.

But would a campaign where the speaker appeals to voters by invoking their religious identity, which s/he shares with them, also be considered communal?

Or is it just part of identity politics, which is always exclusive?

When Owaisi told his audiences that 'you poor people of Seemanchal' had been treated like lesser beings and denied justice, at the same time making constant references to their religious identity, was he insinuating that Seemanchal was neglected because mostly Muslims lived there? Was he arousing their anger against this neglect as Seemanchal residents or as Muslims?

There is, of course,, no getting away from the fact that Muslim-majority Seemanchal has among the lowest indicators in Bihar. Indeed, even the country's most backward district (according to the Niti Aayog), Nuh, in Haryana's Mewat region, is a Muslim-majority district.

But among the most backward districts are also tribal districts.

Owaisi's Bihar speeches reminded one of the AIMIM campaign in Maharashtra's 2014 assembly election campaign, where the Owaisi brothers -- Asaduddin and Akbaruddin -- made emotionally charged speeches, appealing to Muslims as Muslims. The party won two seats.

But the AIMIM chief's tone changed when he contested the Lok Sabha election in Maharashtra last year in alliance with Prakash Ambedkar, winning one seat. The invocations to Allah were accompanied by references to 'Dr Babasaheb Ambedkar's Constitution'.

In Bihar, Owaisi had no such compulsion.

Owaisi now credits his success to the fact that he alone raised the issue of CAA-NRC as an an election plank, while the Mahagatbandhan was afraid to speak on the issue.

That is not true.

CPI(ML) candidates, part of the Mahagatbandhan, brought up the CAA-NRC in their election campaigns, and ended up winning 12 of the 19 seats they contested. In fact, four-term CPI(ML) MLA Mehboob Alam won with the highest margin in the state.

Owaisi also claimed in his speeches (as he did in Maharashtra last year) that he alone spoke up against the CAA in Parliament, tearing the Bill, 'like Mahatma Gandhi had torn up the registration certificate for Indians in South Africa'. (Gandhi had led a crowd of 2,000 protesters in burning the certificates.)

That claim too is false. Many Opposition leaders spoke in Parliament against the CAA, including those from the Congress.

But such is the force of his oratory that many Muslims, even those who don't vote for him, have come to believe that Asaduddin Owaisi is the first and only politician who speaks up for Muslims since Independence.

In perpetrating this falsehood, Owaisi has succeeded in implanting the idea among a section of Muslims that only a Muslim leader and a Muslim party can speak up for them and give them representation in elected bodies proportionate to their population.

What could please the RSS more than this concept? Separate blocs: Hindu voters for whom Modi speaks, Muslim voters for whom Owaisi speaks, and 'secular; parties claiming to speak for all, consigned to history.

In all this, however, is this silver lining.

Not all Owaisi's passionate appeals to Muslim identity could get the only AIMIM MLA in Bihar re-elected. Qamrul Huda had been elected in October last; in just over a year, his performance left voters disillusioned. He trailed at third place; the Congress's Ijaharul Husain won.

Identity politics, perhaps, can go only so far.