'The government may backpedal for now to stave off bad international press and diplomatic demarches, but that it will go ahead with putting religion at the centre of citizenship rules is certain.'
'For it is convinced that this is the magic bullet that will ensure its return to power in 2024,' says Saisuresh Sivaswamy. 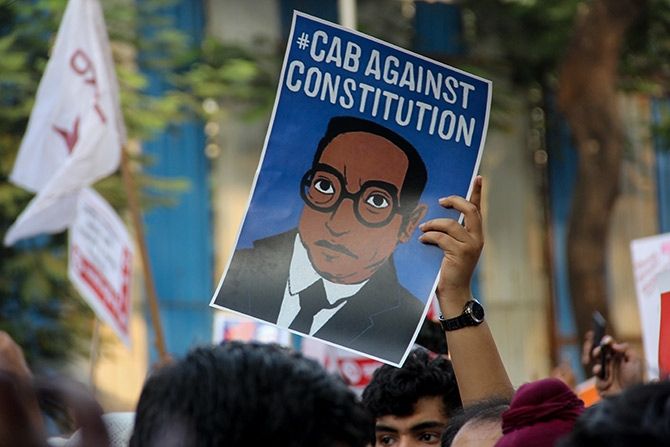 IMAGE: A protest against the Citizenship (Amendment) Act at the historic August Kranti Maidan in Mumbai, December 19, 2019. Photograph: Uttam Ghosh/Rediff.com

Oh, how different India's midnight tryst with destiny would have turned out if only some things had been done, or done on time, or remained undone.

The list, and personalities found wanting at a crucial turn in the nation’s progress, is endless and too well-known to bear repetition.

We know of so many things that ought to have been done and which were either not done or done so belatedly as to rob them of their efficacy.

We know of things that ought not to have been done but were nevertheless done with a total lack of vision, for which the nation continues to pay the price.

But no error of commission or omission from the past compares to the deliberate introduction of a legislation and population enumeration measure that drive a wedge through the very heart of India by the Narendra Damodardas Modi government -- barring perhaps Indira Gandhi's imposition of Emergency in 1975 and the draconian curtailing of civil rights in the country for opposing which, ironically, many of his party's stalwarts were imprisoned.

Today, the very same party sees nothing wrong in deciding religion as a criterion for citizenship, a concept that militates not only against India's Constitution, but against the land's very ethos -- something the Sangh Parivar would tell you day in and day out that they are steeped in.

It is a fact that the Sangh Parivar and its offshoots were bystanders -- some say worse -- in the nation's freedom struggle so possibly their knowledge of the dark days surrounding the liberation of India from the foreign yoke could be different.

Standing by the railroad doesn't offer you a vision of either the carriage's insides or the destination, but only of fast-turning wheels and the carriages zipping past.

Today, having come to occupy the motorman's cabin, its leaders now tell an astounded nation, mid-journey, that not only was the destination wrongly plotted (by one man, no prizes for guessing who) but even the cost of admittance on the train was wrongly fixed, no doubt by their sole bugbear.

If the Sangh Parivar and its offshoots had participated in the freedom struggle, they would have realised that the question of India's nationhood was decided and sealed 72 years ago. India was not to be a mirror image of Pakistan which chose religion as its raison d'etre.

A nation of 80 per cent Hindus refused to become a Hindu rashtra not because it was the fashionable thing to do or that Jawaharlal Nehru wanted it that way. In deciding to remain a nation for all religions, India simply chose to be tethered to its civilisational moorings.

A land that had over aeons welcomed one and all cannot overnight shut its door to some. It is this trait, and not mere words added to the Constitution's Preamble in 1976, that makes India what it is -- a secular nation.

And it is this ancient spirit, the quintessence of India, that is being slow-poisoned by the election-winning Wehrmacht that rules India today.

The Constitution of India has always been a finger in the Bharatiya Janata Party's eye. In its very first iteration, the National Democratic Alliance government of Atal Bihari Vajpayee had even set up a committee to examine whether India should switch over to the presidential form of government, but thankfully matters did not proceed beyond that.

Would Vajpayee, as steeped in the Sangh Parivar culture as is the second prime minister from the BJP, have gone further with his Constitutional adventurism had he presided over a full majority government and not one dependent on allies? My guess is yes.

Clearly, the fact that he has done what few prime ministers have done before him -- winning a second term in office -- has emboldened Modi to strike out on his own, remake India in his own vision. He and his Sancho Panza of a home minister have managed to successfully sell to a critical mass the notion that India's founding fathers -- no, not the entire lot, only Nehru -- had erred.

A sample: Why is India still poor? Because of Nehruvian socialism.

Why is Kashmir burning? Because Nehru messed up.

How did China defeat us? Because Nehru failed.

How are Muslims allowed to have four wives? Because Nehru did not want a Uniform Civil Code.

Why is Hinduism not respected in India? Because of Nehru's secularism.

Having successfully sold half-truths and lies as facts, Modi the Undoer of Historical Wrongs is here promising deliverance to his throng of ecstatic followers.

Thankfully the Nays have it, if not in Parliament then at least in the ballot boxes.

In the Lok Sabha election held last year, the Modi government won a second term bagging 303 seats and 37.76% of the vote. In other words, 62.74% of Indian voters did not agree with his government's agenda.

The 303 seats were enough to see the Citizenship (Amendment) Bill become law in Parliament; but it is the second number, 62.74% of non-voters, that is reverberating across the nation's streets against the CAA-NRC-NPR misadventure.

So did Modi miscalculate on the citizenship Act?

No, this was always the blueprint before him for his second term in office.

Because, his cupboard of achievements is bare, there is hardly anything in it that will guarantee a third term.

Of the BJP's three core issues, Ayodhya and Kashmir have been 'resolved' and the Uniform Civil Code is only a matter of timing. But all three cannot guarantee a municipal election, leave alone national.

The economy, whose turnaround was the grand promise of Modi I, lies in tatters and all the king's horses and all the king's men don't have a clue on how to put it together. It is a classic case of taking an aspirational India and asking its youth to start pakoda stalls.

So, there is nothing on the positive side for the government to take to the people.

When all else fails, divide.

It is a grim reflection that stares back at India in 2020. With the economy tanking, forget the multi-trillion dollar superpower status, there will be no jobs for our fresh graduates, agriculture remains unremunerative, and without jobs our vaunted demographic dividend will soon become a millstone around India’s neck.

Ancient Rome needs to be lauded for giving us the republic, but what happens when the republic falters? So it also gave us the gladiatorial circus to distract attention.

As the Indian dream turns hazy, we too are seeing the grand circus play out -- on the streets, on social media, and in TV studios.

Never has India been so divided, so polarised.

But what happens when an unstoppable force meets an immovable object?

The popular paradox does not have a satisfactory answer, and neither does the present stalemate have a foreseeable outcome.

The government may backpedal for now to stave off bad international press and diplomatic demarches, but that it will go ahead with putting religion at the centre of citizenship rules is certain.

For it is convinced that this is the magic bullet that will ensure its return to power in 2024. It knows that the 62.74% voters against it will never vote as one in the elections.

It is also a given that the protests against the measure won't recede. It is a fight that will only end at the hustings five years hence.

The Supreme Court of India with its brief to defend the Constitution against the Executive and Legislature's excess, stands out like a beacon of hope, but there have been nights so dark that its light too was clouded out.

Alas, at times such as these, what is needed at the wheel is a steady pair of hands with 20:20 vision, not myopia and a forked tongue.

Saisuresh Sivaswamy has been a journalist for 35 years and wrote his very first column for Rediff.com on January 25, 1997. You can read his columns here.
You can mail him at sai@rediff.co.in.