'A clear pattern is emerging in that most of those who we met are saying that their IDs have been burnt or stolen.'
'I clearly sense a pattern here.'
'It's not a very normal occurrence to happen during the riots.' IMAGE: A shopkeeper sorts through the charred remains of a vandalised and burnt shop at Khajuri Khas, northeast Delhi. Photograph: Manvender Vashist/PTI Photo

"This is altogether a different pattern in the way the rioters seem to have targetted people in Delhi," says Tanvi, a Delhi-based lawyer, who along with similar-minded lawyer colleagues have used social media extensively to crowd-source help in providing legal aid to those who need it urgently in the aftermath of the Delhi riots.

When Tanvi (@abouttanvi) tweeted seeking volunteers to reach out to Delhi's riot victims, she was overwhelmed with the response.

Now, not only is she and Citizens Collective for Peace helping the riot-affected file FIRs and compensation forms at the sub-divisional magistrate's office, but have also provided volunteers to the SDM to cope with the pressure.

"Muslim shops in non-Muslim areas have been selectively burnt down even as other shops around these burnt ones have not suffered any damage," Tanvi tells Rediff.com's Prasanna D Zore.

How did this idea of legal aid camps come up? And why did you think of reaching out to people on Twitter?

One of our lawyer colleague, Mishika Singh, is running a campaign 'lawyers for detainees' since December to provide legal aid to all those who have been arrested during the anti-CAA, anti-NRC protests in Delhi.

On similar lines we have started this legal aid camp for the riot-affected of northeast Delhi. We are a group of lawyers, about a hundred people, running legal aid camps for the past one week. It is a collective idea.

The riot-affected people of Delhi, because of whatever happened to them, require immediate attention and relief.

Initially, there was confusion if the (Delhi) government will set up camps and now that they (the camps) have come up in Delhi, our priority is to provide legal aid to those who are finding it difficult to file complaints or need help with relief and rehabilitation.

Since we needed volunteers who could coordinate with the riot-affected people and law enforcing agencies, we came up with a three-page announcement explaining the work we were doing and the kind of volunteers we needed.

Since an individual cannot possibly to do all this alone, we decided to collaborate with other similar-minded individuals and groups.

We were looking forward to meet lawyers, non-lawyers, professionals, general public so that they can reach to the camps and contribute in their capacity as volunteers. 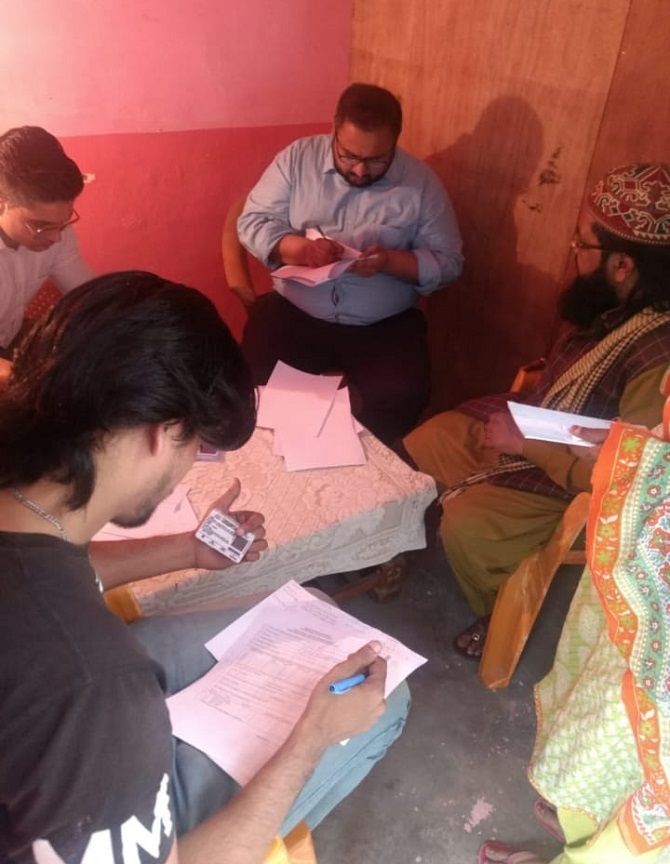 What is the response? How many people have volunteered?

I can't keep any count right now because I am receiving calls for everything. Random picking up (arrests/detentions) of people from different areas is going on.

There were 18, 19 detentions in Jagatpuri thana of Khureji area. Four of us lawyers went to the thana and we got them out; there was a minor too among those detainees.

It all started from there. And then we realised that we need more people who could help these people with all the legal hassles they are going through after their homes and lives have been shattered.

So we thought of making this a collaborative effort.

How many riot-affected people have approached you after you started this initiative?

Till yesterday (March 4) evening, the count was almost 500.

Now we are also collaborating with the SDM's office because they asked us if we could pitch in so we have send our volunteers there too. This will help in proper coordination between the riot-affected people on the ground and the SDM's office.

I got around 1,500 responses (from volunteers after the announcement on social media) which was unbelievable. 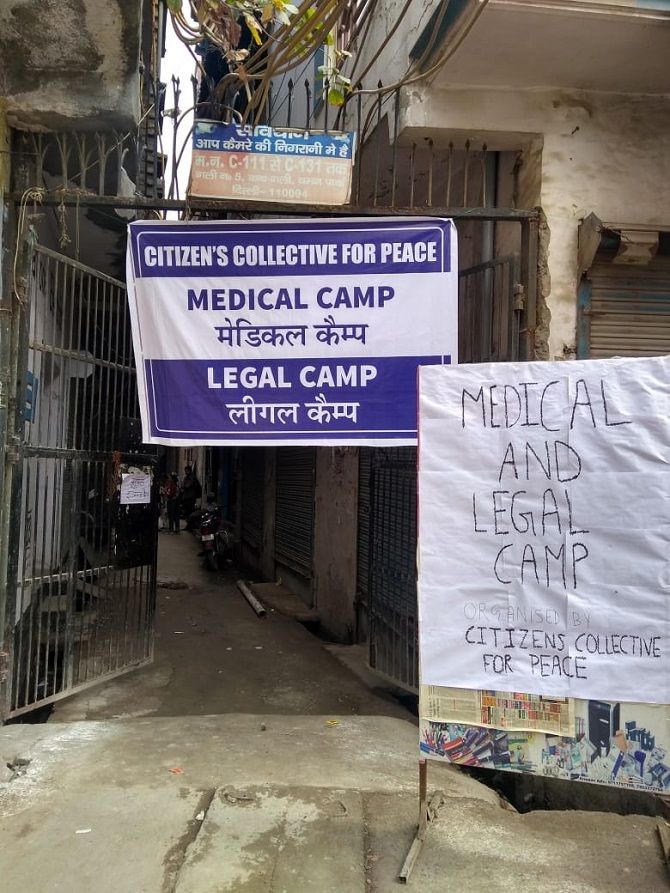 IMAGE: A legal and medical camp set up in one of the affected areas of Delhi. Photograph: Tanvi

Would the 500 riot-affected people be only Hindus, Muslims or a mix of both?

I have written around seven to 10 complaints until now including the ones at the two camps and individually. None among these was Hindu.

What kind of damage to their homes and lives have these people suffered?

A majority of them have suffered huge property losses as their homes were burnt and more specifically a clear pattern is emerging in that most of those who we met and are helping in our legal aid camps are saying that their IDs have been burnt or stolen.

This is altogether a different pattern in the way the rioters seem to have targetted these people in Delhi.

Out of the 10 families we have met till now only two said they have their proofs and IDs safe.

I clearly sense a pattern here in that it looks like IDs of these people have been deliberately targetted. It's not a very normal occurrence to happen during the riots.

The other thing, and this has happened before, is that Muslim shops in non-Muslim areas too have been selectively burnt down even as other shops around these burnt ones have not suffered any damage.

Are you going to set up legal aid camps for Hindu families who have also suffered in the riots?

Right now we haven't, but soon we plan to help all riot-affected people.

What kind of challenges are you facing right now in helping the riot affected? Is the police being cooperative while filing FIRs?

There was this one person whose complaint we were trying to get registered and he told us that he has been visiting the local police thana since February 26.

The other day he came to seek our help and his complaint was only registered when a few of us lawyers accompanied him to the police station.

There is an urgent need to accompany the riot affected whose complaints have not yet been registered at local police stations.

It's not about Muslims. I can't say that only one community is being treated this way, but then the police is not too keen in registering their complaints or lodging FIRs.

There is pressure on the police when lawyers accompany these people to register their complaints.

What kind of horror stories do you come across when these riot-affected people talk to you?

Right now, the most moving horror story is that they have lost everything.

Those who had houses have lost them in the arson. Their rations, clothing, money, all has been either burnt or stolen.

There was this one family which had prepared for their brother's wedding. They lost their clothes, IDs, books, everything.

There are these 35 families from Khajuri area who are surviving with the clothes they were wearing that day (when their houses were burnt down).

Four days later they are still wearing the same clothes; taking shelter at anybody's house who welcomes them or staying at relief camps.

They had to escape the rioters and they ran out of their homes with just their clothes on and took refuge in random Muslim houses.

Now that the rioting has subsided, do these people feel safe to return to their houses?

A mother from one family had gone yesterday to see if she could salvage something from her house. When she came back, she had her hands and face covered with soot deposited from hours of sifting through what was left of her house or her belongings.

If we talk about neighbours and neighbourhoods then there is nothing much left about these things.

As of now, they all are hoping for tensions to cool down further before going back to their homes. Till then they say they would rather stay at some other place.

Many people have moved to Old Delhi because there is nothing left of their houses to go back to. 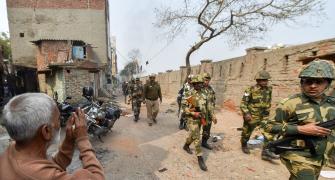 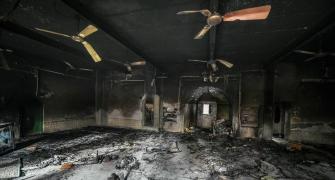 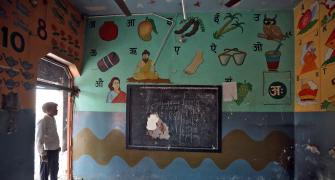