Whenever they are announced, the bypolls to 20 assembly seats in Tamil Nadu will be a mini referendum on the state government’s performance.

It will also be a do-or-die battle for the ruling AIADMK, opposition DMK, as well as the rebel AMMK, says N Sathiya Moorthy. 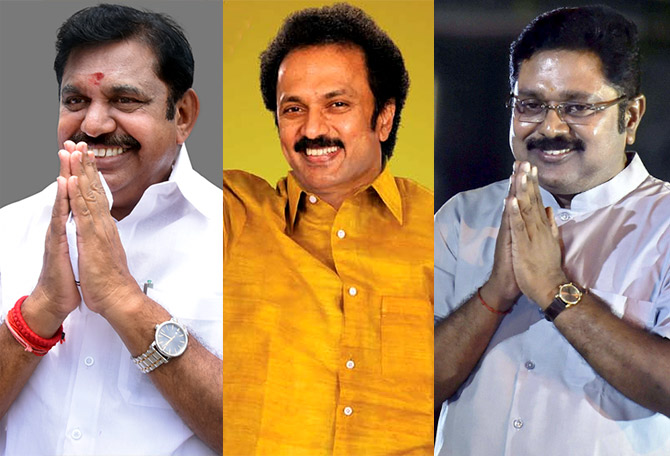 With the 18 ‘disqualified’ MLAs belonging to the ruling AIADMK but identifying with breakaway AMMK of T T V Dhinakaran declaring that they were challenging the Madras high court verdict in the Supreme Court, political parties in Tamil Nadu are bracing up for by-elections in all these constituencies.

Already, two vacancies existed for the Tiruvarur and Tirupparankundram seats following the death of DMK supremo M Karunanidhi and AIADMK’s A K Bose, with the result that the by-elections to an unprecedented 20 of 234 seats in the state assembly have acquired the status of a ‘mini-general elections’, and along with that a ‘referendum’ on the AIADMK government of Chief Minister Edappadi K Palaniswami (EPS).

The question is, when will the by-elections be held -- with the parliamentary polls due by May 2018, or earlier?

At least in the case of the ‘death vacancies’, the six-month gap might have ended if the Lok Sabha polls in the state is slated only for May. Of course, the law empowers the Election Commission to delay by-polls if any larger election was due so that the results of the one does not influence the voter in the other.

Even without it, technically the EC will have to wait until the period of limitation available to the disqualified MLAs to file appeals in the Supreme Court, and cannot be expected to take their public statements as true intention.

Already, the EC got caught in an avoidable controversy when it postponed the by-elections for the Tiruvarur and Tirupparankundram seats, based on a letter from the state chief secretary Girijia Vaidhyanathan that it was north-east monsoon time when election-related work would be affected.

The Opposition parties lost no time in charging the ruling AIADMK in the state and the BJP at the Centre, saying that the two had politicised even the Election Commission and the meteorological department. As they pointed out, when state assembly polls in Telangana could be held in the midst of very same monsoon, why delay only two-seat by-polls in Tamil Nadu!

Coming as it did after the unprecedented rains and destruction in neighbouring Kerala, the EC’s decision was taken well by the TN voters at the time. However, with the simultaneous ‘red alert’ issued by the nation’s weatherman for Chennai City and the rest of the state coming a cropper that very weekend, no one was impressed by any of the allied decisions.

Now, independent of polling day announcement, all major political parties in the state have commenced preparations for the 20 assembly seats along with those for the 39 Lok Sabha seats.  The ruling AIADMK is more visible and is also seen as being more proactive than the other two, namely, the Opposition DMK under M K Stalin and Dhinakaran’s AMMK.

The three parties, which are the main players in the fray, have three distinct styles of campaigning. The DMK has traditionally left poll campaign to local-level leaders and cadres, with the top leadership giving broad guidelines, addressing poll rallies and patching up factionalism at lower-levels.

The AIADMK, especially under late Chief Minister Jayalalithaa, had developed a scheme of putting individual ministers or ex-ministers in charge of campaign in individual areas in individual constituencies. They invariably take houses on lease in the area, reside there and run the party’s campaign for a month and more, ahead of polling day.

Dhinakaran, under his late maternal uncle M Natarajan, husband of jailed Jayalalithaa aide V K Sasikala, had developed a hybrid campaign style. In this case, the ‘campaign managers’ in a given constituency are all loyal outsiders, ensuring that factionalism in the constituencies did not impact the result. Dhinakaran’s massive by-poll victory in Jayalalithaa’s R K Nagar constituency owed to such a style of operations.

Like the AIADMK ministers, Dhinakaran’s men would camp in the constituency concerned for months, before drawing up the campaign style.

However, the DMK, in the last five years or so, has been relatively stingy in opening up its purse-strings. According to party cadres, this was a major reason for its candidate losing his security deposit in R K Nagar. Now, cadres are said to be impressing upon Stalin to go beyond his ‘principled’ campaign style of R K Nagar.

It is a do-or-die by-polls for all three main contenders, though they too have little known allies, or even better-known allies like the Congress and the two communist parties in DMK’s company, but with little electoral value. But the DMK cannot afford to antagonise the Congress in particular because of prevailing public perception that the ‘minority votes’ would get divided if the two parted company.

For the AMMK, fielding the ‘disqualified’ MLAs in those 18 seats is an easy decision and it needs to look for new faces only in Tiruvarur and Tirupparankundram. The AIADMK has a problem on hand, as these 18 became MLAs under its flag and symbol, and losing them means that they would have to look for new candidates in all 20 constituencies, so to say.

The DMK is likely to consider the ‘losing’ candidates in 19 of the 20 constituencies, except in Tiruvarur where Karunanidhi scored the highest margin of 65,000 votes in election 2016. Though no one is talking about the new DMK candidate matching that figure, they would want to win, and win with a decent margin. 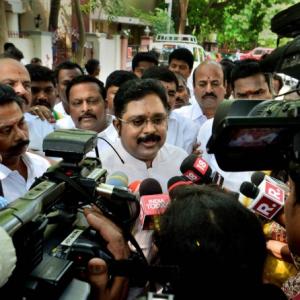 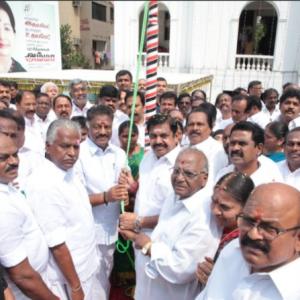