Every vote now counts in the Tamil Nadu assembly, as the ruling party is walking on a wafer-thin majority.

The Opposition DMK-led combine has 98 MLAs on their side, and with four others who had won on the AIADMK’s ‘Two Leaves’ symbol in 2016 but do not belong to the party, per se, playing hide-and-seek with the party leadership, Dhinakaran with two or three other MLAs can give sleepless nights for the ruling party than what their post-verdict celebrations may indicate, says N Sathiya Moorthy. With Justice M Sathyanarayanan of the Madras high court upholding Tamil Nadu assembly speaker P Dhanapal’s ‘disqualification’ of 18 ‘rebel’ MLAs belonging to the ruling AIADMK, by-elections seem to be staring at the constituencies that they represented in the 234-member house.

If it came to that, it is not unlikely that the Election Commission may decide to hold the by-polls along with the Lok Sabha elections that are due by mid-May -- but multiple issues remain, beforehand.

For starters, the seats of all 18 MLAs identified with rebel AIADMK, calling itself the Amma Makkal Munnetra Kazhagam (AMMK), under jailed Jayalalithaa aide V K Sasikala Natarajan and her legislator-nephew T T V Dhinakaran, were declared vacant long ago.

For another, it remains to be seen if they would risk appealing to the Supreme Court, which customarily may order the status quo, even if accepting their petition for full hearing. This means that the SC may choose not to stay the ‘vacancy’ status as the high court had done while accepting their petitions against the speaker’s order.

The Sathyanarayanan verdict is a rare one in the Madras high court’s history. He is the third judge to hear the case and was named by the Supreme Court after a two-judge bench, comprising then Chief Justice Indra Banerjee and Justice S Sundar, gave a split verdict.

With Thursday’s HC verdict, the total number of vacancies in the state assembly has gone up to 20, unless the SC is approached and it interferes in favour of those disqualified -- whether in the interim or the final. Already, two vacancies exist, caused by the death of DMK’s former chief minister M Karunanidhi (Tiruvarur) and AIADMK legislator A K Bose (Thirupparankundram), both in southern Tamil Nadu, from where many of the ‘disqualified’ MLAs hail.

The elections are not possibly expected before the year is out. There is a specific reason for it. When it came to holding the Tiruvarur and the Thirupparankundram by-polls, the EC went by the written advice of state chief secretary, Girija Vaidhyanathan, that it being the north-east monsoon season, heavy rains could disrupt the electoral processes. With the result, the EC said it could not hold the by-polls along with the five-state assembly polls, including southern Telangana, where again the NE monsoon impacts.

Already, the NE monsoon seems to have played truant. The met department claimed around the time of the EC’s five-state poll schedule that the monsoon was just round the corner. The weatherman also issued a ‘red alert’ for Tamil Nadu, warning of very heavy rains the very weekend, in the first week of October. However, he withdrew both announcements, and now has said the monsoon could be expected now on October 25.

Without fail, all Opposition parties in the state have charged the Centre and the state governments with ‘politicising’ the IMD, to serve their political/electoral ends, if only to delay the by-polls.

Though just before Thursday’s verdict the Dhinakaran camp had said that they would decide on their future legal course after consulting the lawyers, post-verdict, they have all along held that they would not appeal to the Supreme Court. Electorally, they claim that they are on a stronger wicket, at least vis-a-vis the ruling AIADMK, identified with Chief Minister Edappadi K Palaniswami (EPS) and Deputy CM O Panneerselvam (OPS).

Though they are not saying it, politically it may be ‘suicidal’ for the Dhinakaran faction should the SC reject their petition, or worse still uphold the disqualification.

Yet, after the verdict, the AMMK leadership is on a safer wicket than otherwise, in the short term. The disqualification now, accompanied by the declaration of ‘vacancies’ in all 18 constituencies, means that the ruling party may not have reasons to woo them to cross over.

In the run-up to Thursday’s verdict, there were constant rumours and also social media chatter about the same, so much so the TTV leadership thought it prudent to ‘house’ them together at a resort in the southern waterfall town of Courtallam. They may now be allowed to go home, and begin work for the by-elections, whenever held, if and only if the leadership decides not to ask them to contest the HC verdict.

In the larger picture, the assembly is short of 20 members all at the same time, an unprecedented experience. That reduces the required majority from 118 in the 234-seat assembly to 108, including the speaker. Without the speaker, who still retains a ‘casting vote’ in case of a tie, the total number reduces to 213 and the majority mark goes to 107.

Every vote now counts in the state assembly, as the ruling party is walking on a wafer-thin majority, going by Tamil Nadu standards. The Opposition DMK-led combine has 98 MLAs on their side, and with four others who had won on the AIADMK’s ‘Two Leaves’ symbol in 2016 but do not belong to the party, per se, playing hide-and-seek with the party leadership, Dhinakaran with two or three other MLAs can give sleepless nights for the ruling party than what their post-verdict celebrations may seemingly indicate.

There is a reason. With the HC verdict now, unless the Dhinakaran MLAs do not seek and obtain a stay, the assembly can go ahead with a pending no-trust vote against Chief Minister EPS. However, the speaker had issued a show-cause notice to 21 DMK legislators, on a petition moved by the ruling party, months ago. There is a court stay on the speaker proceeding with their disqualification hearings.

This in turn has meant that the 21 DMK legislators can vote on any no trust motion, if moved again by the party. In the normal course, the AIADMK now has the numbers, but the question is if there could be a slip between the cup and the lip.

Already Speaker Dhanapal, at the instance of the AIADMK, has issued disqualification notice to actor-politician Karunas, who had contested on the AIADMK ticket for heading a separate party, ‘Mukkulathore Puli Padai’.

Karunas and other AIADMK legislators openly identifying with the Dhinakaran faction may end up getting the axe before the next session of the assembly, where alone a no-trust motion could be moved and/or taken up for voting.

If however a stage were to come that a no-trust vote becomes inevitable, the question would remain if any or many of the AIADMK legislators would then vote with the Dhinakaran camp, which could be expected to vote for the no-trust move.

Yet, there are also reports of rapprochement talks between the AIADMK and AMMK, where the name of the ruling BJP at the Centre keeps getting dragged in unnecessarily and unjustifiably.

The logic is that the BJP would like to have as many LS seats from as many ‘non-traditional’ states as possible. Given that TN with its 39 Lok Sabha seats has invariably voted en masse, its attraction seems to be more than elsewhere.

If there is any truth in such rumours and social media posts, then the HC verdict, in purely political terms, could imply a setback for Dhinakaran and his AMMK. 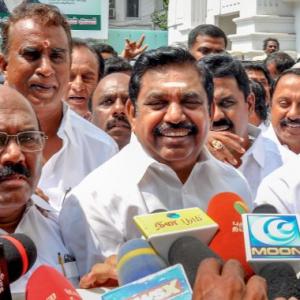 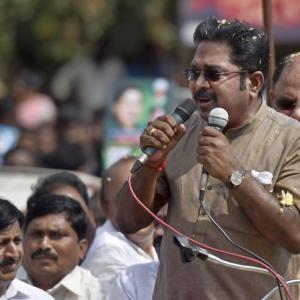