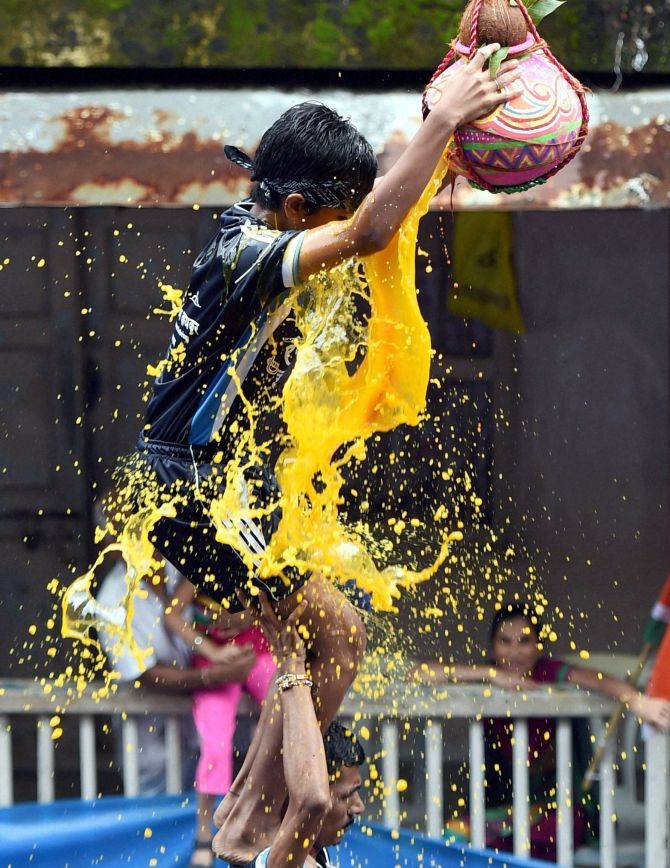 When the high court delivered the stringent norms, which in no way eliminated the fun of the proceedings but made it safer, by requiring proper safety measures, there was an undercurrent of defiance. Sensing the adverse implications of loss of a mass contact platform, the government persuaded itself to seek a review, says Mahesh Vijapurkar.

This year’s Dahi handi had every feature on display which is seen every year: tall human pyramids, din beyond the allowed 65 decibels, paid-for celebrities egging the event’s enthusiasm on, sponsoring politicians on stage sharing the limelight, live telecasts, use of public spaces like roads and chowks which affect traffic movement. And yes, even children in the higher tiers of the pyramid and little or no safety measures.

It was as if the Supreme Court’s order stipulating that under-12 kids be kept away from participation in the interest of their safety, keep the sound low as per law, avoid public places that inconvenience others didn’t count at all. In fact it appears to have been celebrated with a touch of triumphalism by the political class. It was they who prompted an appeal against more stringent conditions of the Bombay high court.

The high court had in fact kept the age bar for participation at 18 years in what is clearly a risky enterprise to get the pot hung high and bag the prize money, though the Maharashtra State Child Rights Commission had prescribed that the cut-off be at 12. It had also restricted the height of the pyramids to 20 feet -- that is some four-five tiers. The major conductors of the event -- that is politicians -- thought this was a restriction of the religious rights.

The Supreme Court, in revising the high court order, was generous and even this was hard to adhere to, going by what we got to see. Or, in their exultation of having had their celebrations restored to almost earlier practices, of course with conditions, they seemed to have forgotten that judicial orders need to be complied with in toto.

Dahi handi is a tradition peculiar to Mumbai, now spread to its metro region held a day after Janmashtami. Earlier it was a fun event held by kids in the neighbourhood mimicking Lord Krishna’s tactics to get to the butter kept out of reach at his home. He gathered his friends and outmanoeuvred the elders. Now it is a competitive thing, draw being the big ticket cash prizes. Ten tiers pyramids have been reached.

Huge crowds and tall pyramids are breathtakingly enchanting. They are also life-threatening, and more often than not people suffering fractures of limbs and spine and even skulls. People have ended up in hospitals, and also dying. But the event was so all-important in itself that in most places, the court orders were ignored. Even the police stayed their hand apparently for two reasons.

One, it involved politicians, big and small, ministers, MLAs, MPs and party biggies who swing clouts disproportionate to their position, and their wrath is better not incurred. The consequences of meddling are easy to imagine. Two, once the event got underway, getting into its midst would have had its implications of enraging already super-enthusiastic participants and their associates.

This non-adherence to the law as spelt out, and non-enforcement possibly explained away as prudence to avoid igniting a situation, is scary. Along with other things on display, the erosion of respect for the majesty of the law, and the awe of the law enforcers like police, was on display. The courts had not given them a free run they were used to in the past years. This disdain was scary, to say the least. That politicians led the mood is scarier still.

When the high court delivered the stringent norms, which in no way eliminated the fun of the proceedings but made it safer, by requiring proper safety measures, there was an undercurrent of defiance; at least one politician had planned to disregard it. Sensing the adverse implications of loss of a mass contact platform, the government persuaded itself to seek a review even as mandals appealed in the apex court. To them it was a crisis.

The laughable aspect was lip sympathy to post-injury management. Some of course had ambulances, and kids felt secure because their mandal carried a first aid kid. Safety harnesses were as rare as a snow storm in Jaisalmer. At one event, to cushion the falls, a politician-organiser had laid out a few mattresses. That is some imaginative compliance to safety requirements ordered.

Lack of action at least when policemen on duty noticed the brazen involvement of children -- like a seven-year-old in a Thane dahi handi whose picture at the top of a nine-tier pyramid was flashed in some newspapers -- didn’t invite action. In one case in the western suburbs, a 22-year-old leader of a mandal -- the group that goes around targeting the pots -- was held for having a child on their pyramid but the organiser of the event went scot free.

The claim of booking cases for drunk driving, riding three on bikes, rash behaviour on roads etc. is something that does not wash. They are at best nominal actions when even ordinary transport rules are broken by allowing ferrying of Govindas in open trucks. In some cases, the objection was to them riding on the driver’s cabin while others perched themselves precariously on trucks with no grip to stay in place.

Was it confusion among the police establishment if it merited steps under some rule or contempt of court? It is possible but ‘prudence’ seems to have ruled their minds but that day the loss of respect to law, led by politicians and abetted by police, and ignored by the society, is unnerving. It is probably a case of yet another step in the direction of freeing ourselves from our responsibilities.

Image for representation purposes only.