News
Business
Movies
Sports
Cricket
Get Ahead
Money Tips
Shopping
Sign in  |  Create a Rediffmail account
Rediff.com  » News » There is a just solution to the lingering Cauvery row

Verifiable ‘distress-sharing’ of available water may still be the way out of the Cauvery water row, says N Sathiya Moorthy. 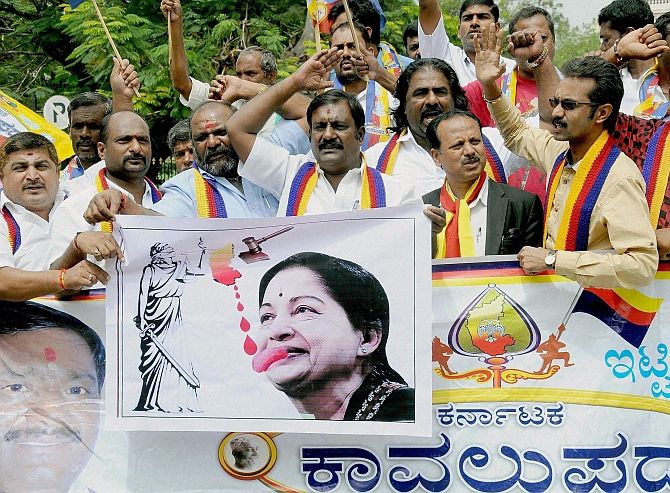 Image: Pro-Kannada activists protesting in Mysuru on Tuesday in the wake of the Supreme Court directive to the Karnataka state to release Cauvery water to Tamil Nadu. Photograph: PTI Photo.

Independent of this week’s violence and the Supreme Court proceedings, before and after the attacks, ‘distress-sharing’ of available water on a seasonal and verifiable basis may be the only real workable solution to the vexatious Cauvery river water dispute between Tamil Nadu and Karnataka.

In the process, the Supreme Court may have to get itself actively involved and also the Centre proactively involved in supervising and enforcing judicial decisions with medium and long-term consequences.

Such decisions may have to ensure that Karnataka as the upper-most riparian does not expand the scope of Cauvery water usage in the state, either for irrigation or drinking water or both.

The decision should also bind Karnatka to not add extra storage facilities or increase the capacity of the existing storage and transmission facilities, but without interfering with the required de-silting requirements from time to time.

The court could encourage the Centre, and also take the initiative to convince Karnataka and Tamil Nadu to agree to the construction of additional reservoirs under the Centre’s care, for which at least one proposal has been pending for two-plus decades.

In the mid-’90s, when distress-sharing was also on the table, but without Tamil Nadu showing much interest, the proposal involved the construction of a new reservoir, for the Centre to build, manage and monitor.

The idea was not to let the excess water in good rainfall years to go waste into the seas, as has been happening from time to time. Billigundulu on the inter-state border was chosen, but the two states wanted the new reservoir to be built within its own borders.

Historically, Karnataka was a late entrant to the active use of Cauvery waters, with its source Thalacauvery, located within the state. It commenced mostly in the first quarter of the 20th century, when the then Mysore kingdom also had legal entanglements and agreements with the Madras Presidency, under British colonial rule.

Against this, the Chola kings in ancient Tamil Nadu built the Kallanai some 2,000 years ago. To date, people from the Cauvery delta region and even the rest of the state celebrate ‘Aadi Perukku’ on the 18th day of the Tamil month of Aadi (July-August).

That was the day, year after year, the fresh flush of waters from the season’s first rains in the upper reaches flow through Thanjavur, the capital of Chola kingdom and the state’s granary even after Independence.

The Aadi Perukku festivities find detailed descriptions in the Tamil epics, namely, the Silappadikaram and Manimekalai. So much so, Cauvery delta Tamils living in skyscrapers in the US and have long since migrated to Delhi, Mumbai or Kolkata continue to celebrate it in their homes, like any other religious function.

Legal issues on this score came up when the 50-year term of a 1924 agreement between princely Mysore and colonial Madras ended. Tamil Nadu said that the provision for ‘review’ related only to the quantum of water whereas post-Independence Karnataka (then still Mysore state) argued that the ‘review’ referred to the very agreement.

In between, Karanataka had increased the area under Cauvery irrigation vastly and also built new dams on the river. So did Tamil Nadu. The latter also introduced a third or even fourth crop -- though only as a delayed crop in poor-rainfall years -- to the existing two-crop pattern. Today, when there are no waters, none of it matters anymore.

The commonality of early Congress political leaderships in the two states, as also the post-Independence Nehruvian fervour and national need for increasing food grains production in a big way meant that much of the controversy of those years got pushed under the carpet.

It was however a coincidence that the 1924 agreement ended when the Congress was long enough out of power in Tamil Nadu, but was still strong enough as the ruling party in Karnataka and also at the Centre, though the Indira Gandhi era had already begun and was flourishing.

To cut a long story short, the Cauvery Waters Tribunal, appointed by the Centre under the Inter-State River Disputes Act, awarded 419 tmcft of  Cauvery waters for Tamil Nadu from an average total inflow of 740 tmcft. Karnataka got 270 tmcft. The other two lower riparians, namely, Kerala and Puducherry were awarded 30 and 7 tmcft, respectively.

The February 16, 2007, award superseded the interim award of June 25, 1991, which gave Tamil Nadu 205 tmcft, including 5 tmcft for Kerala. After vexatious court proceedings and political/public protests, the Centre also notified the final award, as under the Act.

The present-day ruling All India Anna Dravida Munnetra Kazhagam in Tamil Nadu claims credit for Chief Minister Jayalalithaa obtaining the central notification during her earlier stint. The party got the title ‘Ma Cauvery’, or ‘Cauvery Thaai’ conferred on her.

The AIADMK has also continued to ridicule the DMK rival and its five-term chief minister, Muthuvel Karunanidhi, for not doing as much, or enough for the state, on the Cauvery front, as in the case of other river-water disputes, the fishers row and the ethnic issues, the latter two involving neighbouring Sri Lanka.

The DMK has stoutly denied all charges, and has always served the ball back to the AIADMK’s court. Other political parties in the state, depending on existing on prospective electoral alliance, have reacted accordingly.

However, the Centre has been forced to take a docile stand on the larger issues, often leaving it to the courts to decide. On occasions such as the current one, when Prime Minister Narendra Modi stopped with condemning large-scale violence, his predecessors had acted no different.

A single opportunity for a meaningful solution might have presented itself when Karnataka’s H D Deve Gowda was prime minister, and the ruling DMK and poll-ally Tamil Maanila Congress from Tamil Nadu held responsible positions in the ministry.

Though as chief minister only years ago Gowda had put up a stiff face, as prime minister he seemed to be more flexible. His Janata Dal successor chief minister, J H Patel, came from the state’s northern Krishna delta, and was not directly caught in the ‘Cauvery politics’ of the southern districts.

Taking forward proposals like ‘distress sharing’ would have worked better then. Bugged by the possibility of the AIADMK and the emerging ranks of neo-generation pan-Tamil parties like the Marumalarchi DMK and the Pattali Makkal Katchi taunting it for yielding too much, the DMK state government possibly decided to wait for a favourable final award of the tribunal after the sympathetic interim report – and a supportive court order, too.

It’s not only the two states that are bogged down over meaningful river-sharing. Between them, the Executive and the Judiciary too seem to be playing ping-pong over river-water disputes across the nation.

Though not necessarily tied down to the Cauvery water dispute, the Supreme Court’s order, directing the Centre to legislate upon a mechanism for inter-state river water dispute implied as much.

Considering that river water disputes tribunals came to be headed by retired judges of the Supreme Court or high courts, it’s anybody’s guess why the higher judiciary could not have disposed of such issues directly, even if equally time-consuming.

At the end of the day, even tribunal awards have been challenged in the Supreme Court, time and again. The higher judiciary has also repeatedly admitted interlocutory petitions, including those in post-award years, which pertain to enforcement or non-enforceability.

The early ’90s thus saw the Executive and the Judiciary at the national level playing ball with the Cauvery water dispute. Fair enough, there was no easy way out, but both sides were only seen as passing on the buck to the other.

After the interim award had been notified and violence rocked Karnataka more severely than at present, the Supreme Court directed then Prime Minister P V Narasimha Rao to call in the two chief ministers, namely Gowda and Jayalalithaa, to work on a ‘negotiated settlement’.

In between, Jayalalithaa in her first term as chief minister also went on a fast for a few days on Chennai’s famed Marina sands, demanding the Centre’s intervention, to have Karnataka release Cauvery waters.

The focus then shifted from Cauvery waters to Jaya’s fast, and the Marina fasting venue wore a festive mood, what with Tamil film personalities and industry leaders, and her AIADMK cadres, standing in long queues for hours together, to have her darshan and also express their solidarity.

The fast ended after a reluctant PM Rao despatched then water resources minister, Vidya Charan Shukla, to offer Jaya a cup of lemon juice. The fast ended, not the Cauvery water woes, either for Tamil Nadu or Karnataka -- nor its larger consequences, for the nation at large.

N Sathiya Moorthy
Related News: Karnataka, All India Anna Dravida Munnetra Kazhagam, Marumalarchi DMK, Nadu, Supreme Court
Print this article
What the Cauvery dispute is about
Science, not law, has the way out of the Cauvery crisis
Rowing back in time on Cauvery...