The Constitution is a terrific document, but it is also one that has suppressed Hindu majoritarian sentiment.
We are living through times when this suppression is being popularly rejected, notes Aakar Patel. There are some time bombs ticking in our Constitution that worry me.

These are in Part 4 of the document, about which we are assured by the Constitution's writers that 'the provisions contained in this Part shall not be enforceable by any court, but the principles therein laid down are nevertheless fundamental in the governance of the country and it shall be the duty of the State to apply these principles in making laws.'

So these are only principles then.

But our experience has been that these are akin to gospel.

How many literate Indians will assume that the government is obliged to Constitutionally bring about the prohibition of cow slaugher (Part 4's Article 48)? I would say the majority would think that.

The insistence with which the ban is pushed might lead one to forget that there is a distinction between a principle not meant to be enforceable and an obligation which must be legislated forthwith ('It's in the Constitution!').

Fewer Indians likely know about Article 47, which nudges the State towards making its citizens teetotallers ('The State shall endeavour to bring about prohibition of the consumption except for medicinal purposes of intoxicating drinks and of drugs which are injurious to health').

The insistence, seen most recently in Bihar, Kerala and Tamil Nadu, on creating better, more moral Indians through sobriety is also underpinned by what is seen as the same Constitutional obligation on legislators.

The time bombs that worry me are a little further down, in Article 51A, which specifies fundamental duties.

It is instructive to read them in full because, and I fear this is already happening, we are moving in the direction of turning these things into laws.

'Fundamental duties. It shall be the duty of every citizen of India:

Almost everything here fills me with a sense of dread.

Example: The bit in c saying it is our duty to uphold and protect India's sovereignty, unity and integrity. Are those who raise their voice against, say, the use of the Armed Forces (Special Powers) Act in Kashmir and the north-east violating this duty?

If so, should they be punished? One might say, no, it is only a general principle offset by other rights.

But then so is a ban on cow slaughter and a ban on alcohol.

The inability of our courts to often weed out majoritarian sentiment (as witnessed in the matter of cow slaughter) leads me to think that there is no proper safeguard available there either.

The Constitution is a terrific document, but it is also one that has suppressed the Hindu majoritarian sentiment.

We are living through times when this suppression is being popularly rejected.

The path to getting everyone to fall in line is open and it lies through such provisions as we have seen.

It is no good to say these are only Directive Principles or whatever else because our experience shows that this is no defence.

If something is 'in the Constitution', that is the end of it.

Going through the list, some of the clauses are quite chilling, such as 38(1): 'The State shall strive to promote the welfare of the people by securing and protecting as effectively as it may a social order in which justice, social, economic and political, shall inform all the institutions of the national life.'

Chilling, I accept, given the current mood more than anything else, but chilling nonetheless.

There are several (equal pay for women -- Article 39d) that I suspect will not be taken up with any degree of seriousness.

It is the ones that touch our current high-intensity nationalism that worry me, and these are the ones I call time bombs. 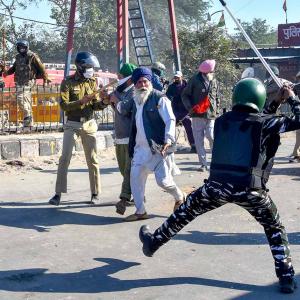