'On a new kidney, her immune system still getting used to it, she took on the Pakistanis at the UN, held meetings with her counterparts from across the world, and presented a picture of incredible poise and dignity,' notes Shekhar Gupta. There was both a buzz and a hush in the front rows at Rashtrapati Bhawan as Sushma Swaraj walked in to sit in the front row with the most distinguished visitors, not head for the imposing platform where the new ministers were seated for the swearing-in.

In her large fan club there was still hope.

Surely, Narendra Damodardas Modi couldn't afford to go into his second term without his most popular minister.

Her health challenges are no secret.

She, in fact, broke an old taboo in Indian public life by revealing -- on Twitter -- that she was undergoing a kidney transplant.

She had handled her recovery very well.

On a new kidney, her immune system still getting used to it, she took on the Pakistanis at the UN, held meetings with her counterparts from across the world, and presented a picture of incredible poise and dignity.

Never did a loose word or expression escape her lips, never a shot fired in anger or exasperation.

She made it her instrument to build an entirely new kind of diplomacy, reaching out to her compatriots across the world.

Her rivals and sceptics did snigger that with Mr Modi running all of foreign policy, all she was left with was to resolve passport-visa-immigration issues on Twitter.

If there were times when this bordered on being the overseas Indian's agony aunt, she didn't mind it.

In the Modi Cabinet, no minister had a really great deal.

Hers was a particularly tough one.

The prime minister got much global limelight and glory, and she ungrudgingly made way for him.

She, never short on charm, repartee and media adulation, had the old political smarts to read this writing on the wall.

She stepped back, into a back-room role, and never uttered a word about him other than praise.

Having known her since 1977, the year we both started our careers in the same small city of Chandigarh, she in politics as the youngest cabinet minister in Devi Lal's Janata Party government at just 25, and I as a city reporter with the Indian Express, I know her to possess more fortitude and self-respect than most politicians.

I am still not quite sure how she would have absorbed the new turn in her 42-year political career where she received applause as a visitor while her party's third government took oath.

Particularly when her successor was S Jaishankar, who had served under her for his entire tenure as foreign secretary (2015-2018) and as ambassador to the US before that.

Maybe she would have drawn on her phenomenal inner strength and taken it philosophically.

She also knew that this 'turn' wasn't merely a turn, but probably the conclusion of her remarkable political journey.

Although she was born in an RSS family in Ambala -- her father was a prominent RSS functionary -- she was first noticed as a defiant young lawyer for George Fernandes when he was arrested in the Baroda Dynamite Case during the Emergency. 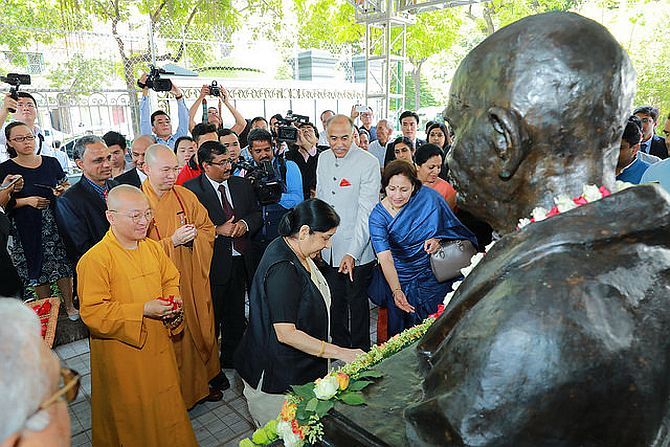 IMAGE: Then EAM Sushma Swaraj unveils a bust of Mahatma Gandhi at the Indian embassy in Hanoi, Vietnam. Photograph: MEAphotogallery/Flickr

Since Fernandes was a socialist, and as was Swaraj Kaushal, the fellow lawyer she married in the thick of their anti-Emergency activism, she somehow acquired the aura of a fellow traveller.

But she will remind you that her essential beliefs were of the RSS and the rest was just some popular misconception by socialist association.

In 1977, as the Emergency ended and Indira Gandhi's Congress was routed, and she became Haryana's minister for labour and employment at 25, and was seen as a rising Janata Party star and Fernandes protege, not an RSS/Jan Sangh native.

Quite remarkably, especially for a self-made woman in Indian politics of the 1970s, she became president of the Janata Party in Haryana at 27.

But once the Janata broke up later in 1979, she gravitated formally towards the breakaway Jan Sangh group.

Her rise from thereon, as a self-made non-dynast, was phenomenal.

She did much to convince us that she had bought into the BJP's conservatism, from banishing the dancing Ajanta Apsara from national calendars, to banning FTV, railing against condom ads for 'obscenity', protesting against the Sexy Radha song from Student of the Year, the explicit scenes of lesbian love between Shabana Azmi and Nandita Das playing sisters-in-law 'Radha' and 'Sita' in Deepa Mehta's Fire, and more recently her views on surrogacy and her description of a rape victim as 'zinda laash' (a living corpse).

But, that won't make her your usual, regressive BJP conservative.

There are a dozen aspects of her life and track record that tell you she is different.

She led a very middle class, mainstream life, made her own personal choices when few in that milieu would, and relentlessly pushed at her party's glass ceiling, reinforced through generations of patriarchy, not in the least because its parent, the RSS, is all-male in its hierarchy.

She wasn't afraid to speak out when the most abhorrent form of Hindu conservatism erupted in Mangalore and young women were being pulled out of bars and thrashed for 'immorality'.

She spoke out for freedom of choice and safety as a modern, independent woman and the mother of a young woman.

Some in her party frowned, but she was letting her rapidly growing fan club know that she was different. Sushma had made it known well in time that she was opting out when she announced she wasn't going to contest this year.

As one who fought 11 direct elections for states and Parliament, she would never avoid a good fight, especially at an age so young -- just 66 now.

But health had been her challenge, a consequence of early diabetes.

Her departure, therefore, was planned and dignified.

The only thing I might have suggested was a formal statement at some earlier stage that she was not going to join the new Cabinet.

That said, even her adversaries would acknowledge that she completes her career as a winner, and a party faithful.

She was an L K Advani acolyte but, after the 2009 rout, when he was refusing to make way for the new generation, she unhesitatingly joined the party's good 'gang of four' (with Venkaiah Naidu, Ananth Kumar and Arun Jaitley) to call on RSS chief Mohan Bhagwat to intervene and choose a young party president.

That brought in Nitin Gadkari.

This, despite the worst-kept secret in national politics about her rivalry with Mr Jaitley.

For the party's sake, they made common cause.

There were times during these past five years she may have felt slighted, overlooked or passed over by the PMO.

But, those with their ear to the Lutyens ground did not miss the significance when Mr Modi chose her over Mr Jaitley to stand in for him while he was overseas and his usual number two, Rajnath Singh, was in China.

He asked her to be in Delhi rather than on her pre-planned visit to Dubai.

This was acknowledgement of the trust he had in her judgement as well as loyalty.

It was also the peak of her political career.

You could always debate what would have happened if the BJP/RSS had chosen her as that young leader of the future after Mr Advani.

She is, after all, younger than Mr Modi.

What kind of BJP would she have had then? Probably not as ideologically conservative as what we have now.

And unlikely to be as cohesive and united either.

It's a good discussion, but academic.

In politics as in cricket, every star cannot end up as a Kapil Dev or a Sachin Tendulkar.

Somebody will have to play the Rahul Dravid too, indispensable but denied the fullest fame and power.

That's a fair description for Sushma Swaraj, the leader, if you'd forgive me this bit of pop sociology. 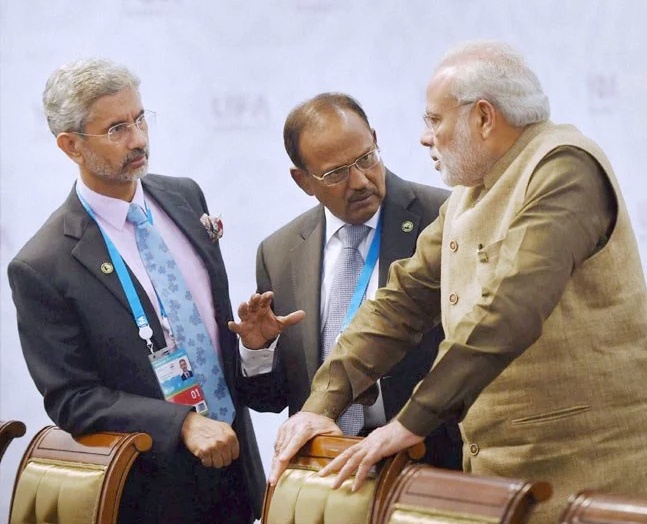