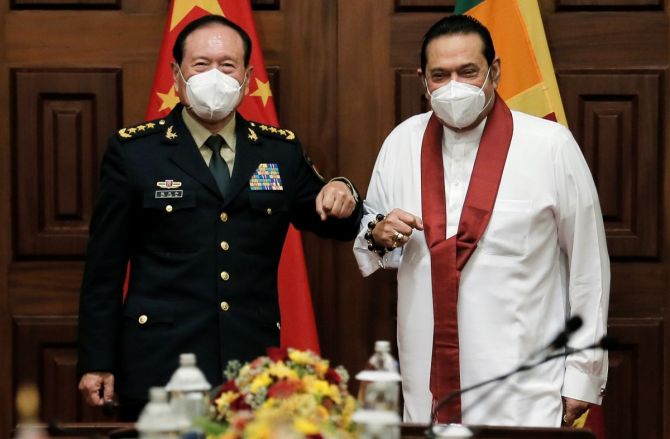 Many would consider the passing of the controversial Colombo Port City Economic Commission Bill by the Sri Lanka parliament, with a comfortable margin on May 20, as a victory for President Gotabaya Rajapaksa.

President Rajapaksa's personal reputation was at stake, after supreme court scrutiny had found both constitutional and procedural anomalies with the draft.

In the end, the government accepted all the amendments suggested by the supreme court, though it bypassed suggestions for referendum and two thirds majority for certain sections, to rush it through parliament.

The Act empowers the Sri Lankan president to create a commission for the special economic zone to manage the SEZ, accord tax and duty concessions for investors.

Concerns of 'foreigners', euphemism for Chinese, being inducted into the commission were assuaged after President Rajapaksa appointed President's Counsel Gamini Marpana to head the Port City Commission with six other Sri Lankans including Treasury Secretary S R Attygalle as members.

The Economic Commission, which was mooted as an independent body, will now function under the country's regulatory authorities and constitutional bodies including the parliament.

The companies in the Colombo Port City will have to operate under Sri Lankan laws and judiciary and conform to financial and customs regulations applicable to elsewhere in the country.

This has taken some sheen off the original proposal, depriving the Colombo Port City much of the hype to become an international financial hub on the lines of Dubai or Singapore.

Reconciling the demands of the SEZ to attract investment with the constraints imposed by the Act, must be worrying the Rajapaksas.

The project is being developed by CHEC Colombo Port City Pvt Ltd with an initial investment of $1.4 billion.

Reclamation of 269 hectares of land was completed by January 2019.

The development of common infrastructure underway now is expected to be completed by the end of the year.

According to a PwC report, in the next 20 years, real estate development, including commercial, financial, hospitality, residential and social infrastructure, is expected to be completed.

After that in the operational stage when the project matures, in all 210,000 jobs are estimated to be created.

The PwC report also envisaged the value addition to the GDP due to the project at infrastructure, lease of land and construction stage at $4.16 billion and $13 billion respectively.

During the debate in parliament Prime Minister Mahinda Rajapaksa spoke of $15 billion investments flowing into the project in the next five years.

He also touched upon the huge potential for creating 200,000 jobs during the construction phase of the project.

These claims have given rise to huge expectations about the project among the people, though many have expressed their concern over sovereignty of the project, because of increasing Chinese domination seen everywhere.

The Colombo Port City Economic Commission Act coming into being may be considered a victory for China as it gains yet another strategic foothold in the heart of Colombo.

In the larger context of China's global image building under President Xi Jinping, the CColombo Port City project promoted by the state-owned China Heavy Engineering Corporation (CHEC), is set to showcase the success of the Bridge and Road Initiative.

Quoting what it claims to be a cabinet paper submitted by Prime Minister Mahinda Rajapaksa on May 17, Nimal Ratnaweera writing in the Web-based Colombo Telegraph, averred, 'Over the next two years, the government plans to sell hundreds of acres of prime State-owned land in Colombo Fort and its adjacent Slave Island area, including property currently being used by the Sri Lanka Air Force and Sri Lanka Army.'

The Colombo Telegraph, known to be critical of the Rajapaksas, said it learnt 'the bulk of these properties have been reserved for the China Harbour Engineering Corporation, through an intermediary local firm created specifically for the purpose of easing the path for transfer to the Beijing-owned entity and other affiliated investors.'

The Urban Development Authority was seeking approval to move ahead with three investment portfolios: The Colombo Fort Heritage Square, The Immovable Property Development and The Government-owned Hospitality Sector under Selendiva Investments.

The earlier Sirisena-Wickremesinghe government was known to have listed many of these government properties in a bid to transform Colombo City into a commercial and financial capital.

According to the Colombo Telegraph, 'that diversification was to be streamlined under a competitive bidding process for interested investors.'

But given the speed at which the Chinese operate, the competitive bidding process may be given the go by as it happened recently.

Close on the heels of the enactment of the Colombo Port City Economic Commission, the cabinet decided to award the contract to build the 17 km Kelaniya-Athurugiriya elevated highway project, estimated to cost $1 billion to the CHEC, without competitive bidding.

The Chinese company will build, own and transfer the major highway after 17 years, adding yet another feather in Xi's BRI cap.

First, the ability of the government to provide a safe and corruption-0free environment with good governance both within and outside the economic zone.

The Sri Lanka government under Rajapaksas carries a legacy of total disregard for international concerns since the end of the Eelam War in May 2009.

These include issues of governance, rule of law, restoring ethnic peace and human rights, which continue to figure in the UN Human Rights Council deliberations.

The Sri Lankan judiciary has not covered itself in glory in quite a few cases. The state of law and order has been subject to severe political influence.

Corruption is endemic. The mess created in handling the COVID-19 pandemic speaks poorly of the administration's ability to handle critical situations facing the country.

The Rajapaksas have become increasingly dependent upon China to bail them out, not only in the UNHRC and the UN Security Council, but to ward off financial crunch.

They are paying the price for it by taking decisions favouring the Chinese, to the detriment of other nations.

They cancelled the memorandum of cooperation the previous government had signed with India and Japan to jointly develop the Eastern Carrier Terminal at Colombo port, on the specious ground of Sri Lankan sovereignty.

Such concern was markedly absent when it came to the Colombo Port City project, actively and publicly promoted by the CHEC.

The Rajapaksas also decided against signing $480 million investment plans of the Millennium Cooperation Corporation on similar grounds, though in his earlier term as president, Mahinda Rajapaksa had mooted the proposal.

Both the US and India are unlikely to forget such conduct, when they deal with Sri Lanka.

With both the US and India recasting their relations with China, Sri Lanka could face the flak of their reaction.

Lastly, one wonders how President Gotabaya Rajapaksa would stick to his assurance to India's concerns on security, with the Chinese literally breathing down his neck.

The situation reminds us of the visuals of the Singapore-registered cargo ship MV X-press Pearl burning off the Wwest coast of Sri Lanka for over two weeks, polluting the environment around, while Sri Lanka, India and international fire fighters douse the fire.

They learnt rather too late that the ship was carrying 25 tons of a toxic chemical: Nitric acid.

2021 is the Chinese Year of the Ox, considered good for those born in the Year of thr Snake, like Xi Jinping (born in 1953); Mao Zedong was also Snake year-born.

So far it seems to be working for him in Sri Lanka. Xi is winning the war without firing a shot in Sri Lanka. 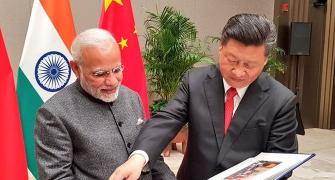 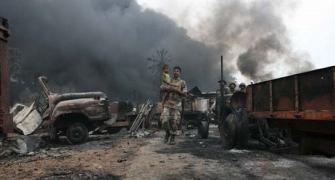 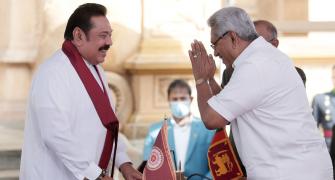 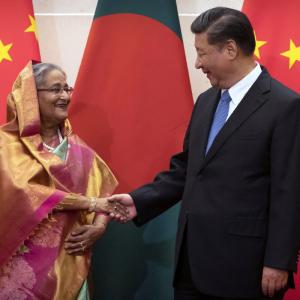