Whatever its apprehensions and concerns about the regime of the Rajapaksa clan, India must be ready with unconditional assistance when Colombo asks for it. Because it will, observes Aditi Phadnis. 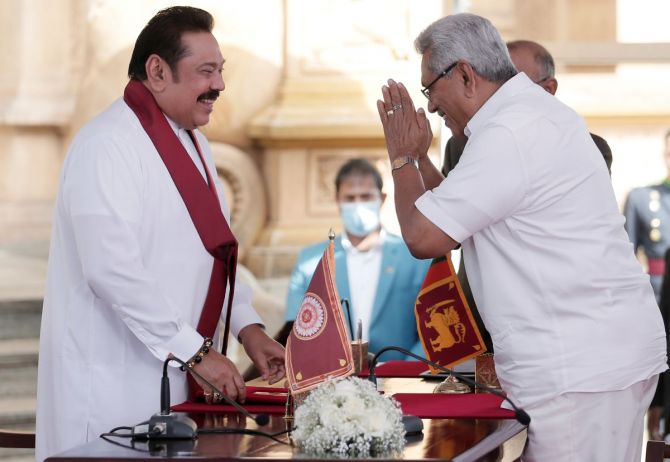 No one could have said it better.

Analysing the recent parliamentary elections in Sri Lanka, Dayan Jayatilleka, former ambassador to Russia and France and Lanka's permanent representative to the UN at Geneva, and now advisor to the Leader of the Opposition Sajith Premadasa, wrote: 'President Gotabaya Rajapaksa repeatedly made two requests of voters during his electioneering walkabouts. One was that they had given him 69 lakhs (6.9 million) of votes at the presidential election, but now he wanted 79 lakhs (7.9 million) votes.'

'The other was that he wants a two-thirds majority. He got 6.8 million votes, which is a fraction less than what he polled in November 2019. His personal best remains the ruling party's ceiling...'

'Five years ago, in 2015 August, Mahinda Rajapaksa had lost the presidential and parliamentary elections, was not the leader of the SLFP, had been denied the leadership of the Opposition and did not lead a political party of his own.'

'Significantly, for the first time in four, he was sworn in as PM at a Buddhist temple, which was also a first for any Lankan PM. The new times are the very old times.'

This summarises the recent parliamentary elections and what is to come in Sri Lanka.

The implications of the two-thirds majority are clear: It allows the ruling establishment to amend the constitution and bend Sri Lanka to its will.

Most Sri Lankans are placing bets on how soon the 13th amendment -- which was a product of the India-Sri Lanka Accord and visualised devolution of powers to the Tamils in the north and east province of the island -- will get the Hamlet poison.

Prime Minister Narendra Modi had told Mahinda Rajapaksa in February during his India visit that he wanted the full implementation of the 13th amendment.

Full? Provincial councils are likely to be emasculated, the governor to the Tamil-majority north will likely be ex-military, and the land transferred to Tamils could be reclaimed by the armed forces on the grounds that they are needed for the defence of the island.

Very quickly, the new times will be the very old times.

What about the project for the Sri Lankan majority, the Sinhala Buddhists?

Mahinda Rajapaksa invoked the old bogey of the India-Tamil coalition to remind the Sinhala Buddhists what they had gone through in the 1980s and warned them it could happen again.

Sri Lankans, sotto voce, say there is a threat to their existence: It comes from India, via the Tamils.

A two-thirds parliamentary majority means the Sinhala Buddhist identity will be cemented like never before so that the humiliations it has had to go through can never be repeated.

Once, India stood in between.

But now, India is plumb out of options. It has run out of leverage. All it can do now is to stand by and watch.

Much has been made of Chinese interests -- investment and FDI -- in Sri Lanka and how much more will flow in because of the Rajapaksas.

But many Sri Lankans are themselves re-evaluating this as an option.

Hambantota port continues to be a white elephant.

Matale airport is still the emptiest airport in the world: No flights land or take off from there.

The eastern terminal of Colombo port, which was to be constructed jointly by India and Japan, will now be re-negotiated, but as a warning to China -- that Sri Lanka will not be toyed with and that it has other options.

The biggest immediate crisis for the country is the management of its economy.

If the impact of COVID-19 is factored in, the budget deficit could go up to 10 per cent of GDP this year, and the economy may shrink by up to 5 per cent.

There is no fiscal space for tax cuts and extra public expenditure.

The government needs to negotiate a debt moratorium, extra loans, and possible debt restructuring with the International Monetary Fund and others.

Another loan from China cannot be ruled out if the IMF does not oblige.

Sri Lankan resilience and the national capacity to bounce back after repeated disasters are legendary, and an example to the rest of South Asia.

Whatever its apprehensions and concerns about the regime of the Rajapaksa clan, India must put transactionalism aside and be ready with unconditional assistance when Colombo asks for it. Because it will. 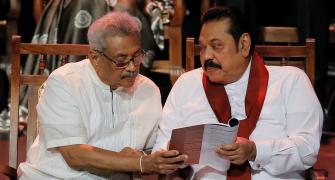 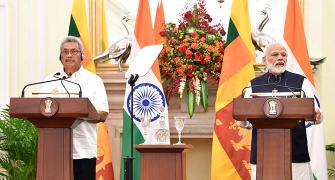 'Sri Lanka will never pose a threat to India'