Major General Asif Ghafoor's transfer indicates General Qamar Bajwa is well in control once more, pushing behind the discontent among the peer group of senior generals over extension of his tenure, says Rana Banerji, who headed the Pakistan desk at the Research and Analysis Wing, India's external intelligence agency. 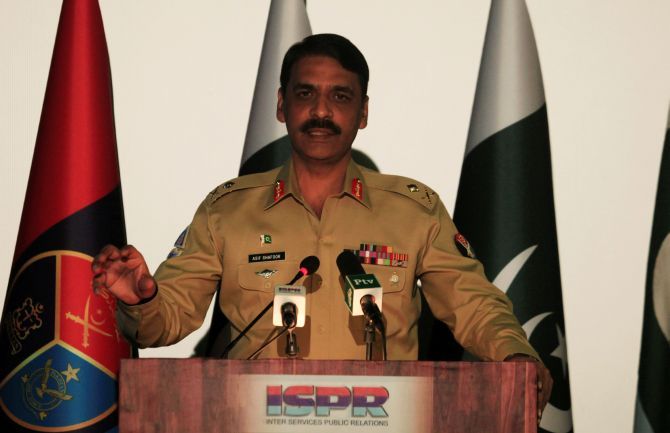 It indicates, first that Pakistan army chief, General Qamar Bajwa is well in control once more, pushing behind the discontent among the peer group of senior generals over extension of his tenure, especially the defiance shown by superseded Lieutenant General Sarfaraz Sattar.

Secondly, it amounts to a pulling down a notch or two, of the much too high profile ISPR DG, who had fallen into the habit of tweeting, on his personal twitter account, 'peace for change', on all manner of subjects, some not pertaining to the Pakistan army or perhaps exceeding his brief!

An artillery officer, General Ghafoor was quite senior, having reached the top bracket of two star generals sweating for promotion as lieutenant general.

For him to be now sent as General Officer Commanding, 40 Division, Okara, under 2 Corps, Multan, could indicate he may have missed the bus, or would have to cool his heels temporarily, in a comparative backwater assignment.

His successor as DG, ISPR, Major General Babar Iftikhar, is much junior, but has had a very good career so far.

An armoured corps officer, he is currently General Officer Commanding, 1 Armoured Division, Multan a prestigious unit of Pakistan's second strike corps, 2 Corps, Multan. He was earlier an instructor at the Pakistan Military Academy, Kakul, served as chief of staff at a corps headquarters and has commanded a division in the terrorism strife-torn area of Waziristan, in the Federally Administered Tribal Areas, now merged into Khyber Pakhtunkhwa province.

By changing the face at the ISPR at this juncture, General Bajwa seems to have broken from the recent practice of the chief carrying his chosen publicity 'major domo' upwards. His predecessor General Raheel Sharif had promoted Major General Asim Bajwa as lieutenant general.

Apart from signaling a fresh start, with new faces, General Bajwa has shown all over again that he will not remain beholden to erstwhile favourites while continuing to go by professional merit, as may have been decided upon by collegiate consensus.

He would surely have played a crucial role in the last few weeks, keeping an eye on General Sarfaraz Sattar and other ambitious generals hoping to benefit from General Bajwa's temporary discomfiture.