Stalin owes his victory, like in 2019, to the hate-campaign of the local Hindutva forces, which kept haranguing him, and even his dead father, notes N Sathiya Moorthy. 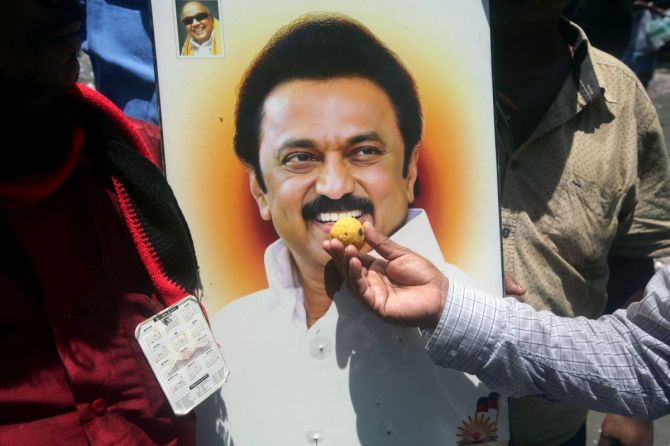 The late Dravida Munnetra Kazhagam patriarch M Karunanidhi may not have known the meaning of the Russian word 'stalin'. He named the third of his four sons after the Soviet leader Josef Stalin only because of his own identification with the socialist politico-economic philosophy.

But today, the son, Muthuvel Karunanidhi Stalin, at 68, has proved that he is the never-say-die 'steely' man that his name means in Russian.

No other political leader would have waited for a full 50 years and more to become the chief minister of a state where the party he belonged to was already a well-acknowledged household name. But he is also possibly the senior-most political leader of such standing and national acknowledgement, possibly after the Bharatiya Janata Party's forgotten veteran L K Advani and a few others.

This, as also his party's known non-acceptance of political Hindutva in every form, has made him possibly the most acceptable candidate to bring together dis-spirited, desperate opposition to the ruling BJP-National Democratic Alliance at the Centre, without staking a claim to the prime minister's gaddi.

It's a lesson that he has learnt well under his even more illustrious, never-say-die father, who declined the late Biju Patnaik's offer to make him prime minister ahead of the historical parliamentary polls of 1996.

It does not mean that Stalin and his incoming government in southern Tamil Nadu would be antagonistic towards the BJP-NDA government. If anything, there have been back-channel contacts between the two over the past years, especially after BJP strategists failed to give Tamil Nadu on a platter to Prime Minister Narendra Modi, as promised in the Lok Sabha polls of 2019, especially so after the successive deaths of AIADMK chief minister Jayalalithaa Jayaram (2016) and Karunanidhi (2018).

But there are also issues of central funding for state projects and pending payments of GST dues, NEET and a host of anti-federal, anti-minorities, and 'anti-people' policies that are closer to the heart of the DMK as a party and Stalin as a leader.

His approach would thus be a combination of both -- working with the Centre on larger national issues, including security and foreign policy, but fighting for the state's rights, going beyond what the Constitution has promised but which promises are also not being kept since.

The DMK alliance sweep of the assembly polls owes to Stalin's experience and exposure, which alone rival AIADMK Chief Minister Edappadi K Palaniswami lacked -- and it was a major contributing factor.

Learning from the previous 2016 experience, when the Congress ally could win only eight of 41 seats contested, leading to their losing the election to the incumbent AIADMK under Jayalalithaa, Stalin drove a hard bargain, and made the other to settle for 25 seats.

At press time the Congress was leading in 17 seats, or a two-thirds strike-rate, against one-fifth in 2016.

Together, the DMK restricted seat-share for allies to around 60, of which they were leading in 37, or around 60 per cent.

Included among them for the breakaway MDMK (1993 vintage), whose six candidates contested on the DMK's Rising Sun symbol, with four of them leading at last count.

For the DMK it means a more comfortable lead when tested against anti-defection law. For those MLAs, if MDMK boss Vaiko accepted it, one or two of them could become ministers.

Against the DMK's win-win formula, the AIADMK, refusing to learn from the DMK and not acknowledging the pioneering tactic of Amma, gave away close to 50 seats to allies, including those that contested under their 'Two Leaves' symbol.

Only 10 of them cleared the victory post, as reported last, accounting for a one-fifth strike-rate. What AIADMK leaders claimed as EPS's exceptional tactic of roping in the PMK with its five-per cent transferrable vote, through the last-minute 10.5 internal reservations for their Vanniar community and 23 seats for the party, did not help much.

If two ex-AIADMK ministers and Rajya Sabha members, K P Munuswamy and Vaithilingam, decide to stay on in Delhi, there will be by-elections for the assembly seats they have won. Or it may be the other way round if they become MLAs.

The PMK, at best, was close to winning five seats while their alliance worked not in the Vanniar heartland in the northern districts, but in the peripheral western districts where the AIADMK was already strong.

A case in point is that of the outgoing chief minister's Edappadi constituency, where Vanniars counted the most in terms of vote-bank. His massive victory margin belonged there, that too after the party candidate trailing by 8,000 votes in the assembly segment as the DMK took the Salem Lok Sabha seat in 2019.

When the figures add up, the story behind the DMK;s success strategy unveils itself. It does not stop there, though. As DMK insiders recall, they were in a fairly competitive, if not comfortable, position, in elections 2016, at least until Modi called Jaya to congratulate her (and also West Bengal’s Mamata Banerjee) when only 30-40 per cent of the votes had been counted in Tamil Nadu.

That sent out a clear message to the officials down to the level of counting and returning officers. This was more so after the chief electoral officer of the state was shown on TV news channels, standing in the long queue to greet Jaya, outside her Poes Garden residence. The huge gates of the house opened for the purpose early on, once the PM had greeted her.

This meant that a substantial number of touch-and-go seats were lost to the DMK, with most party candidates showing little interest to contest the results in the Madras high court.

Learning this lesson, too, from 2016, Stalin this time openly urged his cadres not to leave the counting centres until their candidate had received the certificate from the returning officer concerned.

For someone who had waited patiently and without murmurs through his father's long life to wear the mantle only after his father's exit, Stalin had his job cut out as a party leader. It was unlike elder brother M K Azhagiri, who lost everything political, including party membership, because of his overbearing and equally impatient attitude.

Learning from his father Karunanidhi, who would lose an election badly today, only to appear at the party headquarters the very next morning to enthuse and re-energise his cadres, Stalin began early, from the days the late MGR began sweeping successive polls from the post-Emergency elections 1977 and until the latter's death in 1987.

It is this unique quality that has kept him in good stead for the present -- and well into the future, too.

In comparison, minus political power, the AIADMK under EPS and party coordinator and outgoing deputy chief minister O Panneerselvam) has to prove its staying capacity. They should not be shocked if the BJP at the Centre gets tempted again, either to take pot-shots at their party or try to divide them or force them to re-unite with Sasikala Natarajan, Jaya's one-time live-in confidante, who spent four years in a Bengaluru prison.

But the chances are that the AIADMK may be squabbling within, as OPS in particular was keen to show his mettle as the party coordinator, with EPS being only the joint coordinator and the party's chief ministerial candidate.

The results have shown that once again after the Lok Saha polls, the AIADMK vote 'transferability' for the BJP did not happen. It was so also for its PMK ally.

That should explain the BJP leading only in three seats against 20 they contested after demanding 60, and the PMK bagging only six of 23.

Included in the list of BJP losers was actor Kushboo, who was turned down by the voters of the Thousand Lights constituency in Chennai, for being a party-hopper -- from the DMK to the Congress to the BJP, all without any reason that could convince anyone but herself.

Those BJP leaders that won or otherwise creditably had a political base of their own, and also had won the sympathies (M R Gandhi, Nagercoil) or support (ex-minister Nainar Nagendran, AIADMK renegade, Tirunelveli) of the local population.

Translated, there can be a clamour within the AIADMK to ditch the BJP especially ahead of the delayed urban local bodies polls, including those for the 15 municipal corporations, including that for capital Chennai.

For the DMK under Stalin, yes, it becomes a double-ton after the near-clean sweep in the Lok Sabha polls earlier.

It is a hard-won victory for Stalin and the DMK, who had to sit it out for the past ten years, after losing elections 2011 to the 2-G scam, despite being incumbents in the state.

The new chief minister has his job cut out, starting, not just with all his poll promises that could push the state deeper into the red from the inherited Rs 5 lakh credit. Instead, he will have to tackle the exploding second wave of the pandemic, which has been managed mostly by the bureaucracy under able Chief Secretary Rajeev Ranjan for close to a month since the conclusion of polling on April 6.

Stalin's choice of health minister, as much as those for finance and industry (the latter aimed at job-creation after five years of national recession) will be closely watched. Their performance will be watched even more.

So will be that of party cadres from bottom up, whom he is expected to hold under a leash, lest they should bring bad name to his leadership, through lower-level corruption and by throwing their weight about in government offices and police stations.

For all this, however, Stalin owes his victory this time, like in 2019, to the hate-campaign of the local Hindutva forces, which kept haranguing him, and even his dead father and the latter's ideological parent in Periyar E V Ramaswami, as 'anti-god, anti-religion, and anti-Brahmin'.

Yet, the gods seemed to have answered not their prayers, but those of his wife, Durga Stalin and daughter, Senthamarai Sabareesan, both of whom frequented temples across the state and even elsewhere in the country, as not even the most devout among his critics would have done over the past nearly a decade.

Senthamarai, for instance, was reported to have undertaken the giri valam or walking 14 km of hilly terrain barefoot, at the temple town of Thiruvannamalai, on the monthly full moon night, April 26-27.

Durga even went all the way to Varanasi, not long after Karunanidhi's death, to perform the the last rites for her father-in-law, accompanied by his daughter, Kanimozhi, MP.

In turn, Stalin cannot but thank Modi, who took his time congratulating him after the results were becoming clear.

The Centre's relentless campaign on issues that were seen as affecting Tamils and Tamil self-respect, including Jallikattu and NEET, apart from loss of jobs, incomes and wealth, no thanks to the alleged bad management of demonetisation to COVID-19, had set the mood for the voters to think of 'anti-incumbency' without confining it all to the ruling AIADMK alone in the state.

Hurting Tamil pride the most was the feeling that the Centre and the BJP ministers at the Centre were pulling the strings for the AIADMK rulers in the state to dance and stop as the former wished.

As a DMK leader quipped only half-mockingly, "For Mamata Didi in West Bengal, the Modi-Amit Shah duo personally damning her and taunting her hurt the Bengali atma shonman (self-respect). Here, they outsourced it to the Hindutva brigade. If only the two had done it to Stalin, too, personally, who knows, we would have cleared another 50 or 60 seats."