News
Business
Movies
Sports
Cricket
Get Ahead
Money Tips
Shopping
Sign in  |  Create a Rediffmail account
Rediff.com  » News » Will it be Mamata vs Modi in 2024?

By presenting the battle in Bengal as one between Mamata on one side and Modi-Shah on the other, the saffron camp has projected the former as a larger-than-life figure, a portrayal which has the potential of turning her into Modi's main competitor in 2024, predicts Amulya Ganguli. 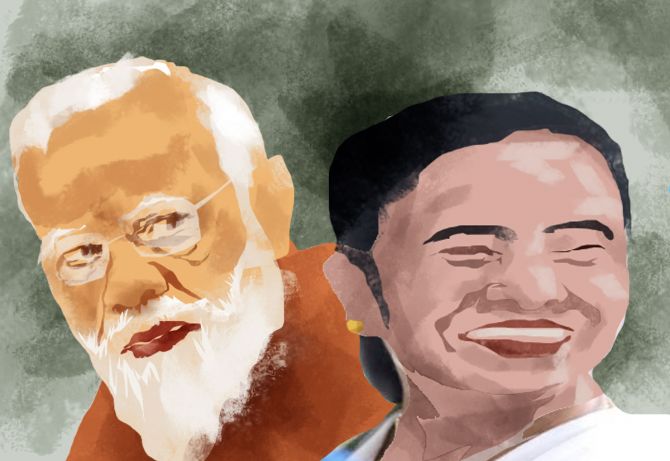 The BJP's defeat in West Bengal must have humiliated and stung the party all the more because it had thrown in all that it had to wrest the state from Mamata Banerjee's grasp.

By organising multiple visits by the prime minister and the home minister -- the Nos 1 and 2 in the Hindutva hierarchy -- the BJP gave the impression that the West Bengal contest was some kind of a life-and-death struggle for it where the party had to succeed at any cost.

Given the intensity of the effort, the drubbing at the Trinamool Congress's hands has not only been a severe loss of face for the BJP, but an irreparable blow to the prestige of both Narendra Damodardas Modi and Amit Anilchandra Shah.

Given how their respective claims that the game is over for Mamata -- 'khela shesh' - and that the BJP will get 200-plus seats in the 294-member assembly have been blasted, it will be a long time before the duo will be able to summon the courage to indulge in such extravagant rhetoric again.

In contrast, Mamata has shown remarkable political resilience, fully living up to her reputation of being a redoubtable street fighter who is not scared of taking on any challenger, not matter how formidable.

Fighting single-handed when scores of her lieutenants were being lured away by the BJP, and facing charges of nepotism for favouring her nephew, she stood her ground, undaunted by the buffeting winds of her party's alleged corruption exemplified by the 'cut money' phenomenon of commissions extracted from houseowers and buyers of land.

Normally, such allegations would have undermined any other government which had been in power for a decade.

It is mystery how she has succeeded in brushing off the charges, including the one about letting her party men run amok during the 2018 local body elections and being less than honest in the distribution of cyclone relief material.

But something must have resonated with the locals when she spoke of herself as Bengal's daughter and alienated them when the BJP displayed its ignorance about the state's history and culture, saying that Rabindranath Tagore was born in Shantiniketan.

It is also possible that Modi's mocking tone of 'didi-o-didi' in his speeches, which Trinamool MP Mahua Maitra likened to the catcalls of roadside Romeos, did not go down well with the hoi polloi.

Arguably, the BJP's excessive incantation of 'Jai Shri Ram' may have also started to have a jarring effect in a province where Durga and Kali are revered more than Ram who was once described by a former BJP apparatchik (who is now in the Trinamool) as a north Indian god.

Apart from the BJP facing the disadvantage of beimg regarded as a party of Hindi-speaking outsiders, Mamata also had the advantage of the collapse of the third front of the Left, the Congress and the Indian Secular Front as a player in the polls.

The fear that the ISF of Abbas Siddique, a small-time cleric at a local Muslim shrine, will draw away the Muslim votes from the Trinamool has been proved wrong.

The Muslims knew who was their friend and who their foe.

This perception could not but have been accentuated by the description of Mamata Banerjee as Begum Mamata by her comrade-turned-detractor Suvendu Adhikari, who contested against her in Nandigram.

Adhikari also expressed the fear that Mamata's victory will lead to the Muslim-dominated areas of Nandigram turning into mini-Pakistans.

This familiar charge of Muslim appeasement is another of the many barbs which the BJP threw at its main opponent.

But none of it has worked.

Intead, by presenting the battle in West Bengal as one between Mamata on one side and Modi-Shah on the other, the saffron camp has projected the former as a larger-than-life figure, a portrayal which has the potential of turning her into Modi's main competitor in 2024.

This is all the more possible because the Congress's lacklustre performance in Assam and falling behind the DMK in Tamil Nadu and the Left in Kerala mean that Rahul Gandhi cannot be expected to lead the charge against Modi as the leader of an Opposition alliance at the national level.

Since the winner takes all, that responsibility is likely to go to Mamata if only because she confronted and routed the Modi-Shah jugalbandi which neither M K Stalin nor Pinarayi Vijayan did.

The Trinamool has long been clamouring for Mamata to be a prime ministerial candidiate.

Now that cry will grow louder.

As for the BJP, Modi and Shah will realise that all the king's horses and all the king's men cannot put their party on the pedestal in the absence of popular support.

Neither the party's enormous resources, nor the control over institutions, has been enough against a doughty, never-say-die woman who had beaten the Left and has now worsted the Right. 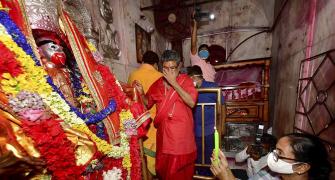 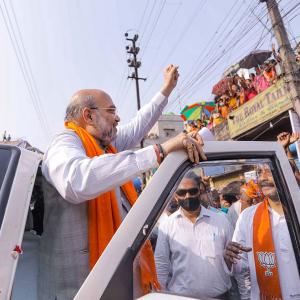