News
Business
Movies
Sports
Cricket
Get Ahead
Money Tips
Shopping
Sign in  |  Create a Rediffmail account
Rediff.com  » News » Mr PM, what were you trying to tell the nation?

'The BJP has sent out a message that its allies are at its mercy.'
'The allies cannot pressurise or bargain with the BJP any more,' says Mohammad Sajjad. 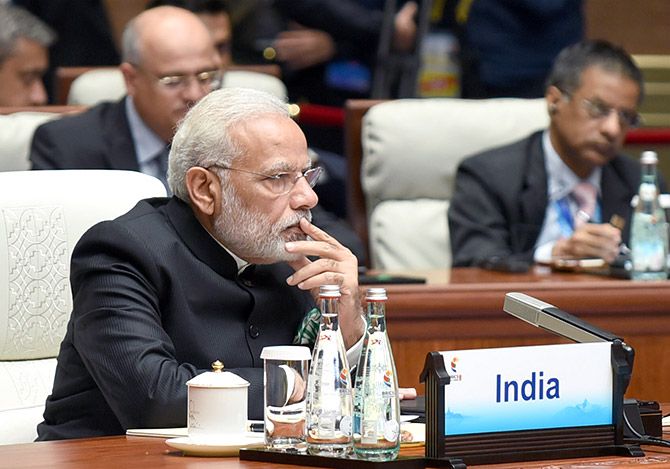 The objective usually cited for a ministeral reshuffle is: To replace under-performers. But people read into, and beyond that.

Quite often, a reshuffle is an exercise to pacify dissenters, accommodate allies, make a political statement about social engineering, take care of regional and other factors of representation, and so on.

This reshuffle has taken place soon after:

On all these counts the BJP regimes suffered huge embarrassment. Though Opposition leaders in UP -- Akhilesh Yadav hardly made any effective intervention; Mayawati, having alienated her non-Jatav Dalit votes long ago, seems to have become oblivious -- were ineffective, but Jharkhand's Congress leaders Ajay Kumar and Subodh Kant Sahay made significantly strong interventions in Jamshedpur. Unlike Madhya Pradesh, where the bitterly factionalised Congress failed to cash in on the Vyapam scam.

So, is this reshuffle meant to divert the people's attention from these embarrassments?

Arguably, one of the most newsworthy aspects of this reshuffle is not inducting any of Nitish Kumar's loyalists into the Union council of ministers.

Nitish Kumar, it appears, has been placed on probation, probably till the next general election.

If he can deliver enough Lok Sabha seats in 2019 only then will the JD-U be rewarded proportionately.

Will Nitish retain his hold on the Ati Pichhrha and MahaDalit social base?

As of now, the RJD is not reaching out to these 'subaltern' groups which it has consistently been losing since 1997 after Rabri Devi succeeded her husband Lalu Yadav as Bihar chief minister.

The RJD continues to be a party of Yadavs and Muslims (M-Y) who together constitute around 30 per cent of Bihar's population.

Simple arithmetic would suggest that in a bi-polar polity, if the other 70 percent are on the other pole, the RJD will obviously continue to be only in the Opposition.

As of now, it looks less likely that the aspirational groups of non-Yadav Other Backward Classes and Dalits will veer around the RJD and let Lalu perpetuate his dynasty.

The BJP has also sent out a message that its allies are at its mercy.

The allies cannot pressurise or bargain with the BJP any more. The Coalition Dharma of consultation and adjustment is almost non-existent now.

Another takeaway from the reshuffle is that it tilted towards the upper castes, more specifically in Bihar and Uttar Pradesh.

Inducting a Brahmin, Ashwini Chaubey, and a Rajput, Raj Kumar Singh, from Bihar seems to suggest this though another Rajput from the state, Rajiv Rudy, was eased out of the ministry.

R K Singh, a former Union home secretary, has been critical of Hindutva forces, particularly in some blast cases. Moreover, he was the district magistrate in Samastipur on October 23, 1990 when he had Lal Kishenchand Advani arrested, thereby halting the then BJP president's Rath Yatra at its peak.

The induction of bureaucrats may also be interpreted as a lack of talent pool within the BJP.

The BJP is also trying to send a message that it is consciously trying to build up a constituency of women.

The defence portfolio assigned to a woman and Smriti Irani running the information and broadcasting ministry may be interpreted in this way. If the BJP is really trying to build up such a constituency, then possibly in the near future, it will try pushing through the bill reserving legislative seats for women.

Subsidised LPG cylinders for a large number of households in Uttar Pradesh, by the way, was an important gamechanger in the 2017 assembly election.

The political Opposition inside the legislatures as well as on the streets look paralysed, only the pen-pushing critics and civil society groups offer some feeble criticism, saying that mere replacing the wheels will not do, and that a situation has arrived which needs a replacement of the engine.

Such voices are unlikely to create any effect given the fact that the leaderless Opposition continues to be in disarray.

In the mid 1970s and also in the late 1980s, a promising Opposition did arise with a leader emerging almost out of nowhere. Some critics of this regime therefore do harbour optimism.

However, one distinct difference this time is that the narrative of majoritarian nationalism and vilification of the religious minority is, at the moment, able to consolidate a significant support base for the BJP.

By virtue of this, it is able to gloss over its failures on various aspects.

Pro-corporate banking policies, farm distress, rising poverty and growing unemployment, scams, corruption and lawlessness in NDA-ruled provinces, and now the detection of a loss of Rs 5,000 crore to Rs 6,000 crore (Rs 50 billion to Rs 60 billion) in demonetisation -- all these seem to have been made ineffective in mobilising the people against the incumbency in the face of such hyper-jingoistic nationalism, and also in the wake of a discredited, leaderless, Opposition.

Professor Mohammad Sajjad is with the Centre of Advanced Study in History at Aligarh Muslim University.
He is the author of Muslim Politics in Bihar: Changing Contours (Routledge, 2014) and Contesting Colonialism and Separatism: Muslims of Muzaffarpur since 1857 (Primus, 2014). 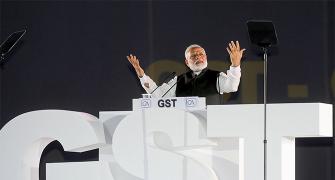 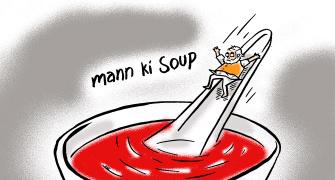