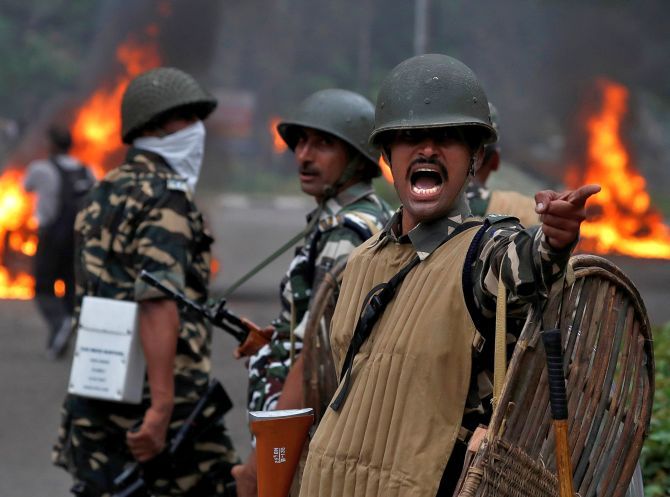 It was a "total collapse" in Panchkula, says Prakash Singh, the former chief of the Border Security Force, Assam and Uttar Pradesh police.

In an interview to Veer Arjun Singh, Singh says political procrastination and bureaucratic tardiness stopped the police from taking action against the followers of Gurmeet Ram Rahim, the self-styled godman who controls a large vote bank.

The riots that ensued immediately after the conviction of Dera Saccha Sauda chief Gurmeet Ram Rahim killed over 30 people and injured 250. What were the lapses from the side of the authorities?

There were lapses at every level.

There was political procrastination, bureaucratic tardiness and half-hearted action from the side of the police.

There was poor planning even after foreseeing a crisis.

It's my experience that when political directions are clear, firm and unambiguous, the authorities have no problem in dealing with such a situation.

It's only when the political leadership is not sure and signals that some action has to be taken, but may be not too harsh and acts only under political obligation that things get out of control.

This kind of political procrastination, where the authorities are careful about not letting their vote bank slide to the other side, leads to confusion.

Would you say some preventive measures by the police could have controlled the fallout?

Panchkula DCP (deputy commissioner of police) Ashok Kumar (who has been suspended) had issued a faulty prohibitory order that did not ban a gathering of five or more people as under Section 144 of the IPC (Indian Penal Code).

He merely put a check against carrying weapons and incendiary material.

The question it raises is whether it was inadvertent or deliberate.

If it was a mistake, then the DCP is incompetent and should be sacked.

But I don’'t think it was a mistake. I think he followed instructions, which may have asked to let the people come unarmed.

This is my hunch. No DCP would make such a mistake. He must have been given unwritten instructions by his bosses or his political masters.

The Punjab and Haryana high court reprimanded the Haryana government for the chaos. Was there a lack of will to act or was the police being cautious?

The Haryana government is privy to such large gatherings. The prohibitory orders had a grave lacuna.

I have a strong suspicion that the state government allowed this congregation. It should not have.

In context of unconfirmed intelligence reports, I believe the government had an idea that these people were collecting small arms, incendiary material such as petrol bombs et cetera.

If this is true, then it was an even bigger error on the government's part to not issue proper prohibitory orders.

It means that it believed that the followers of the self-styled religious icon would not indulge in violence.

Do you think more stringent action by the police could have reduced the scale of damage and loss of lives?

The epicentre of violence was Panchkula; the police should not have allowed so many people to enter the city.

Shepherding people back to their homes could have been a difficult exercise, but the police should have at least taken these people to designated areas such as stadiums or grounds before the verdict, unarmed them and contained them.

Either this was not done or not attempted or could not be accomplished.

Politicians from successive governments, both in the state and at the Centre, have paid their respects to the Dera chief ahead of elections. Was it his political clout that kept the police from taking strict action?

Yes, it is his political clout that has inhibited the chief minister, affected the bureaucracy and restricted the police.

I am very surprised that it is a failure at all levels.

Four people have to share the blame: The chief minister, the chief secretary, the additional chief secretary of home affairs and the DCP. All of them should be held accountable for the mess that cost over 30 lives.

The clashes with the police were a grim reminder of the Jat agitation in Haryana a few months ago. Has the police been soft or ineffective in dealing with chaos arising from sentimental issues?

They say a picture is worth a thousand words.

I saw one on the front page of The Indian Express in which the police was falling back in the face of the aggression from the rioters.

I feel ashamed. Yes, the police has been ineffective in tackling sentimental issues.

One of the greatest problems in the psyche of policemen is that they are not sure if their actions will be appreciated and defended in front of the judiciary. 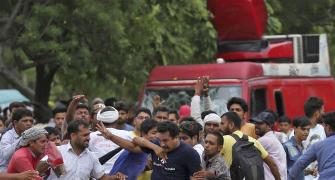 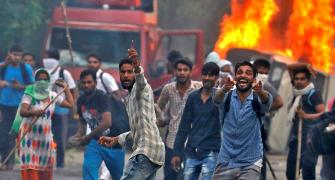 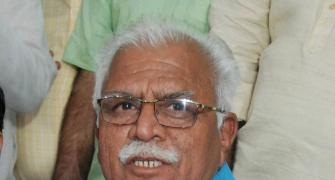 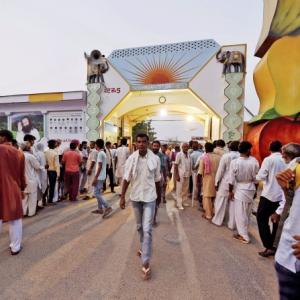 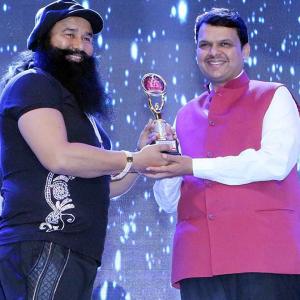