'China is constantly probing India's weaknesses.'
'The challenge is to implement a strategy that will allow India to buy time, gather its strength, and eventually counter China,' recommends Harsh V Pant and Vinay Kaura. 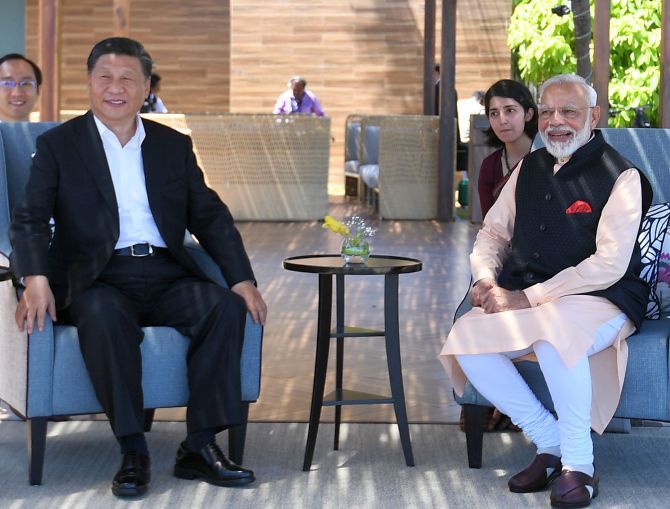 Although tortuous negotiation seems to have helped India and China in starting their disengagement from hotspots on the Line of Actual Control, the fear of being catapulted into yet another crisis along the disputed boundary remains ever present.

Xi Jinping's unabashed authoritarianism, his efforts to stiffen the sinews of the Chinese military machine, and his frantic efforts to position China as a strategic counterweight to the United States have all combined to create an unprecedented crisis in the existing international order.

India has also become a victim of China's ambitions.

Xi has been conducting an increasingly reckless and expansionist foreign policy, drawing on the enormous resources of a country at the height of its power.

While New Delhi is trying to reconstruct its China strategies in the light of Beijing's aggression, it is frequently confronted by harsh economic realities and an uncertain global strategic environment.

China's growing economic and military power has resulted in drastic changes in the regional configuration of power, which must prompt India to change tack even as Beijing's recent actions have taken bilateral ties back by at least half a century.

For the last few years, Prime Minister Narendra Modi has been seeking to craft a flexible and dynamic foreign policy for India, which now seems to have run into fierce opposition from an assertive and aggressive China.

For the Indian prime minister, it is essential now to establish a modicum of domestic consensus on how to deal with China, while embarking on much-needed internal reforms to strengthen India's overall State capacity.

Modi should channel India's formidable energy into the recovery of its natural place at the cockpit of global geopolitics.

This would require him to pursue a visionary foreign policy vision and magnanimous domestic politics.

The foundations of the Communist party of China are inherently authoritarian.

The Chinese expressions of civilisational pride go hand in hand with unchecked territorial revisionism, as an increasingly vocal Xi is trying to 'recapture' imperial China's possessions harking back to the ever changing past.

The cocktail of aggressive nationalism and Han exceptionalism is rendered more potent by the rise of India that Communist elites in Beijing have long perceived as their country's inferior.

Jammu and Kashmir has long constituted a territorial flashpoint among India, Pakistan and China.

For China, the inaccessible mountain passes in the Himalayan region provide one of the key land routes through which it can bolster its military presence in the Arabian Sea.

For India, the prospect of unquestioned Chinese domination over Jammu and Kashmir is an alarming one, adding to longstanding Indian fears of encirclement by the combined forces of China and Pakistan.

Furthermore, were India to find itself suddenly locked out of strategic territories in Ladakh, it would be a huge blow to its military strength, undermining its regional and global clout.

Modi's desire to position India not only as a counterweight to Chinese hegemony, but also as an arbiter of Asia's democratic future has been visible in some of his recent utterances, including the one at Nimu, Ladakh.

He is convinced that India's response to Chinese aggression should be tempered by prudence and not fuelled solely by passions on the street.

There are inherent dangers of a premature and angry response that could potentially confine India to a subordinate status in Asia.

Since Modi is aware of the growing power and malleability of public opinion in the era of nationalism, he will have to shape collective perceptions through targeted agenda setting.

The ideological counteroffensive launched by India must therefore be forceful, clearly expressed, and well-timed.

A unilateral, hubristic China, in its bid for great power status, is constantly probing India's weaknesses, and working to dilute its ability to maintain strategic maneuverability and project power across the Asian theatre.

The challenge is how to implement effectively a strategy that would allow India to buy time, gather its strength, and eventually counter China.

It is not readily evident if India is prepared to prosecute a two-front campaign against the combined might of China and Pakistan.

A strategy of protraction thus is not only required to muster material strength, but also to forge the necessary domestic political consensus.

However, New Delhi's quest for diplomatic equilibrium, along with its hopes for a peaceful settlement of disputes with China, is undoubtedly driven by an ambition, first and foremost, to maintain India's power and prestige.

China has pursued a lopsided policy that is consistently and aggressively hostile to India's core interests.

Beijing's overarching goal is to keep India in a state of disequilibrium that could be used to further erode its internal cohesion.

Weakening the Indian State provides China with greater latitude to exert control over its periphery.

China, with its heady ambitions, litany of historical grievances and overall ferocity, is the most dangerous revisionist power and great disruptor of the status quo.

China's conflict with India is not merely a struggle over territory and resources, but rather a paradigm-defining battle for shaping the international order.

Therefore, despite repeated instances of the fickleness of Trump's America as a credible ally, Indian policymakers will have to put a strong partnership with the United States at the very centre of India's grand strategy.

Modi's leadership role must encompass the redefinition of the mission of Indian diplomacy, along with institutional restructuring of the country's foreign policy vision.

Modi must take lead in shaping global political realities so that his vision for Indian foreign policy -- New Delhi playing a leading role in an Indo-Pacific landscape of democratic nation-States whose relations are defined by rules-based international order -- is one that endures Xi's world of raw power politics.

As India redefines its priorities vis-à-vis China, its policymakers will have to be bolder in articulating their need for robust partnerships, including that with the US, so that a new regional equilibrium can be attained not only to balance China but also to ensure wider peace and prosperity. 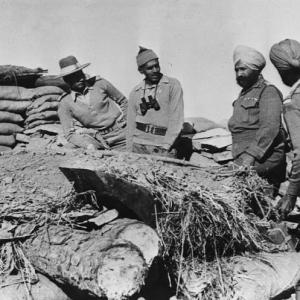