News
Business
Movies
Sports
Cricket
Get Ahead
Money Tips
Shopping
Sign in  |  Create a Rediffmail account
Rediff.com  » News » What the US withdrawal from Afghanistan means

What the US withdrawal from Afghanistan means 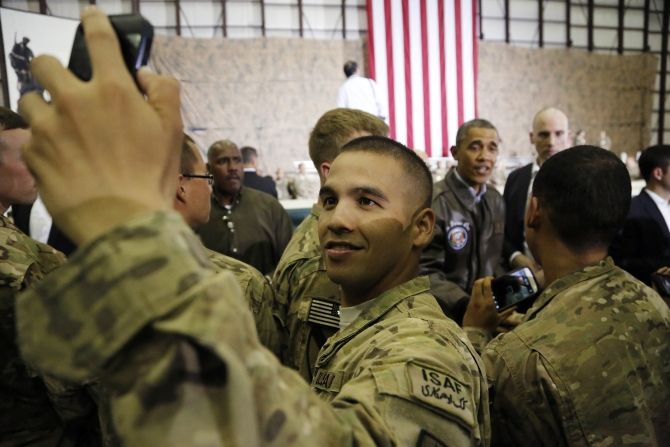 'Obama's decision to end the US military involvement in the Afghan civil war needs to be welcomed as a positive development for regional security and stability.'

'India, too, has a great opportunity opening up here if it plays its cards in sync with the spirit of the times rather than continuing to view the Afghan problem in zero-sum terms,' says Ambassador M K Bhadrakumar.

When it was made, finally, on Tuesday at the Rose Garden on the White House lawns in Washington DC, it couldn't have had any real surprise left in it -- President Barack Obama's announcement on how he is bringing 'America's longest war to a responsible end.'

The US-led war in Afghanistan has been grinding to a halt for quite some time already.

Yet, Obama sprang a surprise, a big surprise. He notionally gave in to the Pentagon's demand that an absolutely irreducible minimum of 10,000 US troops should remain in Afghanistan beyond this year. He chalked up a figure of 9,800.

But then he added the caveat that this number would come down by half in a year's time by end-2015 and the remaining troops shall thenceforth be confined to two locations -- Kabul and Bagram -- and, furthermore, that there shall be a complete drawdown by end-2016.

This is vintage Obama. Call it by any other name, but Obama has in reality decided to exercise the 'zero option' to be implemented through the next 30-month period.

Without even acknowledging it, he neatly de-linked it from the signing of the US-Afghan Bilateral Security Agreement (which is now a certainty as soon as the next Afghan president takes over in July.)

'The bottom line is it's time to turn the page on more than a decade in which so much of our foreign policy was focused on the wars in Afghanistan and Iraq,' Obama said. He is redeeming an important election pledge that he'd bring the warriors home.

There was no triumphalism in Obama's announcement -- no victory cry, no bragging of 'Mission Accomplished', not even airy claims or his famous rhetorical flourish.

In fact, Obama was rather philosophical -- Yet, this is how wars end in the 21st century -- not through signing ceremonies...

Obama rationalised his decision primarily in terms of the US' priorities -- the war needed to be brought to an end -- having lasted 'longer than many Americans expected.' Period.

Indeed, some of the resources saved by ending the war could be redirected 'to respond nimbly to the changing threat of terrorism, while addressing a broader set of (foreign policy) priorities around the globe.'

So, this is not quite a 'standalone' decision, either. Later, in a major speech at West Point on Wednesday, he embedded his decision within what is being lately talked about as the 'Obama Doctrine.'

The Obama Doctrine is emphatic that there shall be 'no useless wars' anymore in which American troops will get entangled.

The US will instead strive to pursue its global strategies by broadening its tools 'to include diplomacy and development,' while the 'threshold of military action must be higher.'

To quote from the West Point speech, 'Here's my bottom line: America must always lead on the world stage... But US military action cannot be the only -- or even primary -- component of our leadership... Just because we have the best hammer does not mean that every problem is a nail.'

Plainly put, Obama has come to the conclusion that no good US national security interest has been served by the US' extended stay in Afghanistan and it is high time to extricate the troops.

Where does that leave Afghanistan and the region?

A senior US official who annotated Obama's decision in a media briefing claimed that the primary objective of the war has been achieved, namely, to vanquish the Al Qaeda leadership ensconced in Afghanistan.

The US will continue the hunt for Al Qaeda, but the theatre has shifted from the so-called AfPak region -- to Yemen, Syria, Libya and so on.

In sum, it is important to understand at this point that the Taliban have never really been the US' 'enemy' in Afghanistan and the decision to pull out all troops returns the conflict to its status of civil war.

'Our objectives,' Obama said, 'are clear (beyond 2014): Disrupting threats posed by Al Qaeda; supporting Afghan security forces; and giving the Afghan people the opportunity to succeed as they stand on their own.'

He never once mentioned the Taliban.

The clincher here is how far he (and his successors) will keep the promise to support Afghans 'for years to come' with financial and development assistance.

That is the key question. The resilience of the Afghans to tackle their security challenges was never really in doubt and Obama took note of it as a major factor behind his decision.

But Afghanistan critically needs the support of the international community in terms of financial, technical and development assistance without which it cannot survive. The US should not repeat the mistake that the Soviet Union made of cutting adrift Dr Najibullah.

On the plus side, the new president being elected in Afghanistan enjoys a level of legitimacy that Hamid Karzai never really enjoyed.

Dr Abdullah Abdullah, who might be the most likely winner, does not carry the opprobrium of being an 'American puppet.'

Abdullah's credentials as an Afghan nationalist have never been in doubt -- and Pakistan knows it, too.

Pakistan would know it cannot get away with playing smoke and mirrors with Dr Abdullah, as it could do with Karzai. The withdrawal of the US troops by end-2016, therefore, lends a sense of urgency to the Pakistani calculus on Afghanistan.

It ought to be a nightmarish scenario for Pakistan that the US would be leaving Afghanistan without linking its exit with the Taliban's reconciliation.

Therefore, it is a fair guess that Abdullah's chances of negotiating a settlement with the Taliban might be much higher than Karzai's.

All in all, Obama has a point in claiming credit that the US is withdrawing from the war after dealing 'decisive blows against our adversaries' (Al Qaeda) and successfully making 'transitions to elected governments.'

Equally, the US military presence in Afghanistan was a major contributing factor behind the instability in Pakistan.

Of course, Pakistan's importance still remains. Obama underscored that the new shift in the US' counterterrorism strategy involves building up the capacity of the regional States to shoulder the burden and working with them without having American 'boots on the ground.'

But the US drone attacks on Pakistan have become a thing of the past. The withdrawal of troops also eliminates NATO's dependence on the transit routes via Karachi Port.

All this taken into consideration, the factors that led to the groundswell of 'anti-Americanism in Pakistani society could gradually begin to dissipate and, in turn, the US and Pakistan are in a better position than in very many years to turn a new page in their relations.

India, too, has a great opportunity opening up here if it plays its cards in sync with the spirit of the times rather than continuing to view the Afghan problem in zero-sum terms.

Taking a leaf out of the 'Obama Doctrine', India too can play a creative role politically and diplomatically by encouraging Pakistan to nudge the Taliban to negotiate with Abdullah.

The bottom line is that Abdullah is an old and trusted friend of India and Delhi should be able to live with any whichever settlement he reaches with the Taliban (with Pakistan's help).

However, in the first instance there has to be a paradigm shift in the Indian thinking, which has been one-dimensional so far, riveted on a blind belief that Pakistan will inevitably pitch for an outright Taliban takeover in Afghanistan by next year.

The plain truth is that Pakistan should have a great deal to worry from a Taliban takeover in Afghanistan. Pakistan is hardly coping with the blowback from the tribal areas bordering Afghanistan.

In any case, Pakistan's capacity to project power into Afghanistan is very limited today and the Taliban lack the overwhelming superiority needed to vanquish the Afghan armed forces.

The Taliban can at best force a stalemate, but then the debris of a prolonged conflict will keep falling on Pakistan only.

Unlike in the mid-1990s, Pakistan will have to factor in that the Kabul government is a representative government enjoying international legitimacy and credibility.

That is to say, cross-border terrorism across the Durand Line is one thing, but a replay of the outright invasion of Afghanistan as in the mid-1990s is simply out of the question.

Pakistan cannot all over again get away with flying the Taliban's 'air force', driving its tanks, providing it with intelligence, drawing up its battle plans, inducting the Pakistani regulars and, of course, bankrolling the entire enterprise with gasoline, food, clothing and what not -- all that it did in the Mujahideen-led Afghanistan to catapult the Taliban to power in Kabul in 1996.

All factors taken into consideration, therefore, Obama's decision to end the US' military involvement in the Afghan civil war needs to be welcomed as a positive development for regional security and stability.

The Western occupation of Afghanistan only helped the Taliban to carve out a 'resistance' platform. Continued Western military presence would have ensured the prolongation of the Taliban insurgency.

From the geopolitical perspective too, an open-ended American military presence in Afghanistan would have raised suspicion about the US' regional strategies. The region, of course, will do exceedingly well to sidestep big-power rivalries.

Image: A US soldier takes a 'selfie' as President Barack Obama greets troops at Bagram Air Base in Kabul. Photograph: Jonathan Ernst/Reuters 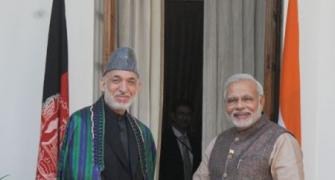 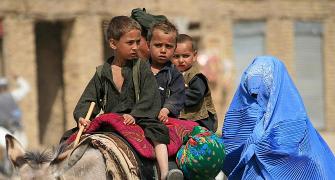 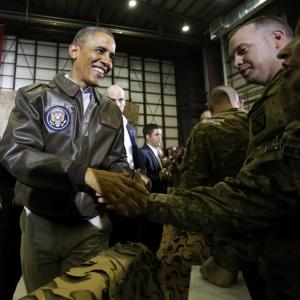 IN PHOTOS: Obama's surprise visit to Afghanistan to thank troops