The Modi government has been put on notice.
Will it buckle under such pressure?
These are times when the moral fibre of the leadership makes all the difference, observes Ambassador M K Bhadrakumar. 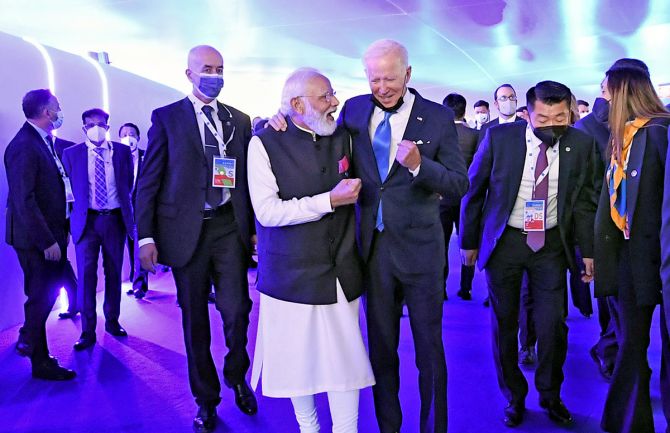 Pegasus, CAATSA, Nagaland -- prime facie, they have nothing in common.

At least, reading the Indian press, one gets that impression.

But it is always important to connect the dots to understand where the trail is leading to.

The Biden-Harris administration is sensing that the Modi government, a perceived ally, is not to be seen as its war machine revs up in anticipation of a horrific war.

Typically, if a country is not with the US, then, it must be against it.

But India falls in a category by itself.

The Modi government is going to come under immense pressure in the coming weeks and months from Washington to move into the Western camp on the burning issues of Ukraine and NATO's further expansion, which would 'change the world', as President Biden framed the paradigm in stark historical terms last week.

To recap, since 2014, the Modi government has gone far beyond any previous Congress-led regimes in taking India to the American stable.

It has been a dangerous poker game, in which the ruling elite, weaned on Chanakya, was sure it would ultimately outwit Washington.

It is always a seductive thought that you could cherrypick.

But, in a superpower's orchard? And, more so, from Joe Biden's kitchen garden? It was sheer naivete.

Biden has already announced that by April, once he's finished with Eurasia, he is heading for Asia-Pacific for the next summit of the QUAD, which Japan is hosting!

The QUAD is transforming as a vehicle to push the 'dual containment' strategy against both China and Russia.

The White House claimed on January 21 that Japanese Prime Minister Kishida pledged to Biden (external link) to 'continue close coordination with the United States, other Allies and partners, and the international community on taking strong action in response to any attack' by Russia on Ukraine.

Japan is not even an Eurasian power, yet it knows what to do as the US's vassal State.

Against such a complex backdrop, US state department spokesman Ted pPrice posted a reminder when asked at the press briefing Thursday by one Michel, 'Given the unprecedented tension you have with Russia, what impact does India's decision to buy S-400 from Russia -- the supply already began -- has on your bilateral ties with India?'

Of course, such questions are never accidental.

Price replied: 'Well, in many ways this doesn't change the concerns that we have with the S-400 system. I think it shines a spotlight on the destabilising role that Russia is playing not only in the region, but potentially beyond as well.'

'When it comes to CAATSA sanctions, you've heard me say before we haven't made a determination with regard to this transaction, but it's something we continue to discuss with the Government of India, given the risk of sanctions for this particular transaction under CAATSA.'

'Whether it is India, whether it is any other country, we continue to urge all countries to avoid major new transactions for Russian weapon systems... I don't have a timeline to offer, but these are issues that we continue to discuss with our partners in India. Michel.'

Coincidence or not, on the same day as Price spoke, the New York Times' stunning story on Pegasus appeared.

Admittedly, it is not an exclusive story about on India, but Prime Minister Modi was singled out as a case study.

Indeed, it pins on PM Modi personally the decision-making on the sale of a package of sophisticated weapons and intelligence gear worth roughly $2 billion -- with Pegasus and a missile system as the centrepieces.

Evidently, there has been some media leak with high level political clearance in Washington.

The Pegasus story is still playing out in the Supreme Court, so let us leave it at that.

Perhaps, even more damning, from a long-term perspective, would be the Times feature on Nagaland titled 'In India's Militarized Regions, Calls for Ending Impunity' which, strangely enough, appeared on Saturday.

The Times holds a piercing searchlight held on a dark corner of our country -- the Indian Army's alleged atrocities on the Christian population of Nagaland.

Of course, within India itself, there is a significant body of responsible opinion -- including one former home secretary -- who would share the estimations in the Times story.

However, the point is something else: On successive days, the Times, a hugely influential opinion maker in the world community, has portrayed Modi's India as a country without rule of law with a state apparatus that is insensitive, brutal, oppressive.

Taken together with Ned Price's remarks, the Modi government has been put on notice.

Will it buckle under such pressure? These are times when the moral fibre of the leadership makes all the difference.

The core issue is that an elected government's primary duty is to safeguard the national interests.

In this case, any bandwagoning with the US-led apple cart lurching toward Russia or China is almost certain to meet with a disastrous ending.

All four of them are supposedly Washington's allies.

Yet, they have chosen to mark their distance ostentatiously from the Biden administration's ill-fated strategy in Eurasia and Asia-Pacific, which in their reckoning is doomed to unravel with disastrous consequences.

Cracks have appeared within the Western alliance.

Only (post-Brexit) Britain, which is raring to go 'global', shows enthusiasm.

Simply put, the European allies will now be doubly sceptical about Biden's incoherent approach toward China.

The Chinese ambassador to Washington Qin Gang has publicly warned, 'If the Taiwanese authorities, emboldened by the United States, keep going down the road for independence, it most likely will involve China and the United States, the two big countries, in the military conflict.'

India's interest lies in navigating its own pathway toward China and Russia, two consequential relationships in its foreign policy.

Arguably, the reimposition of the US's global hegemony will not be in India's long term interests, which would lie firmly in the emergence of a multipolar world order based on the UN Charter where it is well-placed to fulfil its responsibilities as an independent player with its strategic autonomy intact. 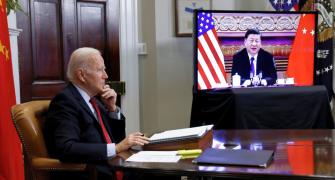 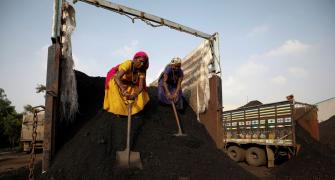 Why India was made the Fall Guy at COP26 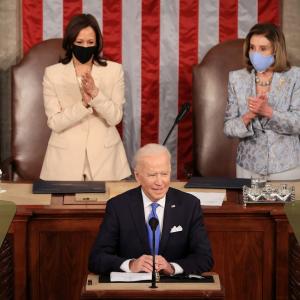