Washington is signalling to Delhi that it can rely on American support in any great game vis-a-vis China.
Delhi shouldn't fall into the trap, argues Ambassador M K Bhadrakumar. 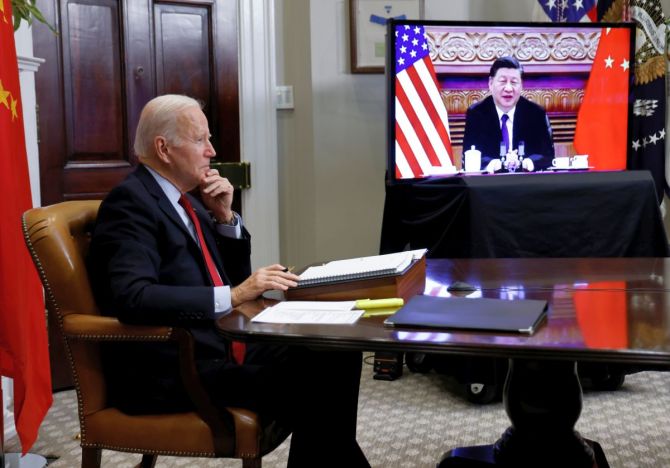 The cracking sound of ice breaking on the frozen lake of India-China relations will trigger a new wave of US-backed media campaign to instigate the hawks.

Armed with satellite imageries made available from the US and peppered with random, free-wheeling remarks by garrulous Indian ex-generals and academics, the Washington Post has drawn attention to the Ladakh region.

A feature article in the Washington Post ostensibly reporting from the construction site of the $600 million Zoji La tunnels in Kargil, Ladakh, is backed by imageries from Maxar, known to be 'the indispensable mission partner' of the US government, providing satellite imagery and expert intelligence.

The Americans know from experience that it takes just 3 minutes to raise dust in Delhi, as the well-known diplomat Robin Raphel once boasted a quarter century ago.

At the high noon of the standoff in Ladakh last year, Indian experts were freely provided with satellite imageries from the Australian Strategic Policy Institute. But ASPI is taking a back seat now.

Its hands are full with 'research topics' assigned by its sponsors regarding China. The ASPI is funded by the Australian department of defence and intelligence agencies and defence industries and by the US department of state -- and, incidentally, its mandate includes 'talent recruitment.'

The US interference in the Sino-Indian relationship is as old as the hills. In the period ahead, there is going to be much activity on this front.

Inciting the hawkish public opinion in India is the best means to forestall any modus vivendi in India-China relations.

The disclosure on December 15 (external link) by a top Kremlin official that Russian President Vladimir Putin discussed with Chinese President Xi Jinping the topic of a Russia-India-China summit meeting must have set alarm bells ringing in American circles.

Meanwhile, there have been other signs too of an incipient rethink in Delhi on the wisdom of hitching the Indian wagons to the QUAD at a juncture when US politics is becoming highly unstable and the efficacy of the Biden administration's Indo-Pacific strategy is in serious doubt.

Biden's own political future is being discussed animatedly in the US. The Indo-Pacific strategy is being reduced to the stuff of rhetoric by the state department.

Of course, Secretary of State Antony J Blinken is good at hyperbolic rhetoric, but what's there in it for India?

Even the fate of the QUAD's vaccine manufacturing plans remains unclear until the true characteristics of Omicron, the new coronavirus variant ravaging the western world, are better understood.

With compelling signs that the US is once again shacking up with the Pakistani generals and the Taliban over Afghanistan and Central Asia, what option does India have but to work on creating a peaceful external environment that enables it to sustain its development strategy?

Contrary to earlier indications, the S-400 missile defence system from Russia is going to be deployed in Punjab.

The heart of the matter is that peace has prevailed in Ladakh for close to a year-and-a-half. Doomsday predictions have withered away.

It's clear by now that China is keen to keep things this way and is not seeking to create new facts on the ground so that with tensions steadily lowering and emotions calming down, the diplomats and political leaderships can start working on the root causes of the standoff ensuing from what Beijing calls India's 'forward policy'.

The Chinese commentators have instantly warmed up to the Pradeep Kumar Rawat's appointment as India's next envoy to Beijing.

'Rawat understands China much better than some dilettantish, so-called China hands... An important reason for Rawat's appointment is his understanding of China and the potential of promoting effective communication in the face of the current stalemate... Modi administration has made the decision to appoint a "China hand" as its ambassador to China, which is itself a signal. India may want to seek a breakthrough.'

The best part about the Chinese expert opinion on Indian diplomacy, in general, must be their insightful grasp of the sub-soil of what passes for 'China watching' in our country.

Indeed, the signs are that there are stirrings in the Sino-Indian discourse (external link).

The stakes couldn't be higher for the Biden administration's Indo-Pacific strategies if India careers away at the present juncture in regional politics to pursue independent non-aligned foreign policies toward China.

The signs are there alright.

India stayed away from the recent G7+Five Eyes+EU conclave in Liverpool with an express agenda to badmouth on Russia and China. It was the only QUAD country to be absent.

Again, at the UN Security Council, Russia, China and India introduced a draft resolution on Sahel security (external link) after the bloody Western intervention in the region backfired (as in Afghanistan.)

Indeed, the deployment of the S-400 missile system in the teeth of US opposition speaks for itself.

Can it be coincidence that against the above complex backdrop, on Monday, Blinken designated one of his deputy under-secretaries of state Uzra Zeya to serve concurrently as the US special coordinator for Tibetan issues?

The state department readout (external link) states that Zeya will 'will promote substantive dialogue, without preconditions' between Beijing and the Dalai Lama, 'his representatives, or democratically elected Tibetan leaders in support of a negotiated agreement on Tibet'.

And her charge includes attending to 'the humanitarian needs of Tibetan refugees and diaspora communities' and ensuring that US diplomats get access to the Tibet region.

Zeya, a plucky Indian-American diplomat, will be Blinken's eyes and ears in Delhi and Dharamshala.

After Hong Kong and Xinjiang, Tibet has also entered the spotlight for the US' Indo-Pacific strategy.

A group of US lawmakers has called on President Biden to receive the Dalai Lama in the White House.

Washington is signalling to Delhi that it can rely on American support in any great game vis-a-vis China.

Delhi shouldn't fall into the trap. 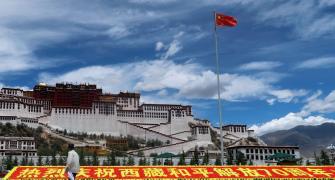 What is China's action plan for Tibet? 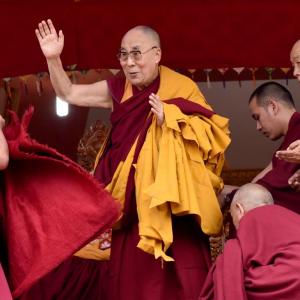